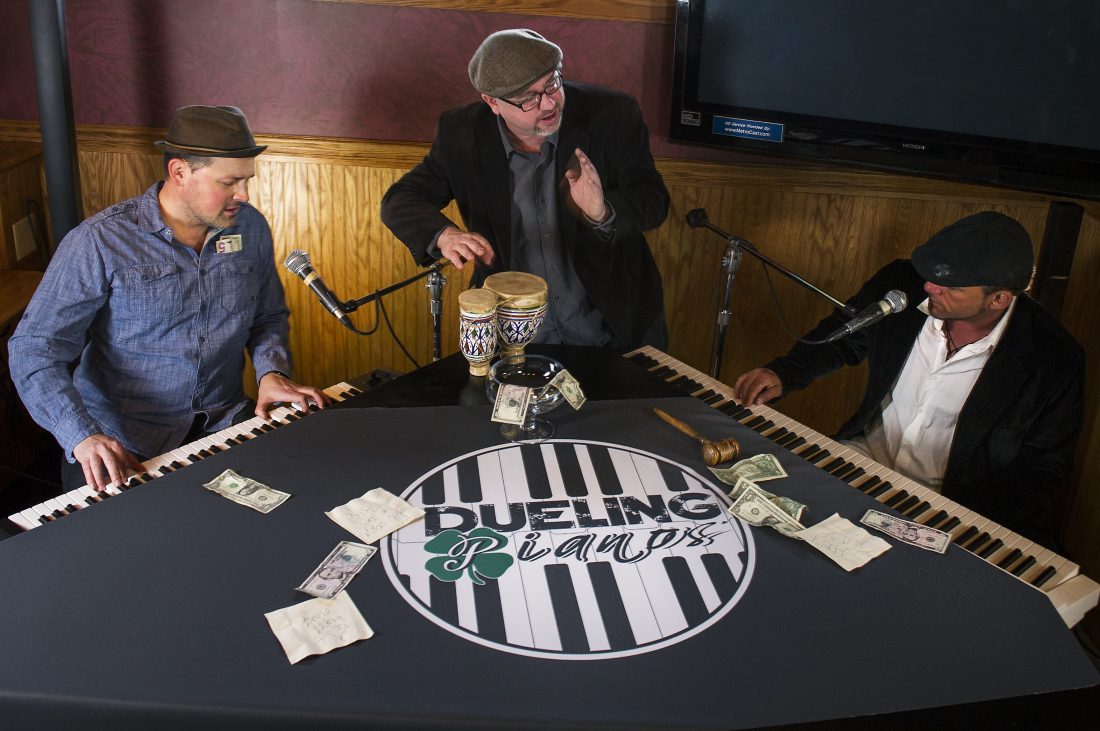 GILFORD—As musician Jon Lorentz describes it, Dueling Pianos at Patrick’s Pub & Eatery is somewhere on the entertainment scale between watching a cover band and a stand-up comedian. “It’s more about having fun than trying to light the music world on fire,” he said.

Though the concept traces back to the 1890s, Dueling Pianos is a popular entertainment offering at the pub today. Launched three years ago by Lorentz—a longtime and well-rounded musician—Patrick’s version has its own unique style.

Lorentz admits the musicians don’t actually duel. “It’s more of a volley,” he said with a laugh, noting the competition is all in jest. “We try to get through as many requests for as many customers as we can.”

The duels will start back up on May 24, and Lorentz and three of his colleagues— Gardner Berry, Jim Tyrrell, and Matt Langley—are ready to take the stage.

From 8:30 to 10:30 on Friday nights, two keyboardists face one another on the Patrick’s stage. Patrick’s customers serve up song requests that Lorentz said run the gamut from Beethoven’s “Ode to Joy” and jazz standards like “Fly Me to the Moon” and “Georgia on My Mind” to Billy Joel and Elton John tunes, and hip hop and pop.

“It’s set up to look like a grudge match,” Lorentz said. “We get the crowd excited to come up with song requests. No style is off limits. Customers come up, and we pass the requests back and forth to see who will play what.”

Berry said, “It’s great fun. Nobody takes themselves too seriously, and we all have our own niche, which allows us to be quite successful at fielding the various requests.  Patrick’s is a wonderful venue, staffed with great people, and friendly customers.”

Patrick’s has been hosting live music since it opened in 1987, originally featuring mostly Irish music. After Jeff and Allan Beetle purchased the pub in 1994, they began to expand the music offerings. “We like to say we’ve brought some American spirit to the Irish ancestry of this pub,” Allan Beetle said.

“During Dueling Pianos, it’s awesome to have such talented musicians performing classics on request,” Beetle added.  “Live music is part of our DNA here at the pub, helping to create great experiences for our guests.”