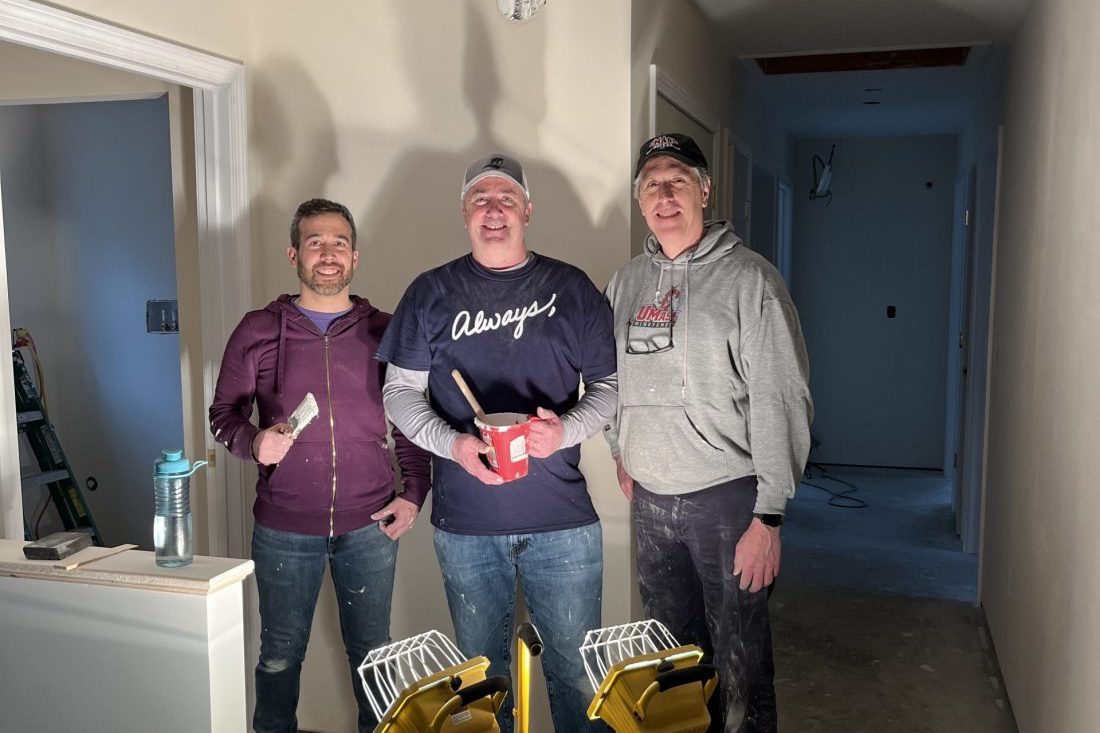 FLORENCE—Florence Bank recently renewed a $30,000 pledge to Pioneer Valley Habitat for Humanity, and in another celebration in the longtime partnership between the two organizations, a leader at the bank has joined the nonprofit’s board of directors.

Jim Hickey, vice president / director of marketing operations at the bank and a resident of South Deerfield, began a three-year term on the 15-member board last night.

The gift and new board participation are signs that the decades-long relationship between Florence Bank and the local Habitat organization continues to deepen. The range of involvement is wide.

For instance, Florence Bank recently agreed to serve as the applicant partner with Pioneer Valley Habitat to secure a $96,000 grant from Federal Home Loan Bank of Boston provided to entities offering low-income and affordable housing; the funds would offer $32,000 per build on three current projects.

Bank staff also volunteer on construction sites around the county, doing everything from swinging hammers to painting and landscaping; this year, the bank sent teams that helped complete two homes in Pelham.

Florence Bank has been a sponsor for Pioneer Valley Habitat events, and the nonprofit last year was a first-time recipient of a Customers’ Choice Community Grant. The nonprofit even holds accounts with Florence Bank.

“The bank has been a partner in so many dimensions,” Landry said. “Florence has checked all the boxes from sponsoring to contributing financially to volunteering. That makes the bank a special friend to us.”

The relationship between the two organizations began almost two decades ago, when the bank began donating to Pioneer Valley Habitat. The bank has increased its support over time and has pledged $10,000 per year since 2015 to support local projects.

“They see the importance of giving at a certain level to have an impact,” Landry said, noting that the bank’s multi-year pledges offer reliable leadership revenue to the organization.

Some years, bank funds support construction costs on that year’s home builds; one year, the gift covered costs associated with volunteer appreciation and retention efforts, and another, the pledge was used as a matching challenge that boosted fundraising efforts.

Habitat for Humanity International is a global nonprofit with a mission to build affordable housing for families who may not qualify for traditional bank mortgages. Pioneer Valley Habitat operates with four staff members, and Landry said the organization is largely volunteer-driven.

In past years, the organization built two houses per year, and this year for the first time, it will build four—three in Northampton that Florence Bank is sponsoring and one in Conway.

As the cost of construction rises in the region and beyond, Landry said the gulf between those who can afford to buy a home and those who can’t is growing, making Habitat’s work even more critical.

“To the extent that we can support people who are ready to be owners of affordable homes, Florence Bank is a partner with us in that. That’s a big influence,” Landry said. “They’re helping us one family at a time—three families this year.”

She noted that homeowners who move into Pioneer Valley Habitat housing become tax-paying residents who build roots and have an impact themselves. “Transformation happens across the Habitat community. It’s about neighbors helping neighbors, and it’s nice when you can think of a bank as a neighbor.”