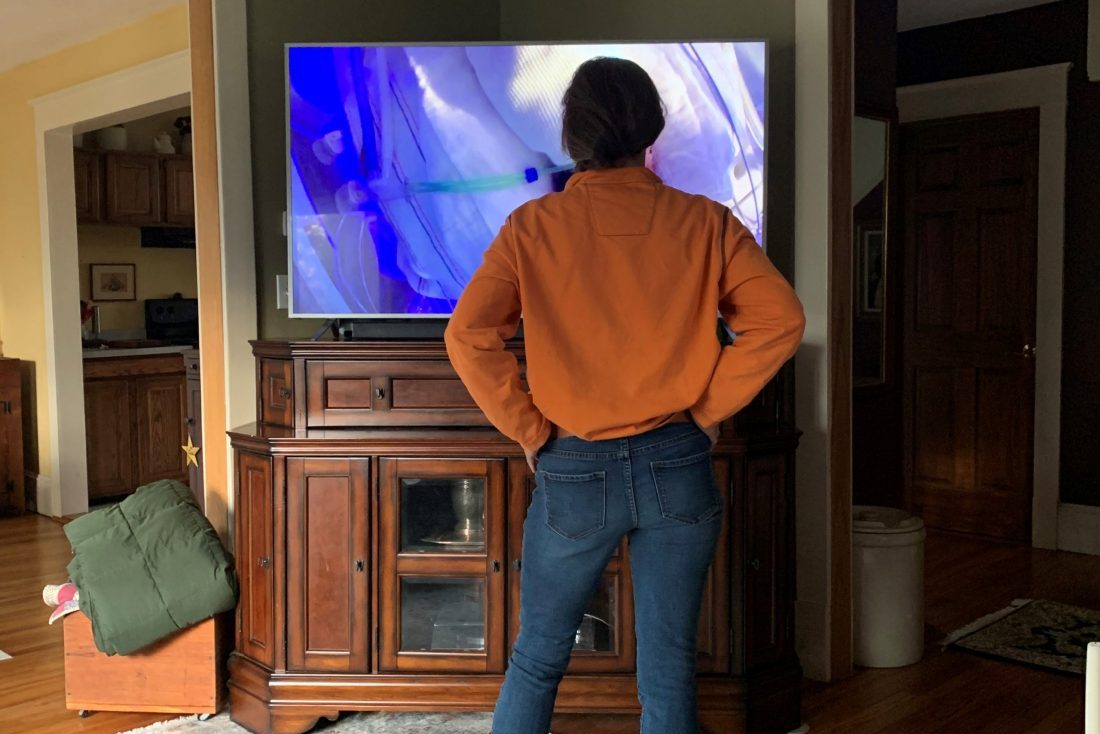 By far the best pastime is watching my new baby granddaughter, Phoibe, on a webcam provided by Baystate Health, where she was born on March 29. Phoibe has to hit some more milestones before she can come home to her family, so she’s living in the NICU; my daughter and her husband can only visit one at a time, so they alternate days.

No other visitors are allowed. Like, you know. Me.

On April 4, my daughter texted me a link and passcode. When I signed in, there was little, tiny Phoibe on my phone, in her incubator, snoozing. I figured out how to blow her up on Jacques’ big, giant television, and I’ve been watching Phoibe TV ever since.

Best show. Ever. (I can’t prove it by showing you a screen shot or live feed, as that’s against the rules. Just trust me that it’s captivating.)

I was terribly worried about Phoibe at first. She is a medical miracle. Weighing in at just under two pounds at birth, she was healthy and strong for a preemie, but in the photos I saw, she wore scary equipment—such as feeding and oxygen tubes and a heart monitor.

Watching her on the television, I can see that the technology doesn’t disturb her and that she is really just like a newborn in so many ways. Watching helps soothe me.

Much of the time, Phoibe is on her right side with her left leg sticking straight up in the air. She balls her hands into fists. She stretches and jerks involuntarily, especially when a nurse pokes a hand in to reposition her.

But Phoibe looks cozy and content. The more I watch, the more I learn. I realized that the incubator mimics the womb. It is warm and kept at 70 percent humidity. The oxygen tube in her nose supplements the air she is able to breathe on her own. Wadded up cloth diapers keep her loosely held in fetal positions on her back, sides, and tummy. She is able to flail about, though. The nurses rotate her about every hour.

I was worried about Phoibe’s eyes when she was first born, as they were still closed, like a baby bird’s. She couldn’t open them. One night, on Phoibe TV, I saw they were open. Just little slits. But open.

My daughter Molly beat me to it, texting Sally and I. “Her eyes are open!”

“OMG!” Sal and I responded.

That’s the other fun part of Phoibe TV. My daughters and I text constantly.

Or, “What is the nurse doing now?”

Sally is a medical assistant, and she always knows the answer. She is the calmest among us.

The Baystate NICU nurses are simply amazing. They handle Phoibe nimbly and gently, listening to her heart, removing IV lines, changing diapers smaller than the palm of your hand, measuring her, flipping her over.

Every day there is a new milestone.

On April 5, they removed Phoibe’s feeding tube, which entered her body in the umbilical cord, and gave her a new IV in her arm. They attended to other routine matters and then swaddled her tightly in a soft, cloth diaper. The entire time, my phone was lighting up with texts.

“She looks so happy now.”