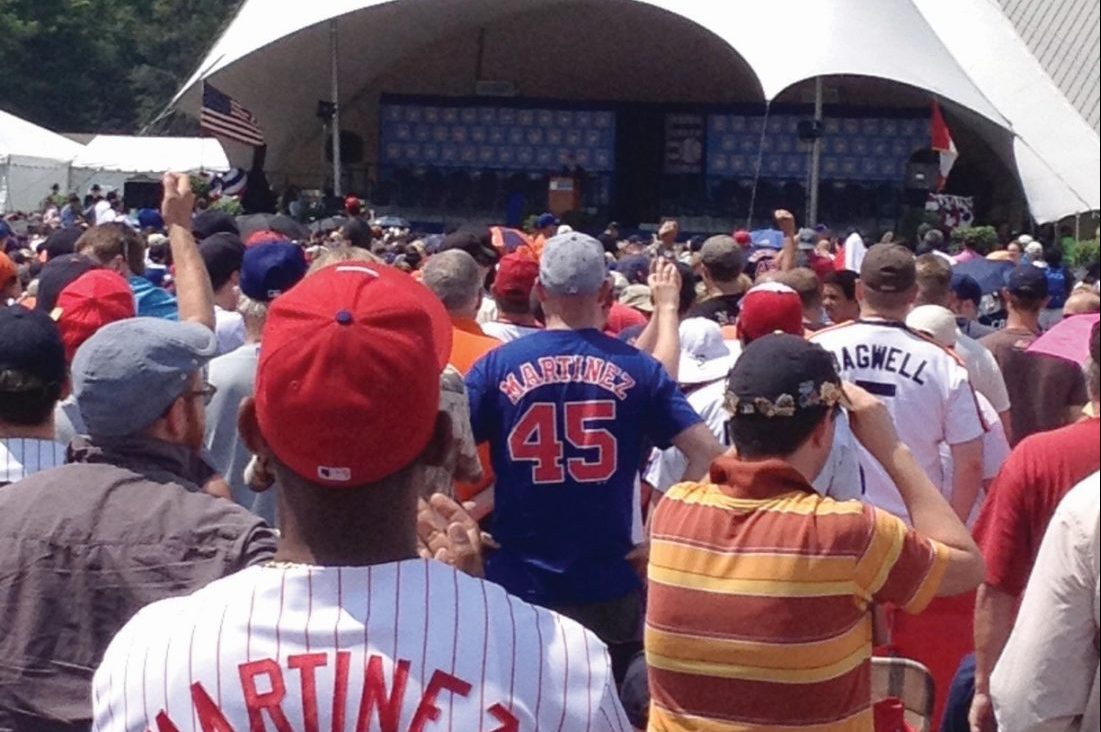 HATFIELD, MASS—When Dr. Fred White and his wife, Kathy White, traveled with Sports Travel and Tours this summer to witness the National Baseball Hall of Fame and Museum induction weekend, they expected to see some familiar, famous faces.

Fred White also recognized someone not quite as well-known on the streets of Cooperstown, New York.

While exploring the small town of about 1,800 residents, Fred saw writer Gary Kaschak talking on the phone. The author of “My Name Was Mickey Mantle” had recently been featured in the newspaper near the Whites’ home in Temecula, California. Fred White recognized Kaschak from the photo that ran with the article.

“When he was off the phone, we started up a nice conversation,” Fred White said. “He ended up interviewing us for the local paper. I bought a copy of his book from him, and he signed it. I later emailed him my thoughts about the book and how it reminded me of my childhood. Seeing him was probably the highlight of the trip.”

The Whites were repeat travelers with Sports Travel and Tours, a sports travel firm from Hatfield, Massachusetts.

Having found Sports Travel and Tours via the Baseball Hall of Fame website four years ago, the Whites have already done the Mid-Western tour to Chicago, St. Louis, Kansas City and Minneapolis, and The Lakes tour that started in Toronto and included stops in Detroit, Cleveland and Pittsburgh.

“On our first trip, we didn’t know anybody,” Fred White said. “But there’s always people on these trips who are very outgoing. We met Fred Soland, an electrical engineer from Houston, who was earning his Stadium Hall of Fame credentials by getting to all 30 major league stadiums. We’ve kept in touch since then and joined him on The Lakes tour, too.”

Like most Sports Travel and Tours customers, the Whites were avid baseball fans. They’ve held season tickets to the San Diego Padres for more than 30 years and have attended spring training in Arizona for more than 35. They were eager to take part in a Sports Travel and Tours induction trip and became even more interested when it was announced that Trevor Hoffman, a longtime Padres pitcher, would be inducted in 2018.

“A lot of people from San Diego went to Cooperstown for the occasion,” Fred White said. “The size of the crowd was 53,000. Gazillions of people show up, though so few people live there. Induction weekend is always special.”

The trip marked the fourth induction the Whites have seen live. In 2007, they traveled on their own to see Tony Gwynn’s induction, but Fred White said they much preferred the experience of traveling with Sports Travel and Tours.

“In my radiology practice, I’m involved in a lot of national events and meetings that require me to travel quite a bit, and I always have to worry about hotels and transportation,” he said. “When we work with Sports Travel and Tours, we pay one fee, and they take care of everything. It’s such a pleasure to have the opportunity to sit back while someone takes you to and from the hotel.”

Fred White said Sports Travel and Tours staff did a great job of keeping their travelers up-to-date and informed.

“The communication with Project Sales Coordinator Anthony Incampo is excellent,” Fred White said. “We’re always notified about what to do and when to do it, and we’re provided with whatever tickets we need. Sports Travel and Tours has a lot of class, especially because President Jay Smith leads from the top and has created a great organization.”

Over the years, the Whites have met sports stars—like former San Diego Padres pitcher Randy Jones and his wife, Marie Stassi, whom they spoke with in Cooperstown about his baseball career and battle with throat cancer—and they’ve also come to know Sports Travel and Tours’ guides.

“The thing that really catches me off guard is the knowledge of the guides,” Fred White said. “We met Mindy Strauss, a young woman from St. Louis who led the Grand Slam tour, and she was just so knowledgeable and willing to answer questions.

“The staff make us feel welcome and like a part of the organization,” said Fred White, noting that he and Kathy White will be traveling with Sports Travel and Tours every year. “That’s something you don’t find very often.”