Trumpeting a Volunteer and a Champion 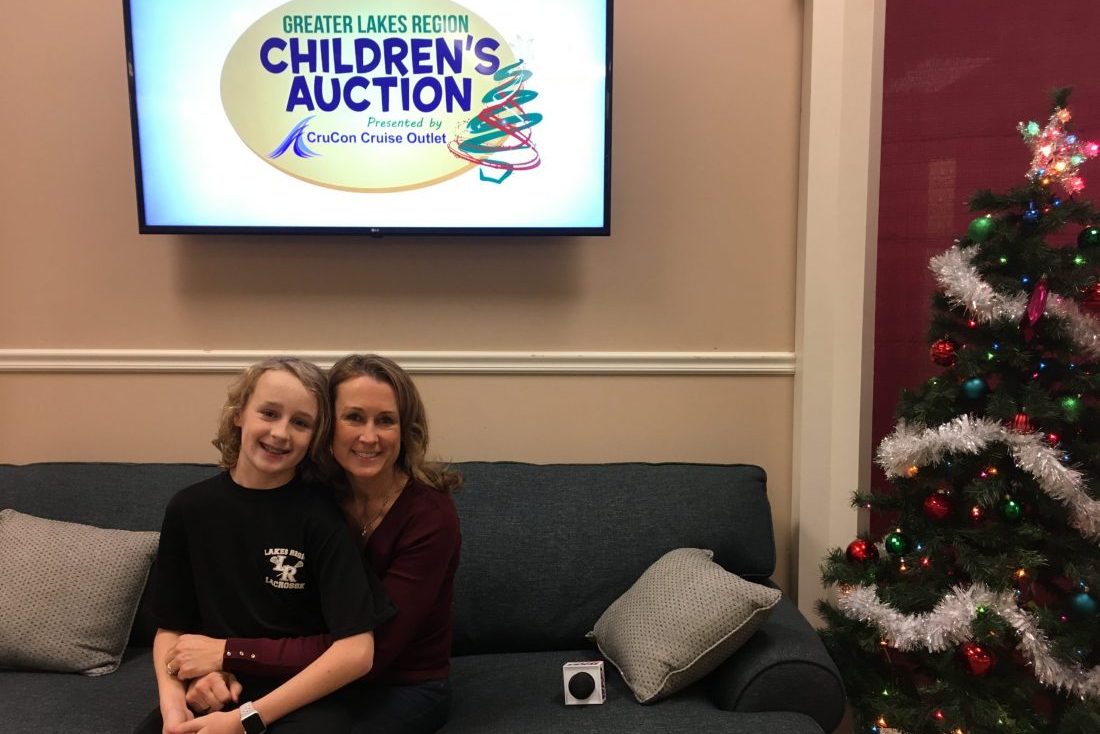 I support the Greater Lakes Region Children’s Auction in telling stories about volunteers who have offered the nonprofit their time and commitment for decades. This piece is on Jennifer McGreevy, who was named an Auction Champion late last year. Jennifer has been a volunteer for several decades.

Back in the day, Jennifer McGreevy’s work with the Greater Lakes Region Children’s Auction was as grassroots as opening the phone book and calling businesses at random to solicit donations. Then, she’d hop in the car, with her infant daughter Callie in tow, and pick up whatever was offered, sometimes driving as far as Center Harbor.

That was 20 years ago, before dozens of volunteers like Jennifer brought dramatic change to the Auction, building sets as well as protocols and implementing technological systems that keep the week-long event running smoothly and efficiently.

“There was a time when I was the nucleus at the center of the inputting station, where the items are donated, where they go on the block, the bid board, and the cashier station,” Jennifer recalls. “Now, I’m a part of a small piece of it all, overseeing all the cashiering and the items that have sold.”

The annual event that now supports 62 nonprofits in the Lakes Region raised $2,100 in its first year and $600,032 this year, its 38th. There has been tremendous growth and positive change, yet Jennifer can’t help but feel slightly wistful about “the old days.”

All those years ago, parents and children would come in or call the Auction center to make a request for help. “They might say, ‘I’m a mom with three kids, and I can’t pay for Christmas gifts,’” Jennifer remembers, getting teary. “The next thing we’d know, a volunteer would come with a truck with a bed and a comforter. It was pretty cool to be part of that.”

The support the event provides, while critical, is not individual or personal now. The Children’s Auction is a nonprofit, and it offers grants to nonprofits, which in turn have the direct contact and relationships with people in need. “We’ve gotten so big we can’t take individual requests,” Jennifer says, adding, “The money gets where it’s needed. It’s very heartwarming to be part of this. It’s remarkable what we’re able to do.”

Jennifer got involved with the Auction because her husband, David, was friends with founder Warren Bailey. “He said, ‘Come and help and get more involved,” Jennifer remembers.

She put her organizational skills to work. She created a system for managing the many gift certificates that were donated to be auctioned off. “I remember walking in and saying, ‘This doesn’t seem very efficient. There’s got to be a better way. Alphabetize them, or organize them by category or type,’” Jennifer says. “I helped modernize the systems.”

Thanks to R.J. Harding, the pen-on-paper method of tracking donations, which yielded hundreds of reams of paper over five days, has also been replaced with digital software. The only paper that remains are sheets that travel with the items on the bidding boards, helping the presenters learn about what’s being auctioned off and by whom.

David McGreevy has been key in the growth, too. In the event’s early years, when the Auction venue was a van, David helped find a vacant downtown space for it to be held, spearheading the beginnings of big change. As the owner of McGreevy Automotive at the time, David also drew on his relationship with Metrocast’s general manager Terry Hicks to help get the event televised for the first time in 1998.

Everyone in the McGreevy family takes part in the Auction, including the couple’s children—20-year-old Callie, 17-year-old Colin, and 12-year-old Carson. “It’s become a family tradition,” Jennifer says. “Carson begs me to take a day off from Gilford Middle School so he can volunteer backstage, and if his grades are good, he gets to do that.”

This year, Carson was at the Auction on Thursday, bustling around with his mother.

As the director of company partnerships with Boothby Therapy Services, which employs related service providers in schools across New Hampshire, Jennifer has the freedom to work remotely from the Auction most of the week. Boothby owners Christopher and Maren Boothby understand the drive to take part, as they are also active with the Auction and have been for many years; Christopher has sat on the board of directors.

Now that the Auction venue is a former department store, Jennifer can sometimes be found hiding out in a dressing room, working.

Juggling the demands of life and Auction ensure that at week’s end, Jennifer is exhausted. But she wouldn’t change a thing. “I love to be involved in something that is for the greater good,” she says. “It’s such a great sense of community.”