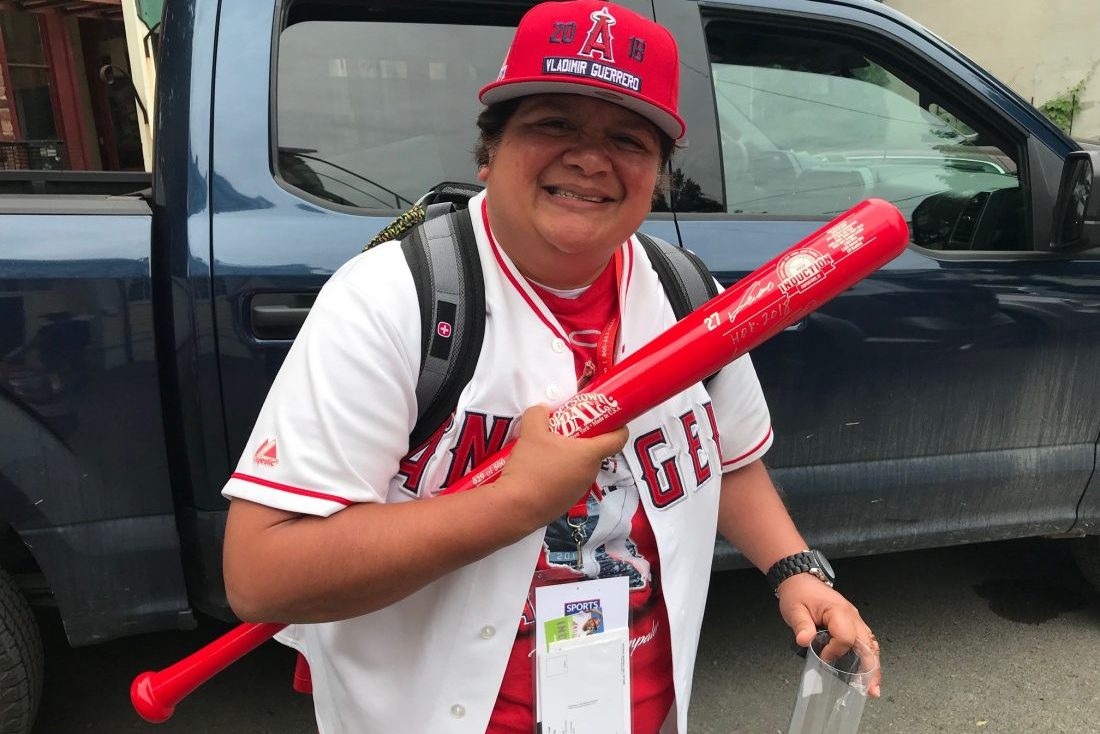 COOPERSTOWN, NEW YORK—When Rosie Romo was a kid, she watched Ozzie Smith, a shortstop with the St. Louis Cardinals, do backflips on the field to the amazement of everyone in the stands and the people watching on television.

She was also a huge fan of the Los Angeles Angels. “We were just a hop, skip, and a jump away from Angel Stadium,” she said, noting she grew up in Newport Beach, California. “I grew up watching them back when you could get tickets for $3.25. My brother, Jesse, and I would go together, and sometimes the rest of our family, too, including our four sisters.”

The Angels’ right fielder Vladimir Guerrero became a player of particular interest for Rosie, so when she learned last January that he would be inducted into the Hall of Fame this year, she began searching for tickets to the Cooperstown, New York, induction.

“I was really, really excited for the trip,” she said. “Once they announced that he was going to be inducted, the excitement really built up. He was such a phenomenal player.”

Rosie and her wife Dina Black, of Cypress, California, opted to travel with Sports Travel and Tours to catch this year’s Baseball Hall of Fame and Museum induction ceremony in July. Searching online, Rosie determined the sports travel firm based in Hatfield, Massachusetts, offered up the best deal, with the most opportunities to see baseball legends like Smith and Guerrero—up close and personal.

Walking around in Cooperstown in July, Rosie was able to get autographs from both of her heroes.

“The autograph signing took it over the top,” she said. “I bought a Cooperstown bat that they make for every player early on in our trip, just to have Vladimir sign it. By the end of the trip, everyone knew me. ‘Here comes Rosie with her bat,’ they’d say.”

At the signing itself, Rosie said she felt like a child at Disneyland. “I thanked Vladimir for picking the Angels,” she said. “We were just thrilled, and he was super nice.”

Rosie told Smith he was one of the reasons for her love of baseball. “He grabbed my hand and thanked me, and we got to take a picture with him. It was really neat,” she said.

Rosie and Dina arrived for the July 29 Hall of Fame induction ceremony a few days early, checking into their hotel room the Friday before. Then, they let Sports Travel and Tours’ guides take it from there.

“I have to say, it was really enjoyable, not having to worry about where to go, but just hopping on a bus and being taken around,” Rosie said. “It’s also nice to be around true baseball fans, like-minded people. We were engulfed with baseball—history, knowledge, heritage—and it began from the moment we met our tour guide.”

If travelers take advantage of the knowledge the Sports Travel and Tours guides possess, including retired umpire Al Clark, Rosie said they’ll come away richer for the experience. There’s also plenty of opportunities to connect with fellow baseball fans.

“You can learn so much from the guides if you ask questions,” she said. “Go in open-minded and make friends.”

One of the highlights of the trip was visiting the Baseball Hall of Fame itself, with plenty of time being allotted into the schedule for exploration. That was a good thing, Rosie said, because she and Dina could easily spend a few hours on each of the museum’s floors.

The induction ceremony itself provided another source of intrigue, when Sports Travel and Tours guests got the best seats in the house to watch their favorite players become Hall of Famers. “I was so pleasantly surprised to see how close we were at the induction ceremony,” Rosie said. “We had the two front rows!

“The trip was like layers on an ice cream sundae,” she added. “Every time you put your spoon in for another bite, there’s another scoop of something good.”