Creating Some Mania—for a Client, and for the Kids 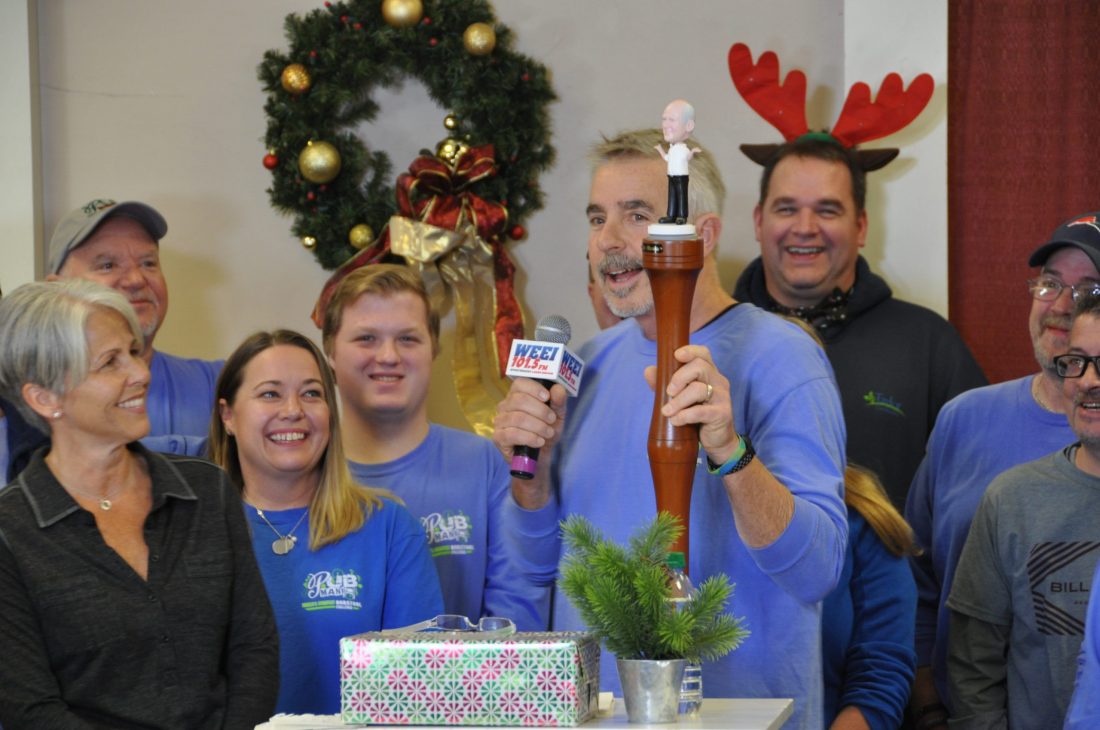 For several years now, I have been writing blogs and press releases to support the fundraising efforts of the Greater Lakes Region Children’s Auction. This nonprofit in New Hampshire, where I also live part-time, raises money to disperse annual grants to organizations that support children and families in need. When writing this blog, I had the pleasure of interviewing my brother, Allan, and sister-in-law, Jennifer; they are amazing philanthropists who work tirelessly for the community.

In the mid-2000s, Allan Beetle found himself on a stationary bicycle in the middle of the night at the Laconia Athletic and Swim Club. He was taking part in a fundraiser the club’s owners, Tom and Lori Oakley, had dreamed up and named Cycle Mania. Teams from the community took turns on the bikes, riding to raise money for the Greater Lakes Region Children’s Auction.

As Allan tends to do, he chatted up his neighbor on the next bike as the two pedaled. Allan was forming a wild idea. “We talked about the possibility of doing the same kind of fundraising event with teams, but instead of sitting on bikes, team members would sit on bar stools,” says Allan, co-owner with his brother Jeffrey of Patrick’s Pub & Eatery in Gilford. “It was like ‘Ha ha. That would be funny.’”

Not too many years later, though, around 2007 or 2008, Allan and his wife, Jennifer, and friends who became co-organizers, dreamed that wacky idea into existence. Pub Mania was launched in 2009 with 27 teams, 27 bar stools, and 24 people per team, each assigned to a bar stool in Patrick’s. For 24 hours, team members manned the stools and enthusiastically raised dollars for the kids. Having retired Cycle Mania, Tom and Lori Oakley headed up a team.

Instantly, Pub Mania became the single largest fundraising support for the Greater Lakes Region Children’s Auction, raising an unprecedented $47,000 that first year, stunning those who took part as well as Auction leaders. “Our goal was $30,000, and we brought in $47,000. It was the largest single donation ever to the Auction,” Allan says. “Nobody had ever walked in there and turned over a check with that kind of money. It was really fun for everyone.”

Going forward, Pub Mania’s organizers and team captains, fondly described as the “heart” of Pub Mania, began the game of “Plus $1,” playing to raise at least one new dollar each new year.

“It just kept growing, and every year, it was a delight to go down to the Auction and unveil a check that was most often beyond anyone’s expectation,” says Allan, who enjoyed calling Pub Mania “the world’s greatest bar stool challenge” as the event grew over the years. “I think there were one or two years where we barely beat our previous goal, but a lot of years, we crushed it.”

Jennifer Beetle says the big numbers evolved as some team members began fundraising and hosting events all year round. “It was inspiring and gave people a lot of social events to attend,” Jennifer says, explaining that new events created by teams to bolster Pub Mania’s annual giving included comedy and music shows, golf and corn hole tournaments, bake sales and handmade items, and everything in between.

In 2019, the 11th, and final year, as fate would have it, Pub Mania played out again in December with 31 teams that raised a whopping $355,453. In total, the bar stool challenge brought over $2.3 million into the Auction’s coffers. That sum is staggering by any measure but is particularly so when compared to the amount Patrick’s staff and customers raised when Jennifer and Allan first got involved in Auction fundraising.

Back then, in the late 1990s, around the time Patrick’s opened, before Cycle or Pub Mania, Allan says Patrick’s held its own loosely organized annual auction, donating about $500 to $1,500 each year. “We went down and presented a check to the Auction and had a lot of fun doing that,” Allan says. “The more we got involved, the more we learned about the various ways that kids were being helped by the money.”

Once Pub Mania was born, there were all kinds of new and different fun to be had. The event featured 12 hours of live music, each hour of the event had a theme—with more raucous offerings taking place in the wee hours—and there were contests, and referees to make sure the rules were followed, and 50-50 raffles. “We mixed up the games over the years to keep it fresh and interesting,” Jennifer says.

Each year, there were opening and closing ceremonies. The event kicked off with pomp and circumstance, featuring Auction founder Warren Bailey telling the story of how the nonprofit got started. Former Laconia Mayor Mike Seymour was dubbed mayor of Pub Mania, and each year, he’d come to opening ceremonies donning a top hat and proclaim Pub Mania Day. Michael Graham, pastor of Gilford Community Church, read a blessing that was sure to make everyone smile.

Songs were also written just to be sung during Pub Mania. Allan and his friend Shawn Bailey, a Pub Mania referee, penned the event’s jingle, and friend and musician Rick Page wrote a more moving theme song, “Santa Can You Hear Me,” which was performed during closing ceremonies.

As the event wrapped up each year, speakers included young people from organizations supported by the Auction, such as the Boys and Girls Club. The stories of how they were helped and their gratitude made for a touching end to an incredibly impactful event.

“It was always for the kids,” Allan says. “Everything we did was to raise more money on behalf of the kids. Everyone who participated did it for the kids, but we always tried to make sure people were having fun at the same time.”