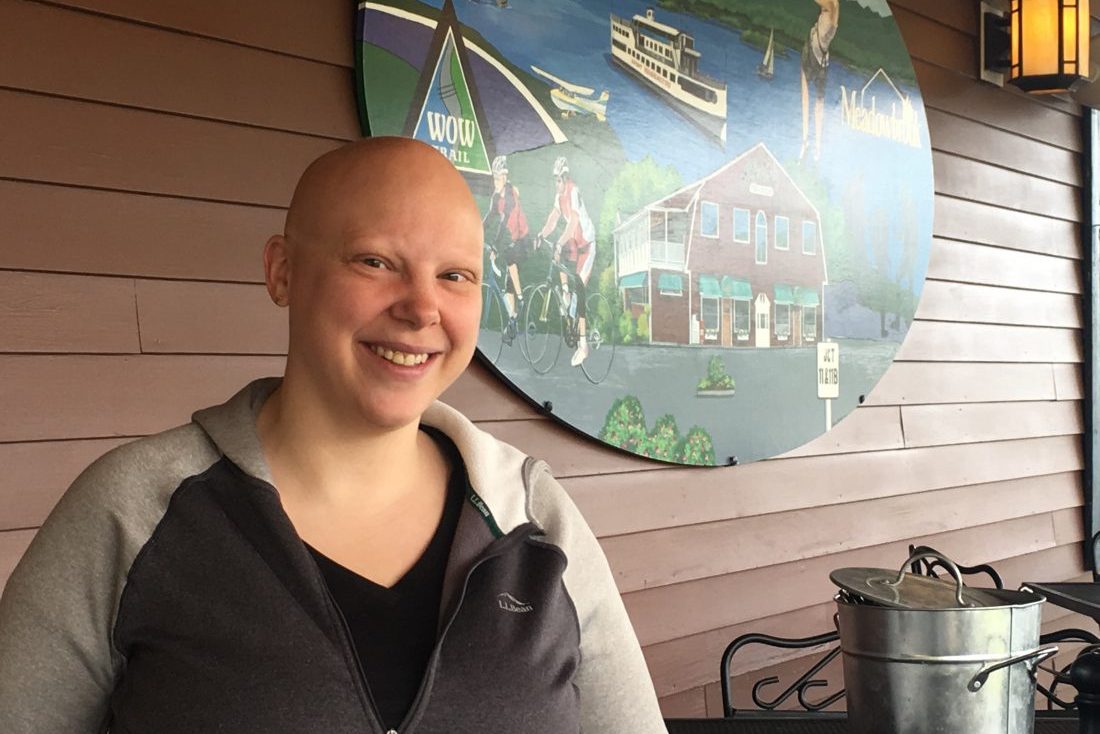 Note: I recently penned this blog for Patrick’s Pub & Eatery in Gilford, New Hampshire. Leah impressed me, and I also admire her. She Dares Greatly. So I am sharing her story with you.

“How come you don’t have any hair?”

“Do you have cancer?”

Leah fields these queries with patience and grace, seeing them as an opportunity to educate people about alopecia totalis, an autoimmune disorder that causes people to lose all the hair on their bodies. Basically, the body attacks the hair, and it falls out.

“The awareness of alopecia is slim,” Leah explains. “When men are bald, people don’t give it a second thought, but when you’re a woman, and you’re bald, it’s completely different. That’s just the way our society is. I want my story to empower people to just be who they are.”

Leah is a 31-year-old Gilford Village resident. She came to Patrick’s in a management role just over a year ago with a background in art education and an extensive resume in the hospitality industry. She’s become an integral part of the Patrick’s family.

“I feel there is a real sense of community here,” she says. “I have a good time with the staff and the owners. And then there’s the regular customers who come in year-round, many of whom have been kind enough to invite me into their homes. Their loyalty is a testament to how Patrick’s is run.”

Though her fellow Patrick’s co-workers and customers have never known her with a full head of hair, Leah had dark brown, shoulder-length locks until she was in her early 20s. She was a senior, studying ceramics at Plymouth State University and was bartending at The Common Man in Ashland when she noticed a bald spot on the back of her head.

After a friend confirmed what Leah could feel with her fingers, Leah called her aunt, who also has alopecia. “I kind of knew what it was,” Leah remembers. “I knew that my aunt was bald and that she even wore a wig during my childhood.”

“Your body is trying to get rid of something it thinks is a threat,” she explains. “It was really driving me insane. It was worse to try to keep the hair I still had, so I eventually shaved what remained.”

In a matter of weeks, Leah’s eyebrows, eyelashes, and the hair on her arms and legs also fell away. This was an indication that Leah has alopecia totalis, the rarest form of the disorder, which involves loss of all hair.

“Losing my hair bothered me a bit, but the harder part was when I lost my eyelashes and eyebrows,” she says. “It changed the way I look. People I know from childhood don’t recognize me now when I run into them.”

Though Leah tried a wig, she didn’t feel like herself. Instead, she embraces her look. And she educates people who find it a curiosity. She does, after all, have a degree in education.

After earning a bachelor’s in ceramics from PSU, Leah obtained a master’s degree in art education, also from PSU, and then spent four years teaching at several different schools in southern New Hampshire. She always held part-time roles in the restaurant industry as well.

“I was always working three or four jobs at a time,” Leah recalls. Eventually, she decided to give up the often-chaotic lifestyle of dual employment and pursue only restaurant work.

“I enjoyed being in the service industry more than teaching because it’s different every day, and it makes you think on your feet all the time,” she says. “I’m constantly problem-solving, so I never get bored.”

The restaurant industry is people-oriented, though, and that leaves Leah open to the questioning. She wishes people wouldn’t leap to the conclusion that she has cancer.

“My situation doesn’t feel that serious,” she explains with a smile. “Some people have a really hard time with the hair loss, and the psychological effects can be damaging. I am lucky that, for me, it’s just hair.”