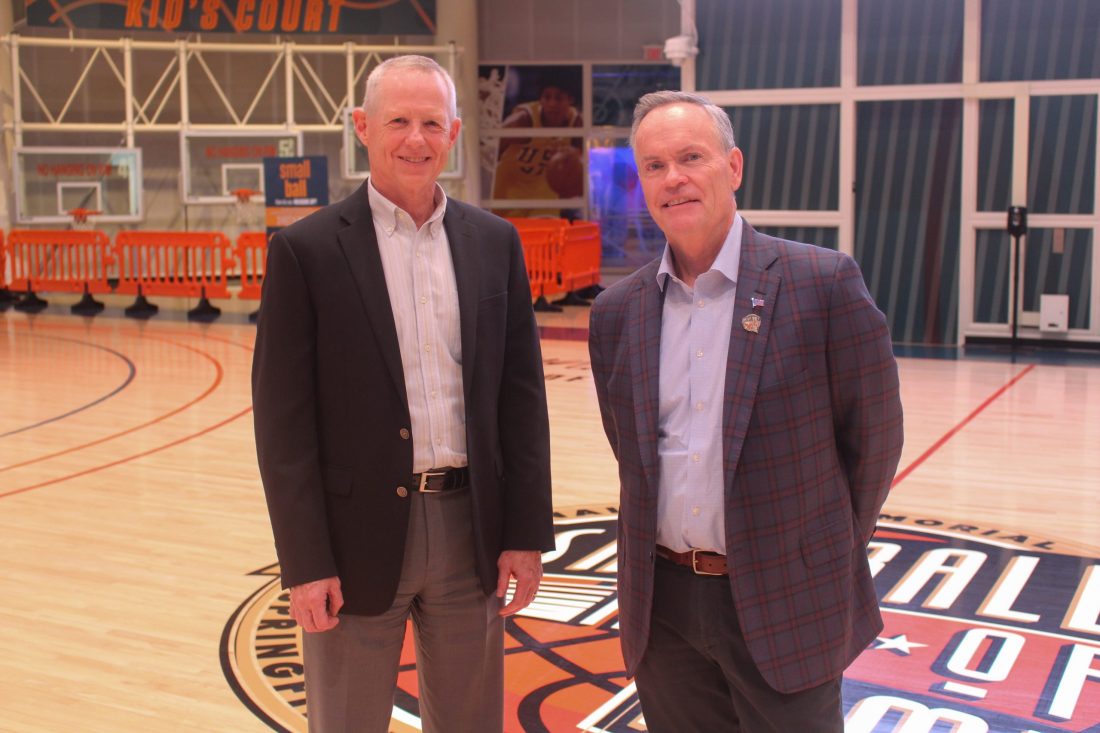 Enhanced Hall of Fame programming to be showcased during April school vacation week; visitors with a Florence Bank debit card to receive 50 percent off cost of admission

FLORENCE—Florence Bank donated $100,000 to the Naismith Memorial Basketball Hall of Fame to support its multi-phase, multi-year renovation, and as programming ramps up for families visiting during April vacation week, new and ongoing 50 percent admission discounts will be one benefit for bank customers.

The savings for those who use their Florence Bank debit card for admittance to the museum is a recent enhancement and will be an ongoing benefit of the long-term partnership the bank has with the Hall of Fame. The discount will be in effect during school vacation week from April 18 to 22.

The collaboration between the bank and museum began roughly a decade ago with a Florence Bank ATM at the Hall of Fame. It has since grown to support programming of all kinds, including a Dribble Parade held by the bank several years ago to celebrate its first branch in Hampden County. Customers and community members dribbled basketballs through the streets of West Springfield in an event that also included Hall of Famer Teresa Edwards.

“We want to do our best to make sure we are taking care of the community. That’s one of the goals that we’ve had in working with Florence Bank, and we’re trying to amplify it,” said John Doleva, president and CEO of the Hall of Fame. He added, “Florence Bank’s partnership with the Hall of Fame has played a crucial role in getting us where we are today.”

Michael Pietrzak, director of partnerships, said the museum renovations began four years ago, and the bank’s gift of $100,000 came in phases over the past five years, with the final $20,000 gift made recently.

“The unique thing about the Basketball Hall of Fame is that it’s a global brand, recognized all across the world, with visitors from China and Australia. Yet, we have strong partners here in the community,” Pietrzak said. “Our relationship with Florence Bank is on top of the list.”

The bank helps make the museum and participation in its events, such as Enshrinement Weekend, more accessible to area residents, and Florence Bank partners with the Hall of Fame on events, such as a high school tournament called the Hoop Hall Classic.

As work to enhance the museum progressed over four years, sections of the museum closed in phases. Pietrzak said a reopening was celebrated in July 2020, but because of the pandemic, visitation was at a minimum for the year. However, since July 2021, attendance to the museum has surpassed pre-pandemic levels each month.

“Whether people love basketball or have little interest, we’ve gotten nothing but positive feedback from guests because of the wide variety of features the museum now offers,” Pietrzak said.

During April school vacation, the museum hopes to offer appearances by celebrities, which could include virtual appearances on a brand new 40-foot LED screen on center court.

“Florence Bank was founded on the principle of neighbors helping neighbors,” said Florence Bank President and CEO Kevin Day. “The Naismith Memorial Basketball Hall of Fame is one of our neighbors and an economic driver in our community. If you haven’t visited since it reopened, I encourage you to stop by—and use your Florence Bank debit card to enjoy the discounted admission.”