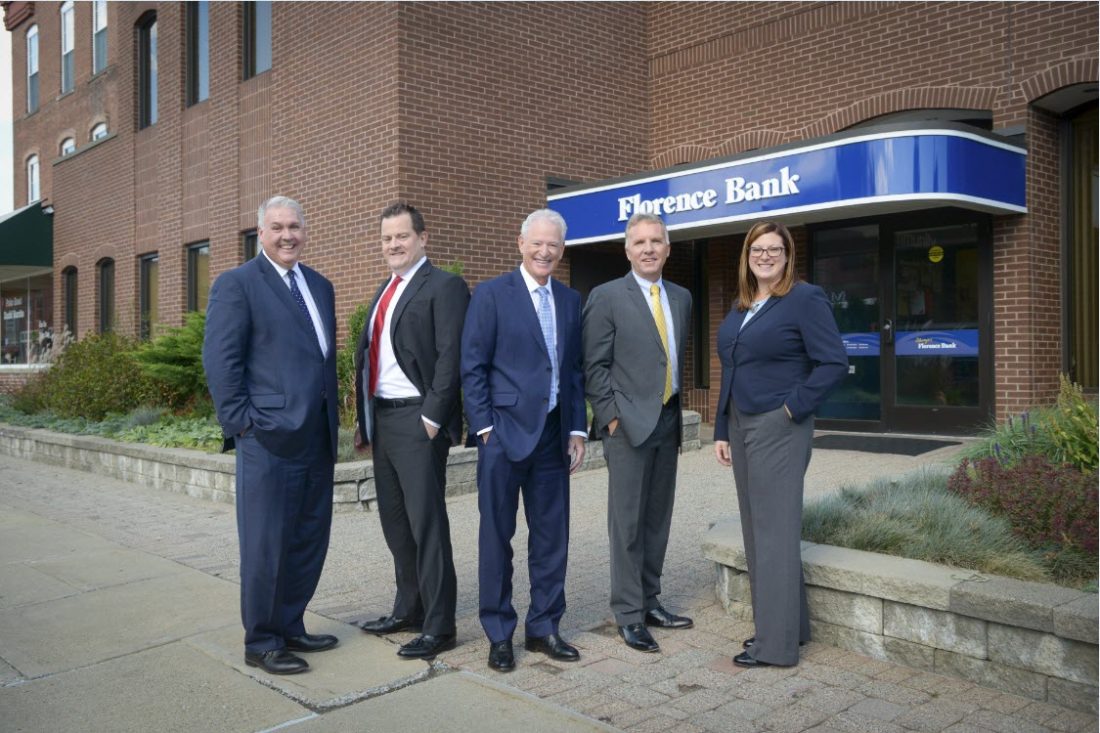 FLORENCE—Florence Bank President and CEO John F. Heaps Jr. announced the bank has hired three well-known and highly-regarded banking professionals with long-term industry experience in the Springfield area. Heaps said they will be charged with helping to grow the bank’s Hampden County presence as it expands in that region.

“We are very excited about bringing in these three professionals who truly are renowned in the region’s commercial lending world,” said Heaps. “The trio will focus on further developing commercial relationships in Hampden County and Northern Connecticut.”

Heaps added, “This is a big move for us and solidifies our strategic direction. Florence Bank is committed to expanding in Hampden County, and we are thrilled to have these banking leaders from the region join our commercial team to shepherd new growth. They will make Florence Bank even stronger.”

The decision to do business in Hampden County began in 2007 with a loan production office in West Springfield. Commercial loan officers James Montemayor, Nancy Mirkin and Hank Downey, along with Celia Alvarado, portfolio manager, have been instrumental in transforming the bank’s total commercial loan portfolio so that it is 44 percent Hampden-County based.

“As a result of our success, and the fact that we see more opportunity in Hampden County, it became clear to us that we needed to expand our Commercial Lending team,” said Michael Lynch, senior loan officer. “We had been looking to add a few new lenders, but we wanted it to be the right fit. Mike, Joe and Candace are exactly who we’ve been looking for.”

Moriarty, Kulig and Pereira will be responsible for developing new business relationships in the Greater Springfield area as well as in Northern Connecticut. Florence Bank will open a branch on Allen Street in Springfield this fall; last year, it opened the Hampden County Banking Center in West Springfield, its first branch in the southern Massachusetts county.

Moriarty said his team is excited about coming on board at Florence Bank.

“It’s a very well-run bank that is aggressively expanding into Hampden County, which is where I live and where I’ve marketed for 25 years,” he said.

Heaps has said that Florence Bank moved into the Springfield region precisely due to the kind of mergers that Farmington Bank has experienced, and Moriarty said the fact that Florence Bank is a mutually held bank with no obligations to shareholders makes it “a big plus for the team and I.”

In addition to this latest acquisition of Farmington Bank by Peoples United, Heaps points to a list of bank mergers and acquisitions that have kept the Hampden County market unstable for customers and bank employees in past years:

“I’ve been through bank consolidations and mergers four times,” Moriarty said. “It causes such disruption for staff and customers alike. The fact that Florence Bank is a mutual bank is a plus for us and for its customers. Florence Bank is a community bank that really wants to emphasize commercial banking in Hampden and Hampshire counties.”

Moriarty has nearly three decades of experience in the western Massachusetts banking industry. He worked at United Bank for nine years as senior vice president and commercial regional executive, holding the title of executive vice president at the time of his departure.

Moriarty is the second vice president and board member for the West Springfield Boys & Girls Club and is vice chair for Pathlight’s Board of Directors. He has served as the treasurer of Human Resources Unlimited in Springfield, now known as Viability, and was a member of the board for the St. Thomas School in West Springfield. He also coaches basketball and baseball in West Springfield.

Moriarty holds a bachelor’s degree from Merrimack College and a master of business administration from Western New England University. He has also graduated from the American Bankers Association’s Stonier Graduate School of Banking.

Kulig also has over 25 years of local banking experience, and he has held the position of relationship manager at both United Bank and TD Bank. He is a member of the board for Revitalize CDC, formerly known as Rebuilding Together Springfield; a board member and the treasurer for the West Springfield Youth Soccer Club; and treasurer of the West Springfield Youth Lacrosse Club. Kulig holds a bachelor’s degree in business administration from the University of Massachusetts, Amherst, and a master of business administration from Western New England University.

Pereira has over 15 years of local banking experience. She has spent the last four years as a commercial portfolio loan officer / assistant vice president for Farmington Bank. Prior to that, she spent nine years at United Bank. She is a member and the treasurer of the board of directors for The Gray House in Springfield and is a member of the board of directors for the East Longmeadow Educational Endowment Fund. She holds a bachelor’s degree in business administration from the University of Massachusetts, Amherst.

“We’re excited to be growing and adding key individuals,” Heaps said. “We’re going to be here in the community for a long time. That’s why it’s so important for us to seek out and hire like-minded employees to continue to provide the type of customer service we’ve become known for.”

Florence Bank is a mutually-owned savings bank chartered in 1873. Currently, the Bank serves the Pioneer Valley through 10 full-service branch locations in Florence, Northampton, Easthampton, Williamsburg, Amherst, Hadley, Belchertown, Granby and West Springfield as well as through 27 ATMs.  Florence Bank offers a wide range of financial services including investment management through FSB Financial Group (FSBFG) to consumers and businesses.  Florence Bank is consistently voted best local bank by the readers of the Valley Advocate and the Daily Hampshire Gazette.