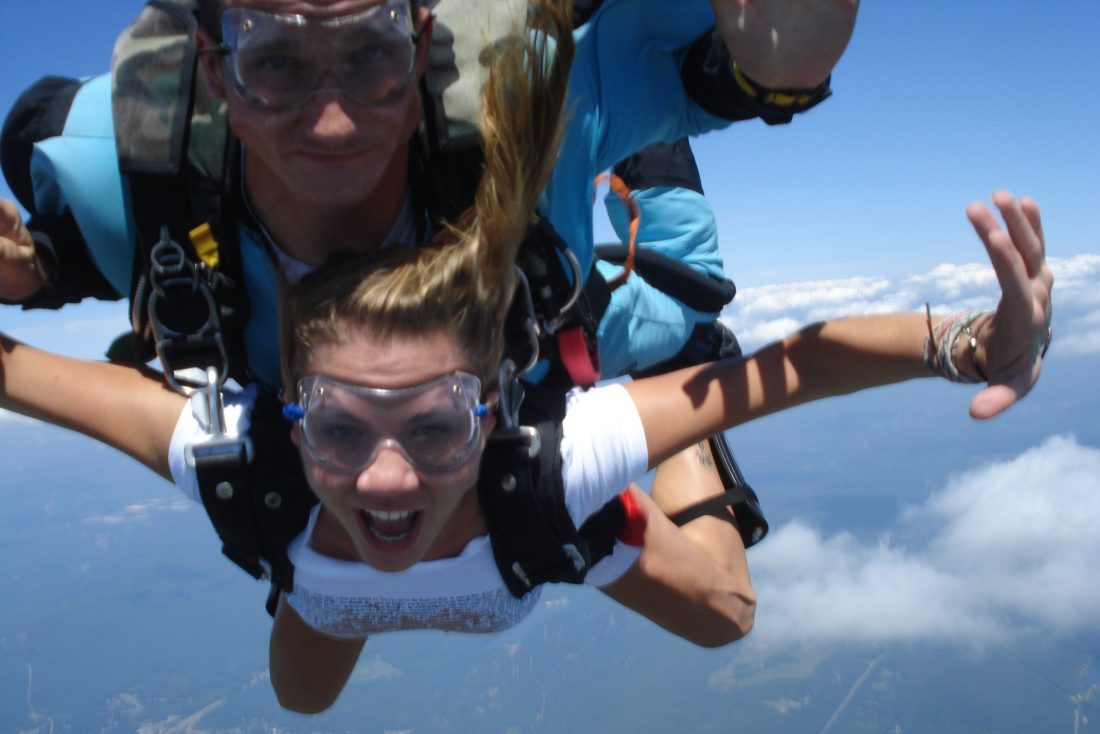 Lately, I love signing in to my online banking account with Florence Bank. As I type in my password on the bank’s Home page, I see the face of my colleague Lauren Zuber on the left-hand side of the screen. She is screaming as she falls from the sky, wearing goggles and a parachute.

I have been partnering with Lauren, the marketing communications manager at the bank, for a year now. We meet monthly to talk about events, news, and other goings-on at the bank. I help raise awareness about them by writing and distributing press releases or penning blogs.

I know Lauren professionally. So, of course it is super fun to see the bank’s video vignette of her—roughly 10 years younger—feeling terrified as she skydives. The clip is one of many currently on view on the Florence Bank website; they are part of the bank’s new “Moments from the Valley” ad campaign, which spotlights poignant snippets in the lives of people who live and work in Western Mass.

Since it rebranded in 2014, after Monica Curhan, senior vice president / marketing director, came on board, Florence Bank has been known as hipper, more innovative. It has inspired Pioneer Valley residents to dance and sing along to its distinctive “Always” song. It all makes me proud that Florence Bank is my bank, and that Lauren and Monica are my clients.

I had little to do with the planning or launch of the ad campaign. That was overseen by staff working collaboratively with Sean Tracey, president of Sean Tracey Associates, and his team; the agency has produced the bank’s award-winning ad campaigns since the re-brand.

The campaign that’s being unveiled now features a television commercial capturing Lauren and: an Easthampton girl playing T-ball, a veteran from the Soldiers’ Home in Holyoke with a dog from Bright Spot Therapy Dogs, a farm owner from Florence, an accomplished flutist from Worthington, a Longmeadow toddler taking his first steps, a Springfield couple getting engaged, a young woman from Hatfield graduating from high school and a Belchertown couple getting married.

Each time I watch it, I laugh. I smile. The scenes with the veterans and the therapy dogs make me misty eyed. The ad, and the billboards that will come as an offshoot, are alive, clever, real and human.

“We’re switching things up a bit and remaining authentic by telling true, local stories,” says Monica.  “We’re proud of the evolution of our brand and look forward to people checking out all the great content we’ve created for the campaign.”

If you want to see the full-length video stories of many of those captured in the tv ad, visit the campaign webpage on the bank’s site at www.florencebank.com/moments. You don’t have to be a customer to check it out.

You’ll even find photos and personal accounts from Florence Bank employees, who share their own treasured moments.

Also this fall, the bank has launched The Valley Beat blog, in which it highlights businesspeople, nonprofits in the region, and banking services.

I was pleased to have the privilege of interviewing Jeff, Nate, and Sam and writing the blogs. Lauren has also written and interviewed many people for posts, including those whose stories are told in the video clips.

Spend some time exploring The Valley Beat blog and watching Florence Bank’s moving ads. All of the innovative content is sure to entertain.