I met Craig Fear in a business networking group, and after we became housemates, we also became great friends. While we no longer even live in the same state, we remain close. Craig was a skilled nutritional therapist when I met him, and he transitioned into food writing and blogging. He now has three cookbook titles to his name, the most recent being New England Soups from the Sea, published by Countryman Press. Craig is meticulous. His recipes are delicious and promote good health. I was pleased to be a taste tester for many of the recipes in the latest book. And while I did not help Craig with his manuscript, I did edit the impressive proposal that got him the agent who connected him with Countryman Press. In this first of two blogs, Craig talks about how he became an author, and he tells us about his new book. In the second blog, he also discusses the differences between self-publishing with Amazon and having a publisher now. (Food photos in this blog are by Lynne Graves.)

What is your background in the food industry?

I started out as a nutritional therapist and consulted with clients with digestive issues for many years. During that time, I created a blog and started writing about digestive health. This morphed into creating recipes, so I was doing both for a while. Then I wrote my first cookbook based on soups for digestive health issues. I started growing my blog audience and slowly transitioned into being a full-time food blogger, food writer, and cookbook author. I stopped meeting with clients several years ago.

What inspired your writing and books?

One of the foods I promoted to my clients was bone broth, which has a lot of medicinal value for the gut and soothes the gut lining. That’s why our grandparents used to give us chicken soup when we were sick; it has a lot of immune-boosting qualities. I was seeing so much benefit when people would consume these broths that I decided to write a cookbook with some of my recipes. That was back in 2015. My first cookbook was called Fearless Broths and Soups. I didn’t think I was going to write another cookbook, but I traveled to Southeast Asia and fell in love with the cuisine. I had the chance to go back to Thailand a second time, and I studied the cuisine and then wrote The Thai Soup Secret. 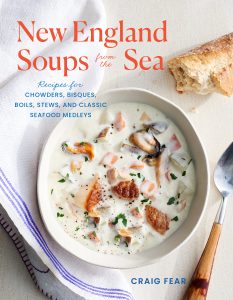 Tell us about your most recent cookbook. What does it offer in terms of recipes?

New England Soups from the Sea includes 80 seafood soup recipes. I decided to write it because, in almost any New England-area restaurant, if they serve seafood soups, 99 percent of them will only offer you New England clam chowder and lobster bisque. Those are delicious. I love them, and everybody loves them, but I knew just from growing up in the Northeast and living in New England and exploring New England cuisine, that there were a lot more worthy recipes. I wanted to bring back these old-school recipes and show people how much you can do with seafood. I’d say half the recipes are maybe old-school chowders and stews, but half are soups and stews I created and had fun with in my kitchen. I teach people how to make different stocks and broths with seafood that can be really creative and have fun.

I researched existing soups, chowders, bisques, and stews and started testing those recipes in my kitchen, putting my own spin on them. I tested them. I also had people test them for me. I even had a few tasting parties where I would have people come over, and I would make anywhere from five to seven different types of soups. I asked for feedback on what they liked, didn’t like. Then eventually, I settled on 80 recipes. What is important to me in addition to the recipes is connecting people with local New England seafood. I want to encourage people to purchase seafood that is local to them. That’s kind of an important message in the book. It’s about soups and supporting seafood that is caught and raised the right way on a small-scale sustainable level. All around the country, we aren’t really buying local as much as we could be and should be. A lot of people are only aware of a handful of different species. Maybe four or five that they’re comfortable with. I wanted to show people that there is a lot more beyond, for example, shrimp, salmon, cod. 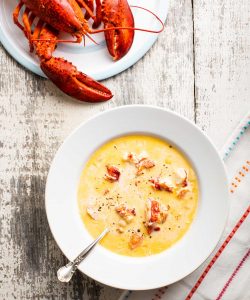 How does your knowledge as a nutritional therapist enhance your books and the information you can offer readers/cooks?

I understand the nutritional difference between doing it yourself and buying store-bought brands. When you make broths yourself, you’re creating a superior product that is nutrient dense and flavorful. I took that knowledge into seafood, which is not as understood. Making fish stock is something I have been doing for years, but very few people do it at all. So I brought my own experience into the seafood realm.