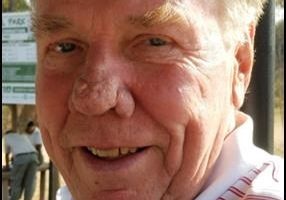 LACONIA—After Paul Daisy retired and moved from New Jersey to Moultonborough, he went looking for volunteer opportunities to fill his time. He got connected to St. Vincent de Paul and later learned that the Greater Lakes Region Children’s Auction helped to support his new, favorite nonprofit.

So, Daisy signed up as an Auction volunteer, too, working at the fundraising event each day from start to close. That was back in 2003, and 17 years later, Daisy is still working all week with Jennifer McGreevy, the first Auction volunteer he met on his first day. And he’s also working alongside Jennifer’s children—and other young people Daisy has watched grow up over the years.

It’s these connections Daisy values most about his work with the nonprofit.

“You meet people who you only see once a year, and yet it seems like you’re reconnecting with an old friend, year after year,” Daisy said. “Just like with Jennifer, I’ve watched her family grow along the way.”

Daisy, now 79, settled in Moultonborough in 2001, having recently retired from running his own business, working as a consultant on business process re-engineering with Fortune 500 companies around the United States. In his business he helped clients transition from paper to electronic exchange of common business transactions.

It seems fitting, then, that Daisy’s early role with the Children’s Auction involved the processing of donations, which has now become more high-tech. Daisy helped donors document their donation, indicating their name, a description of the item, and its estimated worth. Another volunteer inputted the information and sorted the donations by category, with Daisy acting as the go-between. After the items were auctioned off, he would carry them to the pick-up area.

Functionally, it still all works similarly now, but computers, digital photography, and scanners are involved.

Daisy said, from his vantage point, the recent Children’s Auctions now dwarf the efforts of past years in terms of volume of donations and the total amount raised. The annual event now supports 62 nonprofits in the Lakes Region. While it raised $2,100 in its first year, it brought in $600,032 this year, its 38th.

“It is enjoyable because of the people I work alongside,” Daisy said again. “A lot of people put in way more than a week of time to ensure the Auction was well set up and then ran smoothly. It’s an extremely worthwhile event.”

Having moved from a metro area where auctions were broadcast on the radio and on television, often raising millions for a cause wasn’t unusual in Daisy’s former world. But in a more rural environment like New Hampshire, he has always been impressed by the Children’s Auctions’ fundraising.

“I came here, and I found that, comparatively, we actually blew the amount of money being raised in metro areas out of the water,” he said. “It’s mind-boggling, and it’s because people are just so motivated to support our local children.”

At the 2020 Children’s Auction, you’ll likely find Daisy collecting donated items, taking photos of them, and otherwise helping behind the scenes. He’s also convinced some of his friends and loved ones—like close his friend Lisa Cornish, someone he met through St. Vincent de Paul, and his late wife, Gwen—to lend a hand, too.

“Since I started, the Children’s Auction has become more popular. A lot of people are interested in being part of it,” he said. “I’ll continue to volunteer myself for as long as I can. It’s an inspiring effort to raise money for the children who need it most.”