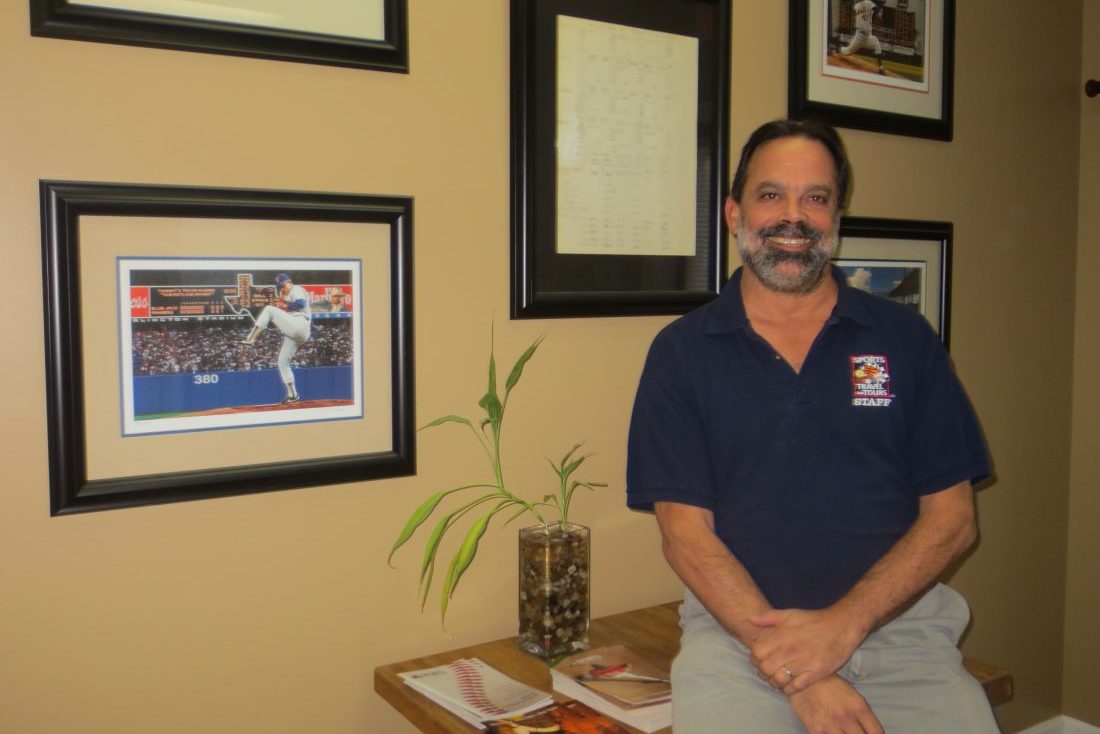 HATFIELD, MASSACHUSETTS—Several years after launching Sports Travel and Tours, Jay Smith took a group of baseball fans to the induction ceremony at the National Baseball Hall of Fame and Museum for the first time. He had 15 travelers. No one at the Hall of Fame knew his name or had familiarity with his Hatfield-based business.

Smith was determined to change that scenario.

Seeing the opportunity to collaborate with the acclaimed organization, he brought his idea to its leadership. “I remember seeing that we were a round peg and a round hole,” Smith said. “A perfect fit. I went to the guy who was then the director of sales, and I said, ‘I’m not leaving this planet until Sports Travel and Tours is the official travel company of the Hall of Fame.”

It took a few years, but Smith finally won the hall’s leaders over. In June 2007, Sports Travel and Tours was named the official licensed travel company for the National Baseball Hall of Fame and Museum.

Since then, when the phone sounds at Sports Travel and Tours and the ring has a particular sound, staff knows the call is coming in from 888-310-HALL, the only dedicated line that the Hall of Fame offers to anyone interested in a baseball travel package.

In today’s online era, there are also multiple links directly from the Hall of Fame site to Sports Travel and Tours’ induction packages.

What the Hall of Fame gets out of the arrangement is vastly increased memberships, Smith said, as well as efficient, organized and convenient access for guests. “You have people who love baseball. We take them to stadiums and make their travel easier,” Smith said.

Last year, Sports Travel and Tours took roughly 1,000 fans to the Hall of Fame; they experienced all the perks the partnership now offers, such as skirting interminably long lines to get in the museum and VIP seating at the induction ceremony for certain programs.

This year, the business is offering 10 different packages, from the most basic Induction Weekend–Base Hit package to nine other selections that offer increasing add-ons to enhance the experience of getting out to see the six 2019 inductees. Mariano Rivera, Major League Baseball’s all-time leader in saves, pitchers Mike Mussina and the late Roy Halladay, and designated hitter / third baseman Edgar Martinez, were all elected by the Baseball Writers, while Lee Smith and Harold Baines were elected via the Today’s Game Committee.

Smith said his staff meets quarterly on the telephone with staff from the Hall of Fame. In a call February, the partnership was renewed for four more years. “I thanked them for continuing the partnership,” he said. “One of their vice presidents said, ‘Jay, you guys outshine every other official licensee that we work with. You’re not even in the same ballpark as anyone else. You rise so far above.”

Sean Gahagan, the vice president of retail merchandising and licensing at the Hall of Fame, said the biggest positive in working with Sports Travel and Tours is the total commitment to excellent customer service.

“Sports Travel and Tours goes above and beyond, paying attention to the smallest details to ensure that our visitors have a great experience on their trip to the National Baseball Hall of Fame and Museum,” Gahagan said. “Every member of the Sports Travel and Tours staff has a passion for what they do. You can tell they really love their work, and it shows in the way they treat their customers.”

For instance, in years past, VIP seating was not offered as part of any package deal. Now, Sports Travel and Tours can choose between packages that include the VIP section seats—near players’ families and team dignitaries—or those in the general seating area.

Sports Travel and Tours arrives at the Hall of Fame a few days in advance to set up 500-800 chairs on the field where the induction takes place. “We are the only company that is permitted to do that,” Smith said. “Everyone else generally sets up behind us.”

Also, all travelers with Sports Travel and Tours receive a lanyard that allows access to an alternate entrance to the museum, which means they can avoid waiting an hour or two in line to buy a ticket.

Our travelers also arrive by bus and get dropped off in front of the museum; individuals must park in a lot several miles away and wait for the shuttle into Cooperstown.

In the first year of the Hall of Fame partnership, Smith said the numbers jumped up near to 1,000 travelers, but that was because two iconic players were inducted that year—Tony Gwynn and Cal Ripken Jr. In the years following, the numbers were closer to 100 to 200. “Now, we are consistently upwards of 700 to 1,000 per year, depending on who the inductees are,” Smith said.

He adds that 700 people are already registered for the induction in 2020, even though the players won’t be announced until next year, and there is no programming yet.

“The partnership has opened doors for us,” Smith said.

He adds that the recognition his team received in February, and fulfilling the organization’s mission, means more to him than the increased sales. “Yes, there is a financial reward, but it’s a fascinating feeling to take travelers to the Hall of Fame and know you were a part of fueling someone’s passion. We’re hitting people in their souls. We bring joy to people.”

Fred White, of Temecula, Calif., and his wife, Kathy, appreciate the convenience of traveling with Sports Travel and Tours and have been on many adventures, including multiple induction ceremonies.

Over the years, the Whites have met sports stars—like former San Diego Padres pitcher Randy Jones and his wife, Marie Stassi, whom they spoke with in Cooperstown about his baseball career and battle with throat cancer—and they’ve also come to know the travel company’s guides.

“The thing that really catches me off guard is the knowledge of the guides,” White said, adding, “The staff make us feel welcome and like a part of the organization. That’s something you don’t find very often.”