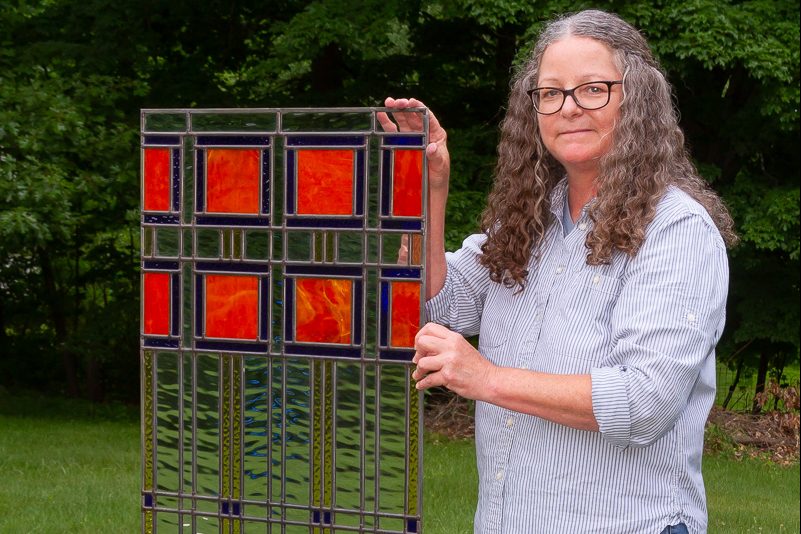 Heather McLean, owner of Dragonfly Stained Glass Studio in Easthampton, was commissioned to design the panels, which are part of an elaborate, two-and-a-half-story window grouping.

Each new arts-and-crafts-style panel created by McLean is identical, measuring 4-feet high by 2-feet wide. They combine bold orange squares with deep blue edging and long, vertical, pale yellow highlights, and all six windows together will fill a space that is roughly 8-feet high by 6-feet wide.

Above McLean’s stained-glass windows, three tiers of windows original to the building—one overarching transom window and two tiers of oblong windows—will be cleaned, painted and reinstalled to further refresh the entire collection.

McLean’s panels replace three original stained-glass windows that could not be restored; they will be cleaned, refurbished and hung in the building at a later date as an art sculpture, said Jon McGee, Thornes facilities manager.

Over the past 10 years, Thornes has taken on a series of major renovations to improve and enhance the eclectic shopping center, including the recreation by a Vermont artist of stained-glass window panels along the Grand Staircase a few years ago.

“We really liked the way it looked. We felt like we were adding to the historic authenticity of the building,” said McGee, noting that when Thornes leaders got ready to refresh the Chestnut Staircase assembly, they preferred to work with a local artist.

Installation of all new window panels is expected to occur in late July and will not disrupt business. Shops will be open and accessible during normal business hours; visitors are encouraged to use the main staircase.

Recent renovations, completed without harm to the historic highlights, have included the remodeling of several bathrooms, which are now fully handicapped accessible; the addition of oak handrails along the walls of the Grand Staircases; and, in partnership with Herrell’s Ice Cream, the replacement of a staircase with a ramp, making the ice cream parlor accessible from within Thornes for the first time in its nearly 40-year history.

The current window replacement project is the third to be undertaken at Thornes. The next phase will involve replacement of all remaining windows on the first floor.

“When we finish up this phase with the stained glass, we will be 60 percent done with window replacement and restoration,” McGee said. “The remaining 40 percent will be completed by some time in 2019.”

One of the main goals, McGee said, is to increase visibility and light within the stores while also increasing energy efficiency. With the same goal in mind, Thornes’ management will focus next on replacing the building’s lighting to make it more cosmetically appealing and brighter.