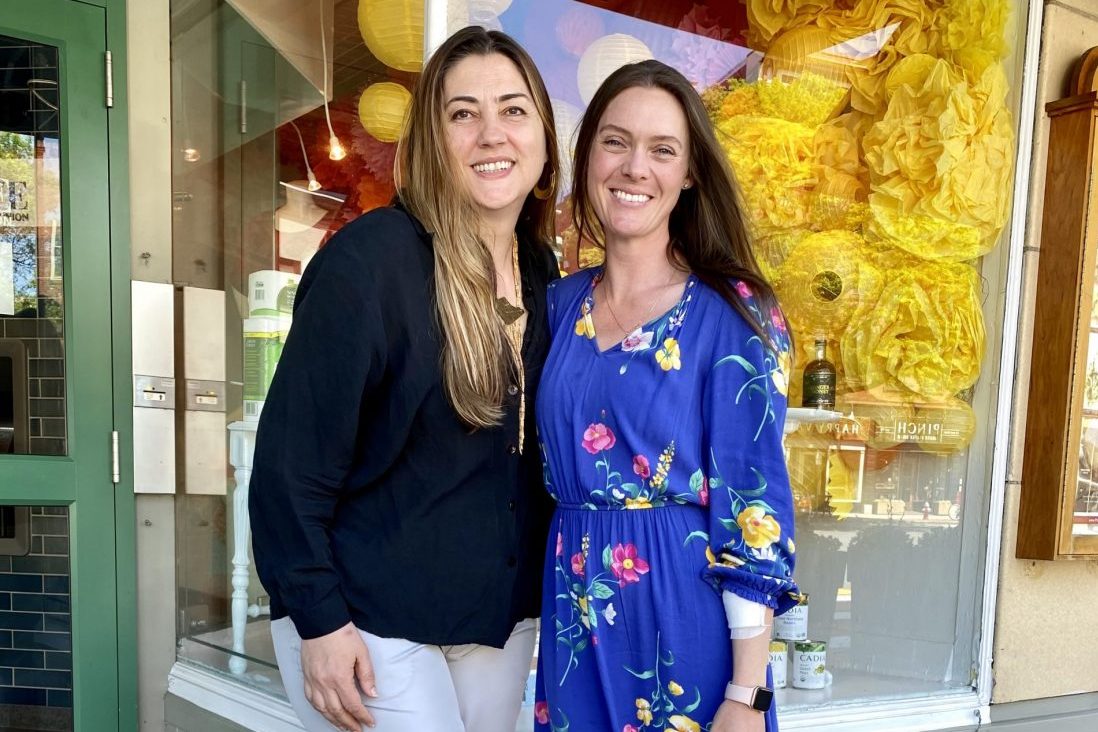 NORTHAMPTON—Two women entrepreneurs with a passion for artistry and design have opened shops in Thornes Marketplace, one offering Bohemian home décor and the other, women’s lingerie and loungewear.

Cigdem “Chi” Turkomer, the owner of Le BonNton, originally located on Old South Street, moved into Thornes last June, relocating several times within the building over the past year and recently settling permanently on the second floor.

In its fifth year, Le BonNton offers linens, furniture, and other décor, which Turkomer also provides for a fee to couples through her wedding design service. On June 10 from 5-8 p.m., Thornes will host a fifth-anniversary celebration for Le BonNton in the shop, with music, local art displays, and Turkish Delight sweets prepared by Turkomer.

Ali Ingellis, owner of Ooh La La, opened her boutique on the first floor of the historic shopping center in downtown Northampton in May. The lingerie and loungewear she designs and produces are inspired by history and nature, and she describes her shop as, “Beautiful, unapologetically feminine, intimate—like your best friend’s closet.”

Both women said they chose Thornes Marketplace for the downtown location, foot traffic, and ambiance, and they are thrilled with the support they have received thus far from management.

“The merchants here are carefully selected,” Turkomer said. “There is a balance. And management is very professional, kind, and warm-hearted. It’s a privilege to be here.”

Ingellis said, “As a first-time shop owner, Thornes has the safety net I needed. I have experienced this in my opening week, receiving so much support and encouragement from everyone in the building. The management team has created a place where businesses thrive. They support, encourage, and work together to help you get started right.”

Turkomer, of Northampton, was born in Istanbul, Turkey, and came to Northampton in 1990 to learn English with a tutor. She studied film production at San Francisco State University and returned to Istanbul, launching a career as a set designer for documentaries and commercial films; she has also worked as an interior designer.

She put her skill, experience, and sensibilities to work for her locally after returning to Northampton in 2016 with her two children, both graduates of Northampton High School.

She opened Le BonNton in 2017, offering everything from clothing made from hand-woven fabrics and other quality textiles to jewelry and home accessories such as rugs, brass candlesticks and lamps, and cotton pillowcases. Educated in a French missionary school in Istanbul for 12 years, Turkomer named the business by combining “Le Bonton,” which means “elegant form or style” in French, with the abbreviation for Northampton, “Nton.”

Drawing on the connections she made with vendors in the film industry, Turkomer buys her inventory from suppliers offering ethically manufactured products as well as from women-owned vendors. Many of her products are custom-made.

“Customers say they feel like they’re traveling to another country,” she said, noting they began to ask if she would rent her products for weddings and other events. This demand prompted Turkomer to diversify, and she began offering wedding design services, complete with décor from linens to brass trays to rugs.

The pandemic soon quashed that rental venture, and Turkomer closed her physical shop 2020, opening a kiosk in Thornes to manage her retail sales and offer elopement wedding services.

“I don’t like big cities and consuming too much in the malls,” she said. “I don’t like plastic or synthetics, so what I have in my store is my lifestyle. I believe in making your own space with your soul—for your mind, body, and health. We need texture and color in our lives. We need things that make us feel special.”

Turkomer has memories of Thornes from her first stay here decades ago. “I love the Middle Eastern-bazaar feel of it,” she said. “I love the connection with my customers. I love that this is communication, friendship, neighborhood. I feel like I’m home.”

Ingellis, of Amherst, was originally from Martha’s Vineyard. She holds a degree in philosophy from Mount Holyoke College. She grew up hearing the stories of familial female role models who were entrepreneurs. Her great-great grandmother ran a guest house on Martha’s Vineyard, and her great grandmother, Dorothy Darling, ran two restaurants in Oak Bluffs into the 1960s.

In her shop in Thornes, the first thing customers see is a photo of Darling as a child, and she has named her first collection of lingerie the Darling Collection in homage to her. Her loungewear is inspired by evenings spent on the beach on the Vineyard; it is called Menemsha Collection after the fishing village with the world-famous sunset.

“I have always loved lingerie and the incredible way it transforms your essence in a very private way. When you wear something beautiful close to your skin, it changes your perspective on your day, and even on yourself,” said Ingellis, who worked for various small businesses in the area—including Paul and Elizabeth’s—after graduating from Mount Holyoke.

She also is an accomplished equestrian and founded the Amherst Equestrian Center, which she still operates.

Ingellis founded Ooh La La in 2020; Thornes is her first location. “The connection to women and those shopping for women fuels my creativity,” she said. “I love hearing what drives someone to choose their garments.”