Blogging to Spotlight a Client’s Customer 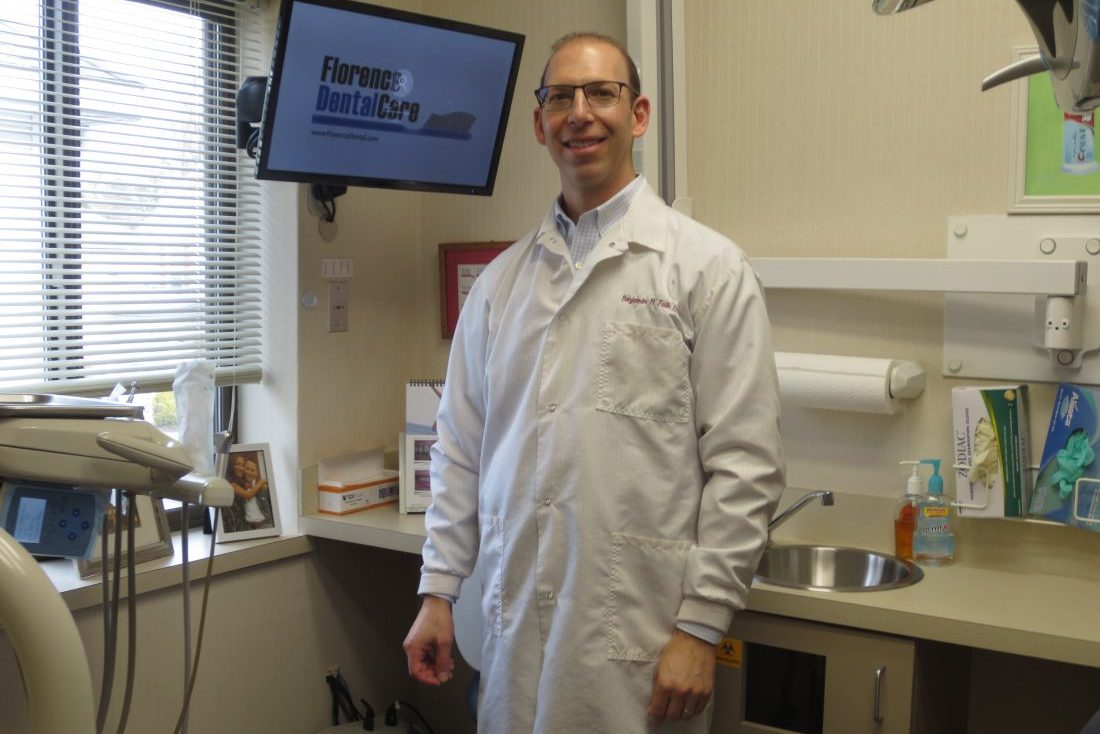 I partner with Florence Bank to tell the stories of its staff, customers, and innovative programs and services. The bank has a blog called From the Ground Up, in which it celebrates its commercial customers. This blog on Florence Dental was an installment in that series.

George Falk founded Florence Dental Care in 1974 in a historic home right on Main Street in Florence. His son, Benjamin, was four years old. Ben’s jobs included vacuuming the carpets and sweeping the parking lot in front of the building.

At the age of seven, Ben watched a bulldozer knock the structure down with one steely bite to make way for the two-story building that houses the practice presently. Florence Dental Care was a second home for Ben, and, now, it’s the place where he continues to grow as a practitioner and a leader.

Ben joined the dental practice at Florence Dental Care in 1999, after earning a bachelor’s degree in government from Cornell University, and then completing his degree of doctor of dental studies from New York University’s College of Dentistry. He also successfully completed a fellowship in periodontology from the University of Connecticut School of Dental Medicine.

While Ben considered the medical profession, there was always an inherent call toward dentistry.

Ben’s grandfather Hyman Falk was a dentist before his father George. Hyman graduated from New York University in 1928 and his father 35 years later. Ben’s grandmother, Ida Falk, walked with Ben to collect his own diploma in May 1998.

“I knew it was in my genes, in my heart, in my hands, and in my head,” Ben says of his move into the practice. “It was just a matter of going through the laundry list of, ‘Is this the right profession for me?’”

When he came on at the practice, Ben became known to patients as “Dr. Ben” to differentiate him from his father, the other Dr. Falk.

George Falk has stepped down from working with patients but continues to have a hand in managing the practice. Ben serves as president and works alongside dentists Patrick Lang, Mark Stevens, Theresa Hoang, Mark Haselkorn, and Andrew Jason Adams.

Ben’s arrival in the practice gave the group the opportunity to diversify.

Ben spent two years completing a fellowship in periodontology—a specialty in gum care—and now patients don’t have to be referred elsewhere for that treatment.

The practice’s expansion continued with the purchase of two pieces of state-of-the-art equipment that allows Florence Dental staff to create crowns for patients on site and also map out surgical dental implants; about 80 percent of oral surgical procedures are offered at the practice as well. “That’s been a real game-changer,” Ben says. “That’s the broader theme of where we see general dentistry going—all under one roof.”

Florence Dental has found a way to embrace today’s technological advances while also sustaining a personal approach to customer service. A staff member always answers the telephone and makes reminder calls before appointments. They also call patients after surgery to check in on them, and when a staff member spots a patient in the pages of the local newspaper—in a high school sports story, for instance—they send a note.

“In a day and age where we’ve shifted so much to automation, we maintain personal contact with our patients,” Ben says. “We want to maintain that connection.”

Ben recommends that people starting off in business make an effort to network with community partners and get involved with various, industry-appropriate networking organizations. Florence Dental is a member of the Valley District Dental Society, for instance, and its staff members volunteer in many local events, such as the Rag Shag Parade. “We gave out toothbrushes,” Ben says, adding, “Florence is a very vibrant community. We’ve tried to lean into it a little more and be more actively involved.”

Florence Bank has also been a partner to Florence Dental since its beginning. A bank construction loan financed the new building in the 1970s, and most recently, Florence Bank loans allowed the purchase of the two major pieces of technology.

Ben lives in Longmeadow and has two children, a daughter Aleza, 17, and son Avi, 15.

While Avi is not interested in family dentistry, Aleza has expressed an interest in orthodontics. She could be the person who further diversifies the practice in the coming decade.

Proud of this possibility, Ben points to an oil painting on the wall of a tube of Crest toothpaste. “Aleza made it,” he says. “I have it on permanent loan from her.”

Contact me for help in brainstorming what stories you could tell about your staff, customers, programs, and services.