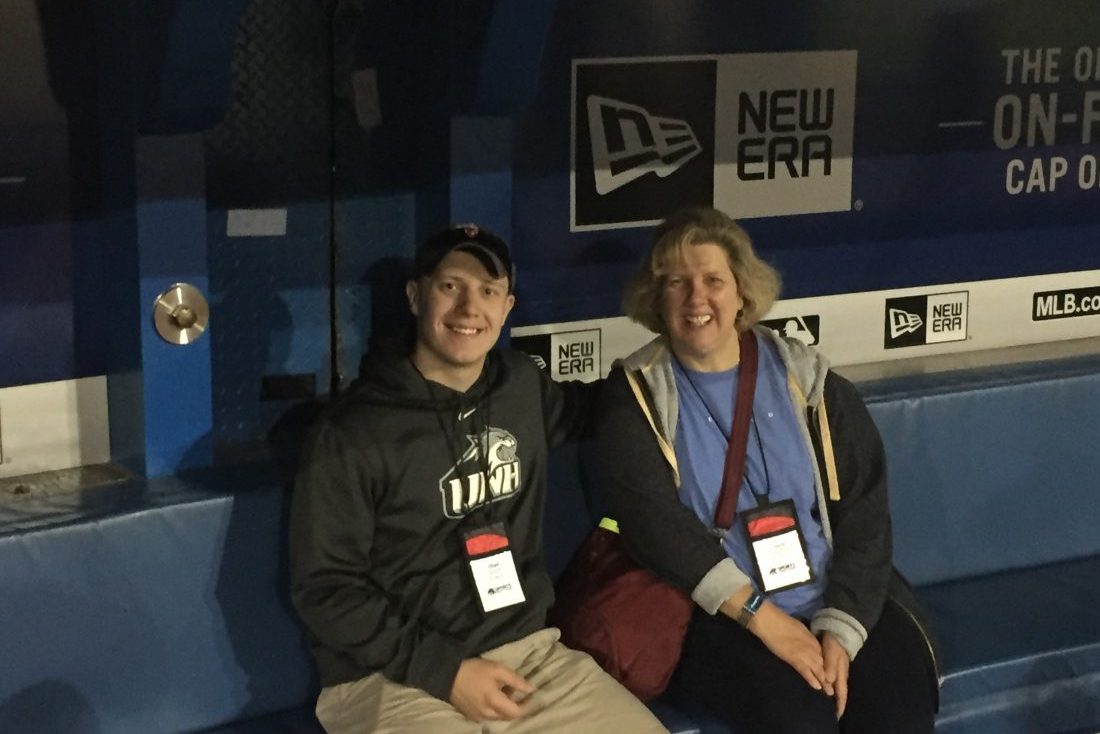 HATFIELD, MASS—Chad Supranowicz was a third grader in 2007, when his mother, Stacie Weldon, gave him a map of the country for Christmas. Rather than highlighting state capitals, it featured the 30 major league baseball stadiums in the United States. The gift came with pushpins in three colors, so Supranowicz could mark parks he and his mother had visited, parks they wanted to visit, and parks they wanted to go to next.

Weldon’s gift for her son, now a 20-year-old finance major at the University of New Hampshire, marked the start of a quest to see all of the stadiums. So far, they had been on three trips with Sports Travel and Tours, a sports travel agency from Hatfield, Massachusetts, which have taken them to 13 stadiums. In their own travels, they visited roughly a half dozen.

“I’ve heard Chad say to other people on these trips, ‘My mom and I are seeing the United States, and we get to visit all these great places,’” said Weldon, 49. “It’s more nerve wracking when we travel alone, but with Sports Travel and Tours, we get a feeling of community. We’re all there for the same reason—a love of baseball—and we always have a good time.”

For Weldon, baseball was something of a family tradition. Her father was a New York Yankees fan, as was his own father. “When my grandparents would take care of me, we’d listen to the Yankees on a little radio,” Weldon recalled. She grew up in the Berkshires where Yankees fans were few and far between, but where New York was just around the corner.

Supranowicz was a Boston Red Sox fan like his father. Weldon had enjoyed teaching him about the sport and its all-stars, like Derek Jeter, David Ortiz, Cal Ripken, and Bucky Dent, regardless of the team affiliation.

“I taught him the love of the game, and he also played from the time he was 4 until he graduated from high school,” Weldon said. “It was something I could share with a son, something I could have in common with him, like I had with my father and grandfather.”

Weldon and Supranowicz took their first trip with Sports Travel and Tours in 2008, the year after Chad received his map of the stadiums for Christmas. They started with a Chicago trip, and have since gone on an adventure that started in Toronto and wove its way back to the United States, visiting several ballparks at once. This spring, the Massachusetts residents went on the Southerner, visiting Marlins Park, Tropicana Field, and SunTrust Park in Miami, Tampa, and Atlanta, respectively.

As a junior in college, taking Sports Travel and Tours trips gave Supranowicz a chance to explore where he might like to settle after graduation. “He loved Toronto, for instance,” Weldon said, noting Supranowicz now looks at all their destinations with an eye toward what it would be like to live there. “We’re exploring.”

Meanwhile, Weldon and Supranowicz got to root for the Red Sox and Yankees, and chatted about the umpire calls and other details of the thrilling games they see along with their fellow travelers, making lifelong friends in the process.

“We met three older gentlemen who take trips together, one of whom lives in Chad’s college town,” Weldon said. “It’s like it was meant to be. We share photos and talk to the three of them and their wives by phone.”

In fact, when visiting Tampa, Weldon, and Supranowicz asked Sports Travel and Tours’ Project Sales Coordinator Anthony Incampo if the three men—who live only an hour away—could get tickets and watch the game with them. Anthony helped make that outing happen.

“We all went out to dinner together, too,” Weldon said. “It’s almost like they’ve adopted my son and we have this great new extended family.”