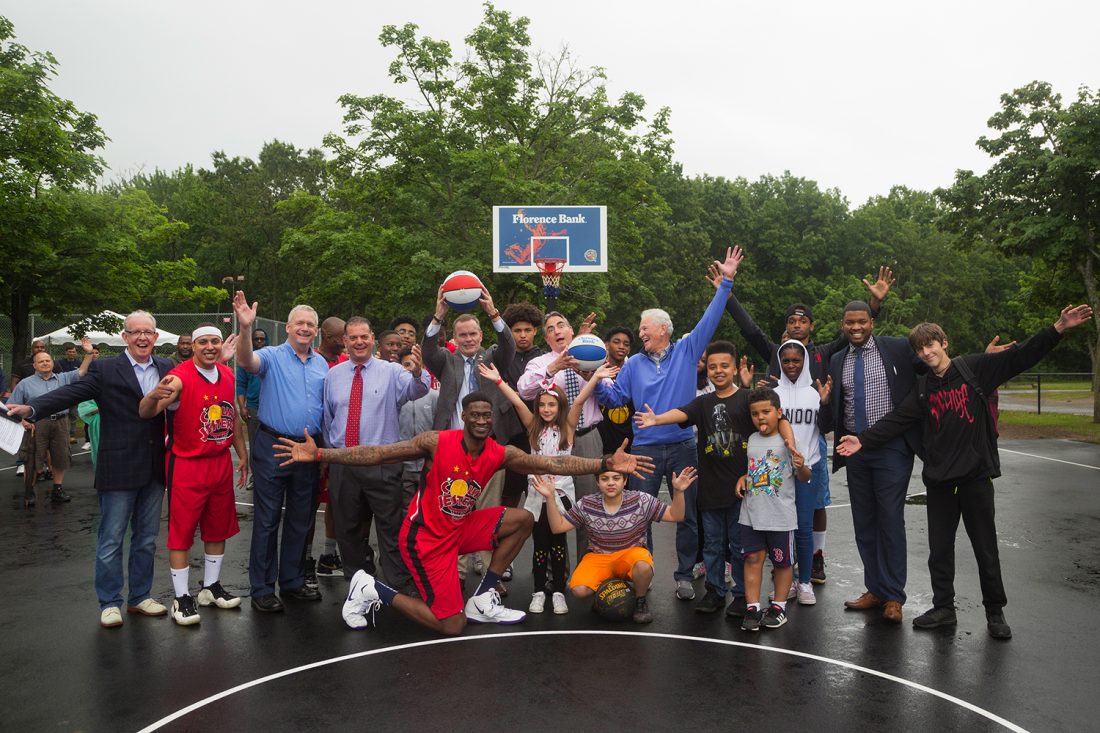 Event at Greenleaf Community Center Basketball Court was a collaboration by Florence Bank, the city of Springfield, and the Naismith Memorial Basketball Hall of Fame

SPRINGFIELD—A basketball event that celebrated the restoration of the court at the Greenleaf Community Center—just in time for summer pick-up games—netted $7,500 in donations for five area nonprofits.

Roughly 50 area residents attended the festivities, which included a demonstration by a comedic basketball troupe called the Court Jesters. Several dozen adults and children took part in the Helping Hoops Challenge. As part of this game that benefitted nonprofits, participants took shots at the basket from three designated points on the court—one that was “kid-friendly” for younger children.

The plan was to give each nonprofit $100 or $25 per basket, depending on the distance from the hoop. But Florence Bank and the Naismith Memorial Basketball Hall of Fame were feeling generous during the athletic and festive event.

John F. Heaps Jr., president and CEO of Florence Bank, ended the celebration by announcing that each nonprofit would receive $1,000 each from the bank. Additionally, Jason Fiddler, vice president of sales, marketing and partnerships for the Hall of Fame, offered $500 per nonprofit from his organization.

The event was a celebration of the rejuvenation of the basketball court at Greenleaf Community Center, which is only a few miles from Florence Bank’s new Allen Street branch.

The city of Springfield and Florence Bank each contributed $15,000 to repave and paint the court at the center for young people in the neighborhood. Two new hoops and backboards were also installed.

The event was to celebrate the opening of the new court and was a collaboration between the bank, the city of Springfield, and the Hall of Fame. Longtime media personality Scott Coen served as emcee and Brian Fowler of New England Disc Jockey provided music.

The celebration began under a tent beside the court—where new backboards display the Florence Bank logo.

“When we open a new branch, we like to show people what kind of neighbors we’re going to be,” said Monica Curhan, senior vice president/marketing director, kicking the event off. “We hope you leave thinking we are fun neighbors!”

Heaps grew up near the Allen Street branch and said, “This is my neighborhood.” He also praised the city and the Hall of Fame for partnering with the bank in the celebration, and he offered kudos to Springfield Mayor Domenic Sarno as, “a true leader who wants to make things happen here.”

Sarno told the young people in the audience—all eager to begin shooting hoops—“Excel on and off the court. Do well on the court and on the tests, and with that combination, you can’t lose.”

He added, “You’ll represent the good in the city of Springfield.”

Heaps and Sarno made the transition from presentation to play with a jump ball in the center of the newly painted court. A player from the Court Jesters made the toss.

Nearly two years ago, Florence Bank opened its first branch in Hampden County at 1010 Union St. in West Springfield, and in December 2018 a second branch opened at 1444 Allen St. “It’s important that we show the community we care about the things that are important to them,” Heaps said, adding, “We like to be good neighbors.”