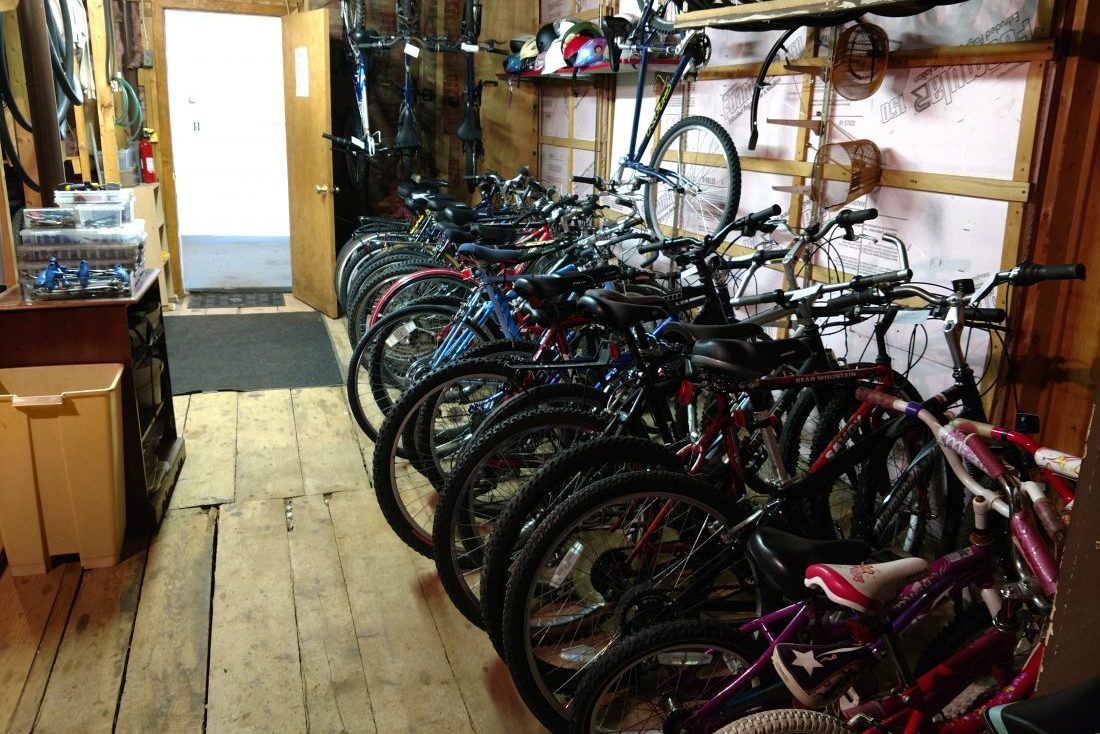 LACONIA—John Rogers, the founder and executive director of the Laconia Area Bicycle Exchange, is stepping down from his post and seeking a new leader to run the organization that provides affordable bicycles to area residents.

Since officially founding the Laconia Area Bicycle Exchange, with the help of Better Together in December 2013, the exchange opened on April 15, 2014. Rogers and his crew of volunteers have supplied 750 bikes to those who benefit from bicycle transportation—for work, errands, and exercise. The exchange has a close association with the WOW Trail as it provides safe and healthy riding options for clients.

“We’re a benefit to the community,” said Rogers. “We saw the opportunity to bring the service of alternative transportation to Laconia, something that wasn’t there before. This has benefitted 120 bike recipients per year.”

He added, “A nonprofit like this accomplishes so many goals—encouraging environmentally friendly transportation, the concept of reduce-reuse-recycle and even healthy living, while most importantly, providing an essential service to those who need it most.”

Laconia Area Bicycle Exchange partners with City Welfare, Genesis, and other human service agencies. “This adds to the importance of the work we do in the community,” Rogers said.

Rogers said candidates for the volunteer executive director position need management, marketing, and fund-raising skills as well as flexibility to operate the nonprofit between April 15 and Oct. 15; currently the exchange is open Tuesdays from 4 to 5:30 p.m. and Thursdays and Saturdays from 11 a.m. to 1 p.m. The shop is conveniently located on 97 New Salem St. Time in the shop averages about six to eight hours per week.

Experience repairing bicycles is a plus but not a requirement, nor is bookkeeping or administrative experience, Rogers said. The bicycle exchange relies on its volunteers to maintain bicycles and receives the latter services, and its 501c3 status, as an affiliate of the Bike-Walk Alliance of New Hampshire.

“The ideal person would have social skills working with the community and know how to partner well with others,” Rogers said.

Allan Beetle, president of the WOW Trail, is grateful to Rogers for founding and operating the bike exchange and hopes it’s possible that a replacement executive director can be found.

“Now with four and a half miles for trail users to enjoy, there are many more bicycle riders using the trail and not just for recreation, but also for commuting to work or running errands,” Beetle said. “The Bicycle Exchange has helped many people get set up with a good, working bicycle.”

The new executive director for the bike exchange will lead a team of four great volunteers, some of whom have been with the nonprofit since its start—Mark Townsend, Steve Cobb, Joe Bush, and Cliff King.

Rogers got the idea to create a nonprofit after taking part in the Landmark Forum, an international organization designed to inspire permanent quality-of-life change in communities around the globe.

In the program Rogers took part in, he was challenged to take an action that would better his community. He was working in the social services sector at that time and had begun collecting used bicycles at transfer stations; he repaired them and gave them to clients he served who were living with mental illness.

He decided to put a structure around his philanthropy, developing a nonprofit that would solicit bicycle donations and then provide bicycles at low cost to those who could not otherwise afford one.

Rogers’ organization got real traction when he was granted a $5,000 start-up award from the New Hampshire Charitable Foundation in 2014. He opened the exchange’s first location on Messer Street. Since then, the nonprofit has moved to Court Street and then to its current location on New Salem Street.

Bicycles come to the exchange now through individual donors, collection at transfer stations, and from the Gilford Police Department. In the organization’s early years, the bicycles were free to those who requested one; now, there is a fee that ranges from $10 to $50, depending on the style of the bike and its age and condition.

“It’s really a wonderful thing to see how much we operate by the generosity of people in the community,” Rogers said. “Bikes are donated to us by individuals, police stations who have unclaimed bikes, and transfer stations that know to hang onto the bikes for us.”

Rogers grew up in Gilford and has long had an activist spirit. He has operated his family’s organic farm in Gilford and an organic apple orchard and cider mill in Northumberland that also generated hydroelectricity. He believes in protecting the Earth, conserving open spaces, and giving back to his community.

Before he sold his family’s dairy farm a year and a half ago, for instance, Rogers put a conservation easement on the property so that it’s protected from development. “I’m very conservation-minded,” he said, noting he is involved with the Society for the Protection of New Hampshire Forests. “I want to do my part to protect the environment.”

Rogers was also a volunteer with the Friends Program, the New Hampshire Charitable Foundation, and Waypoint, and he is also a financial donor for various area organizations.

The Laconia Area Bicycle Exchange currently has about 20 bikes ready to go out the door, with about 75 to 90 in its total inventory.