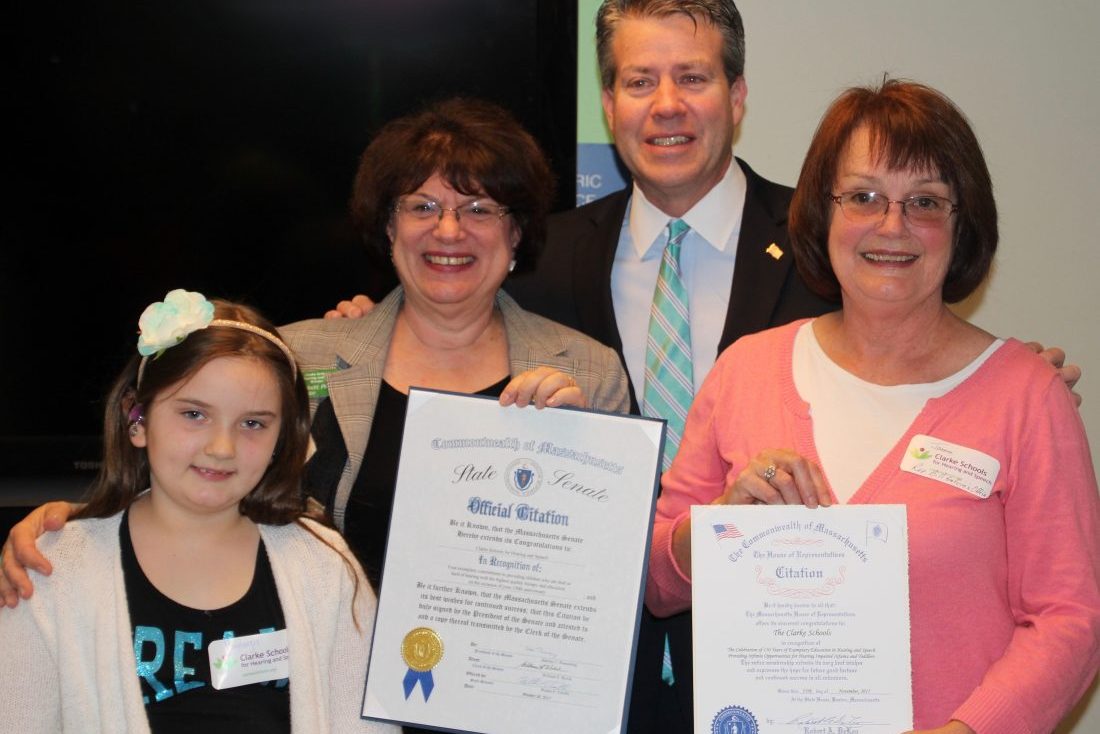 Event held in recognition of Clarke’s 150th Anniversary in 2017

CANTON—State legislators, Boston University graduate students and local business representatives were among visitors from around the Greater Boston area to attend an open house at Clarke Schools for Hearing and Speech on Nov. 15. They had the chance to tour the Boston-area campus, which is celebrating Clarke’s 150th anniversary this year, and to observe firsthand how Clarke teaches children who are deaf or hard of hearing to listen and talk.

Clarke’s visitors gathered on the campus at 1 Whitman Road for the event, held in recognition of the anniversary. In addition to receiving accolades about Clarke from State Senator Walter F. Timilty, Legislative Aide Hans Nagrath, and Joanne Tierney from the office of State Representative William C. Galvin, those in attendance also heard from a parent and child who received Clarke’s services.

Andrea Verlicco, of Braintree, said her 8-year-old daughter Kayleigh, received Clarke’s listening and spoken language services, beginning in a parent infant program when Kayleigh was 3 months old. When Kayleigh was 3 years old, she enrolled in Clarke’s preschool for deaf or hard of hearing children, which provided her with the skills and confidence necessary to successfully integrate into her neighborhood elementary school. Now a third grade student, Kayleigh is able to converse naturally with her hearing peers and to read above grade level. Most importantly, “She’s a happy, typical 8-year-old kid,” said Verlicco.

“We were delighted to welcome state representatives, community leaders and a new generation of educators to Clarke so that they could meet our young students and see firsthand how Clarke changes the lives of children who are deaf or hard of hearing and their families,” said Barbara Hecht, director of Clarke Boston. “We are proud of our students and our accomplished young alumni like Kayleigh, whose story helped our visitors to understand our work and the transformations we can accomplish.”

Timilty, whose state senate district includes Canton, has been a long-time supporter of schools and programs that provide opportunity to children who are deaf, hard of hearing or who experience other developmental challenges. “Senator Timilty has been such a great proponent of schools like Clarke and programs such as Best Buddies that provide children with new ways of learning and accomplishing things they never thought possible,” said Jennifer Whelen, development associate for Clarke Boston. “He really gets it.”

Timilty brought with him to the open house a citation issued by the Massachusetts State Senate, offering Clarke congratulations on its anniversary; he invited Kayleigh to help him read it.

“The Massachusetts State Senate extends its congratulations to Clarke Schools for Hearing and Speech in recognition of its exemplary commitment to providing children who are deaf or hard of hearing with the highest quality therapy and education on the occasion of its 150th anniversary,” said the citation, signed by Timilty, Senate President Stanley C. Rosenberg and Senate Clerk William Welch.

Tierney delivered a citation from the Massachusetts House of Representatives in honor of Clarke’s 150th anniversary, reading and presenting it to Hecht.

Also among the guests were a group of graduate students from Boston University who are training to become teachers of deaf and hard of hearing students.

Clarke’s Boston campus opened 22 years ago, in 1995, and has been located in Canton since 1999. The campus includes four classrooms, therapy rooms, observation booths, a parents’ room, lunchroom, offices and an outdoor playground. Classrooms use sound field amplification systems and are designed to meet the unique acoustic needs of children with hearing loss.

Clarke Boston serves children from birth to age 3 for early intervention, from ages 3-8 in an on-site school program, and from preschool through high school in mainstream services provided to students in schools throughout eastern Massachusetts and beyond by Clarke’s itinerant teachers of the deaf. “We offer unique expertise and a learning environment designed to maximize each deaf or hard of hearing child’s development, while building their self-confidence and preparing them for success beyond Clarke,” said Hecht. “We partner with parents to provide the skills, knowledge and support they need to help their children reach their full potential.”

Children and families who receive services from Clarke Boston are from eastern and central Massachusetts, Cape Cod, Rhode Island, and New Hampshire.

For more information on the anniversary events, or to donate to Clarke Schools for Hearing and Speech in its anniversary year, contact Lillian Rountree, chief development officer, at lrountree@clarkeschools.org or 973-453-5635.

Learn more about Clarke at www.clarkeschools.org.