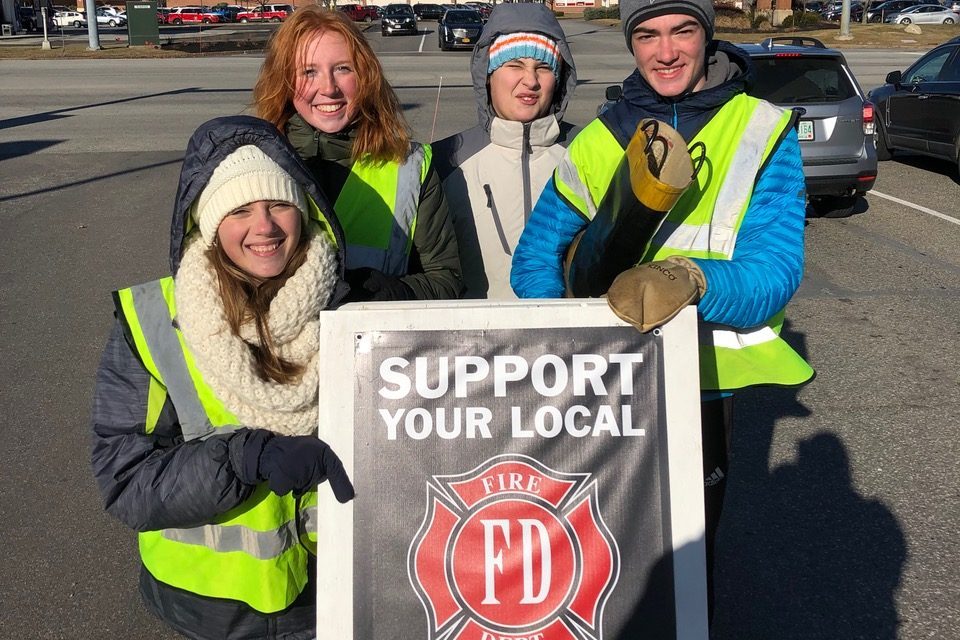 LACONIA— The roughly 30 members of the Gilford Fire-Rescue team have diverse skills. In 2019 alone, the crew responded to about 1,700 calls for help and rescued people who were experiencing a medical event or were lost in the woods on a mountain, in a fire in their home or car, or injured while hunting or boating.

One overarching mission gives the Gilford Fire-Rescue staff members purpose: a desire to be there for the community—on duty and off. So, when Gilford Fire-Rescue and the Greater Lakes Region Children’s Auction first joined forces in the Auction’s infancy, it seemed like a natural fit.

“It’s our mission to support our community,” said paramedic Rae Mello-Andrews, who works on-call for Gilford Fire-Rescue alongside her husband, Captain Rick Andrews. “We don’t get into this profession for the money. We’re here to help people. We see all walks of life firsthand, and we know just how hard hit some families are. Raising money to support the Children’s Auction is just a part of what we do and another extension of helping people.”

Mello-Andrews got involved with the Auction in the late 1980s to honor a friend and colleague, the late Karen Warfield, who was a secretary at the fire station and was like family to Mello-Andrews; Warfield passed away following a long illness and complications from surgery. Gilford Fire-Rescue’s staff members made a $250 donation to the Children’s Auction in Warfield’s name.

“We did it for a couple of years after that, and eventually the Children’s Auction organizers asked us if we might want to do a boot drive,” Mello-Andrews said, noting the effort has grown over the years. “We followed through, originally by having people collect donations outside Walmart, then at Hannaford Supermarket, Shaw’s, and Lowe’s.”

Last year, Gilford Fire-Rescue raised nearly $6,000 for the Auction. The dozen or so staff members who participate in the boot drive on the Saturday following Thanksgiving, including Gilford Fire-Rescue Chief Steve Carrier, get into the holiday spirit by playing Christmas music, and they don’t let bad weather stop them.

“We’re out there in all kinds of conditions. Some years we froze, other years it’s been beautiful,” Mello-Andrews said. “It’s a big team effort. It’s everybody.”

Community members have certainly taken note of those team members who brave the elements to support the Children’s Auction. Just last year, Mello-Andrews said a former colleague who is a nurse, was inspired to bring her teenage son to participate in the boot drive.

“She said it was a really good experience for him to see another side of what the Gilford Fire-Rescue team does,” she added. “It left a positive impression on him. Nothing would make us happier than if we are influencing young people in the community to do good, too.”

Though the team’s community service draws praise, supporting the Children’s Auction seems almost as natural as breathing to the Gilford Fire-Rescue staff members.

“We always see people when they’re not having their best day,” Mello-Andrews said. “We like helping people, and raising money for the Children’s Auction is another way to do that. It’s nothing for many of us to give up a family dinner or activity or an afternoon or day off to assist somebody who needs help. It’s just what we do.”

“The boot drives are a chance for the fire department to share our passion of caring for the community. We get to engage with our neighbors in a really positive way,” said Dom DeCarli, an Auction board member and a lieutenant with the Gilford Fire Department. “Seeing all of the local fire departments jump at the opportunity is not surprising, but it is still impressive. Much like the Auction itself, it’s been inspiring to see what a few people who want to give back can accomplish!”