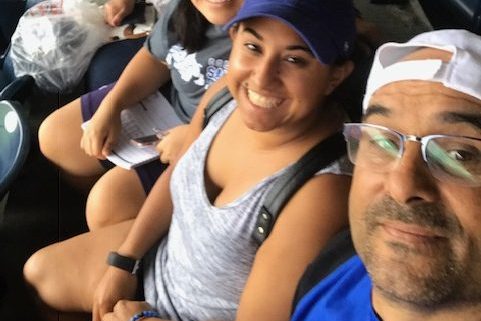 HATFIELD, MASS—For about 10 years, a brochure highlighting Sports Travel and Tours’ baseball-themed travel packages kept showing up on Manual “Manny” Cotla’s doorstep in South San Francisco, California. Colta would simply tuck the brochure aside, too busy caring for his two daughters to think seriously about a baseball getaway.

In 2018, Colta, now 58, realized his travel dreams with Sports Travel and Tours, a sports travel agency based out of Hatfield, Massachusetts. With his 21- and 25-year-old daughters both in college, Colta booked himself the Four Bagger package, bringing his oldest daughter, Amanda, and three of his friends along.

“Amanda and I had been talking about going to Cooperstown, New York, and I told her about the brochure and the Four Bagger,” he said. “For years, I’d been looking at it and wanting to do a trip, so we got on board a year ahead of time and started saving to go.”

What Colta appreciated most was the ability to sit back and relax while visiting New York City, Cooperstown, and Boston, checking out three stadiums along the way.

“It’s so nice that you don’t have to worry about parking a car or driving in a big city,” he said. “You can just relax on the bus. That’s the great part of it. Plus, there’s so much useful information, frequent stops, and side trips. It’s worth every penny.”

Aside from watching games at the major league stadiums, Colta and his daughter spent time together exploring each city, visiting New York’s Central Park and the 9/11 memorial, walking Boston’s Liberty Trail, and watching a play on Broadway.

“It was really cool to see the East Coast in the summertime,” he said.

Colta grew up on the West Coast and had never seen East Coast baseball stadiums before the Four Bagger tour. Visiting Busch Stadium and the former Hubert H. Humphrey Metrodome when one of his girls was playing a tournament in St. Louis was the closest he had come.

Still, baseball had always been a big part of Colta’s life. He coached little league before his girls were born and had season tickets to see the San Francisco Giants. Given his love for this American pastime, Colta had a goal in mind.

“I want to see all the stadiums before they tear them down and rebuild them,” he said. So far, Colta had seen 14 stadiums by traveling independently, and another three on his first Sports Travel and Tours trip this year.

Amanda Colta had joined her dad in his goal, and the two already have their sights set on a 2020 Sports Travel and Tours trip to see stadiums in Toronto, Detroit, and Cleveland.