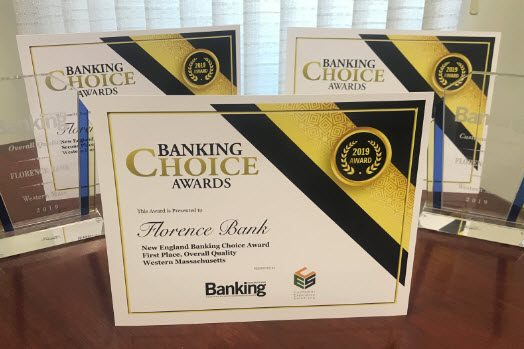 Recognition for customer service, overall quality, and technology and tools were accepted on June 28

FLORENCE—Florence Bank accepted three of the four potential awards for banking excellence in Western Massachusetts and took part in a panel discussion at the Bank Best Expo! at MGM Springfield on June 28.

As part of the 2019 Banking Choice Awards review by 278,359 independent consumers in a double-blind scientific study, Florence Bank came out on top in Western Massachusetts in almost every category.

At the expo, Monica Curhan, the bank’s senior vice president/marketing director, accepted two first-place awards, for customer service and overall quality, and a second-place honor for excellence in technology and tools.

Curhan also sat on a panel of bankers whose institutions consistently rank at the top in independent consumer surveys; they discussed best industry practices. Curhan was joined by Stephen Lewis, president of Thomaston Savings Bank and chairman of the Connecticut Bankers Association; Todd Tallman, president and treasurer of Cornerstone Bank in Massachusetts; and Mark Bodin, president of New Hampshire’s Savings Bank of Walpole.

“Every decision we make is with the customer in mind, so it’s nice to know our efforts are resonating with our customers,” said Curhan.

The Banking Choice Awards recognize the banks that receive the highest ratings from their own customers in four categories: customer service, technology, community contribution, and overall quality.

The rankings are based upon the Banking Benchmarks®, the industry’s gold standard of customer experience measurement, conducted twice per year among hundreds of thousands of households and businesses to get their unbiased opinions of the institutions with whom they bank.

Banking Choice Awards honored the top three institutions in each category from each region in Connecticut, Massachusetts, New Hampshire, and Rhode Island.

In addition to presenting the awardees, the banking expo also gives attendees the opportunity to network with peers, discover solutions from leaders in the banking community, and learn about the latest products and services in the industry.