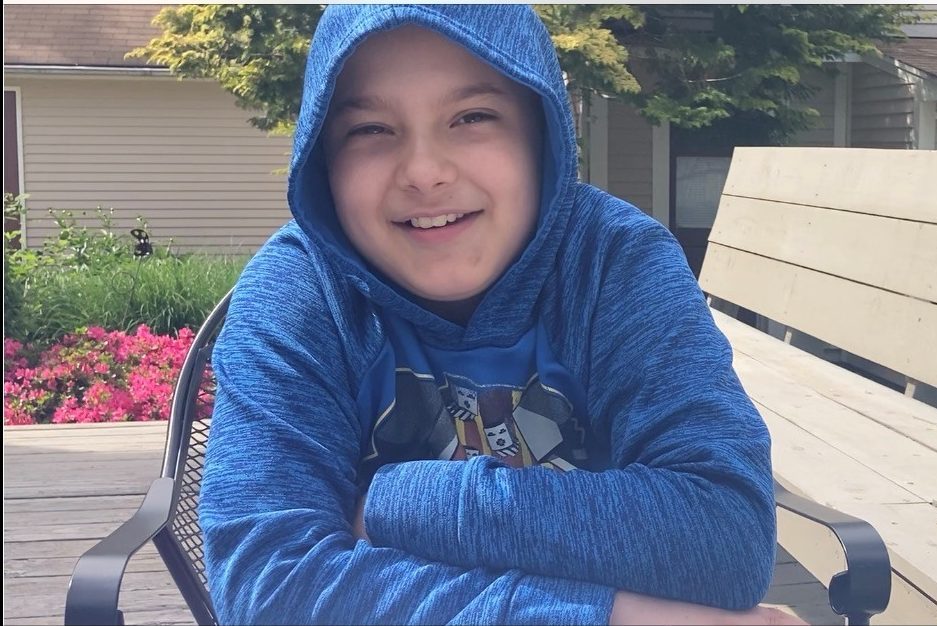 Beginning tomorrow, I’m launching a 20-day series of free podcasts on Janice Beetle Books, called Poem Pods, for children and families. They are low-tech broadcasts that aim to give children home on school vacation—without the benefit of summer camps and swimming pools—some encouragement, entertainment, and inspiration. (Read more about the substance of Poem Pods here.)

I host Poem Pods with my 11-year-old grandson Eli, and in addition to reading poems and talking about writing, we interview people about such things as friendship, family, asking for help, and the importance of inspiration and discipline.

The following is a schedule for Poem Pods, indicating each day’s topics and guests. If you would like to receive an email each day with links to the audio and a written script, sign up for my blog on Janice Beetle Books here.

Pod One: Meet Janice, Eli, and the Family
Airing on June 23
In Pod One, you’ll meet your narrators, Janice (known as Grammy in Poem Pods) and her grandson Eli. They explain what Poem Pods are, and Grammy reads a poem to introduce you to people in her family—who you’ll meet later in interviews about their work and their writing!

Pod Two: Poems About Pets
Airing on June 24
In Pod Two, you’ll hear what inspired Grammy to start writing when she was six and hear Grammy and Eli’s poems about pets. The activity is to write down some thoughts about your pets and share them with us in the comments on social media.

Pod Three: More Pets, and Eli Interviews a Writer
Airing on June 25
In Pod Three, Grammy talks more about her inspiration to write as a child and reads more poems about pets. Eli interviews a local writer, Craig Fear, and Craig tells a story about his dog and talks about the books he writes.

Pod Four: More on Inspiration, and Meet Auntie Molly
Airing on June 26
In Pod Four, Grammy talks about the typewriter her grandmother gave her that was an inspiration and reads two poems about imaginary things. We interview Eli’s Auntie Molly, a preschool teacher, who talks about children learning to read and write and the importance of creativity and inspiration.

Pod Five: Meet Eli’s Brother Darrian and Hear How He Learned to Draw
Airing June 27
In Pod Five, Grammy and Eli talk about reading and keeping a diary, and Grammy reads two poems inspired by water. Grammy also reads a poem Eli wrote when he was very young, about his Auntie Molly. And Eli interviews his brother Darrian, who is a budding illustrator who is drawing pictures that will go with some of Grammy’s Poem Pods, in a book she is working on. Eli asks kids to think about who they look up to—and tell a story about that person.

Pod Six: A Clown Poem, and an Introduction to Shel Silverstein
Airing on June 28
In Pod Six, Grammy talks about writing for her high school newspaper. Eli talks about learning how to interview people, and Grammy reads two silly verses. The day’s activity is to read a book by Shel Silverstein, who wrote wonderful poems.

Pod Seven: Thinking and Writing about the Things We Don’t Want to Do!
Airing on June 29
In Pod Seven, Grammy talks about writing for her college newspaper, and she and Eli talk about when you have a total lack of inspiration and don’t want to do anything! The activity is to think about the things you don’t like to do, and brainstorm rhymes about them! Use RhymeZone.com if it helps!

Pod Eight: When We Need Encouragement, and Writing About Our Feelings
Airing on June 30
In Pod Eight, Grammy and Eli talk about when we sometimes need encouragement—or inspiration from others—we hear a poem about a gymnast, and then we meet the gymnast! She is Grammy’s daughter and Eli’s mom, Sally. Sally talks about why and what she wrote when she was young. Sally also talks about sharing feelings and her work now as a medical assistant! The activity is to read a book by Dr. Seuss, who was a master of rhymes!

Pod Nine: Masks, a First Reporting Job, and Rhymes
Airing on July 1
In Pod Nine, Grammy and Eli talk about their masks. Grammy talks about her first job as a reporter, and she reads a poem that is her and Eli’s favorite. Grammy and Eli have fun making rhymes together! The activity is to think of things in the world around you and make up words that rhyme!

Pod Ten: Illustrators, Snitfits, Being Vulnerable, and a Healthcare Hero
Airing on July 2
In Pod Ten, Grammy talks about reviewing picture books for the newspaper. Grammy and Eli talk about bad moods, snitfits, and feeling vulnerable. Eli interviews an EMT, Amanda Roberts, who talks about her work and what it’s like to wear a mask all day! The activity is to write about a time when you felt sad or mad. That’s a lot harder than writing about when you were happy!

Pod Eleven: Ladybugs Poems, and Making a Healthy, Ladybug Snack
Airing on July 3
In Pod Eleven, Grammy and Eli talk about Grammy’s work—including helping the Eric Carle Museum of Picture Book Art. They also talk about what Eli wants to be when he grows up, and Grammy reads two poems about ladybugs. Then, Grammy walks Eli through the process of making a healthy snack that looks like a ladybug!

Pod Twelve: Talking About Grief and Humor
Airing on July 4
In Pod Twelve, Grammy talks about the memoir she wrote about grieving, and she and Eli talk about what people can do when they are feeling sad. Grammy reads a funny poem to Eli, and Eli and Grammy talk about humor and act out a funny story from when Eli was young. The activity for the day is for parents and children to work together to record a funny story about their child—in a story, a video, a drawing, or in audio recording only on a smartphone.

Pod Thirteen: Talking about Listening, Grace, Compassion
Airing on July 5
In Pod Thirteen, Eli and Grammy talk about listening to others’ feelings, and having grace and compassion. Grammy talks about her work in helping people turn an emotional experience into a book. Eli and Grammy act out a conversation they had years ago that demonstrates Eli’s compassion as a tiny boy. (It’s also so silly.) The activity is for parents and children to tell a funny story and write it down or create a video to preserve it and to also record their COVID-19 stories.

Pod Fourteen: Why Family is So Important—All the Time, and Especially Now
Airing on July 6
In Pod Fourteen, Grammy talks about her friend Judy Kelliher’s book, which is about Judy’s brother Bobby and will be available soon. The daily poem is also about family. Grammy interviews Eli and his mom and dad about why family is important—all the time, and especially now. The activity is for children to interview someone in their family about a funny family story!

Pod Fifteen: Telling Other Peoples’ Stories and Interviewing Best Friends
Airing on July 7
In Pod Fifteen, Grammy talks about her work, helping people publish their own stories in the form of books. She reads poems about friendship, and then Grammy interviews Eli and his best friend, Miggz; they talk about what they look for in a friend and why friends are important. The activity is to write a story about your good friend!

Pod Sixteen: Finding Inspiration in the Woods
Airing on July 8
In Pod Sixteen, Grammy reads two silly poems that are among her favorites, and Eli interviews his Uncle CJ; CJ talks about his canoe and camping in the woods with Auntie Molly, and what inspires him about being outdoors. The activity is to take a walk, look for wildlife, and observe nature!

Pod Seventeen: When You Need Inspiration from Others
Airing on July 9
In Pod Seventeen, Grammy reads poems about boys and girls, written from her perspective on gender. Eli interviews writer Judith Kelliher, who has recently published a book about her brother Bobby’s service in Vietnam; Judy talks about how she sometimes needed others to inspire her to finish her book. As today’s activity, children are invited to listen to Judy read an excerpt from the beginning of her book, in which she talks about who inspired her to keep writing when she felt afraid.

Pod Eighteen: Meet an Air Traffic Controller at Bradley and Learn About Highways in the Sky
Airing on July 10
In Pod Eighteen, Grammy and Eli talk about love. Grammy reads a poem about love, and then our co-hosts bring Grammy’s husband, Steve, on to talk about Steve’s work as an air traffic controller at Bradley International Airport. Today’s activity is to watch the sky to see what planes are flying over your heads, and to search on Google for the aircraft Steve describes to see what they look like!

Pod Nineteen: Talking and Writing About Age
Airing on July 11
In Pod Nineteen, Grammy and Eli talk about a person’s age and also responsibilities. Grammy says she is writing a book of children’s poems about the ages one to 18, and she reads a poem about the age of three. The activity is to write a poem or a story about the age you are at now!

Pod Twenty: Three Final Poems, and a Talk on Learning Discipline
Airing on July 12
In Pod Twenty, Grammy reads three final poems, and Grammy and Eli talk with Eli’s father, Tommy, about karate and also discipline—how you learn it, and why we need it. The final activity is for children to inspire yourselves and think about what to do that will be creative.