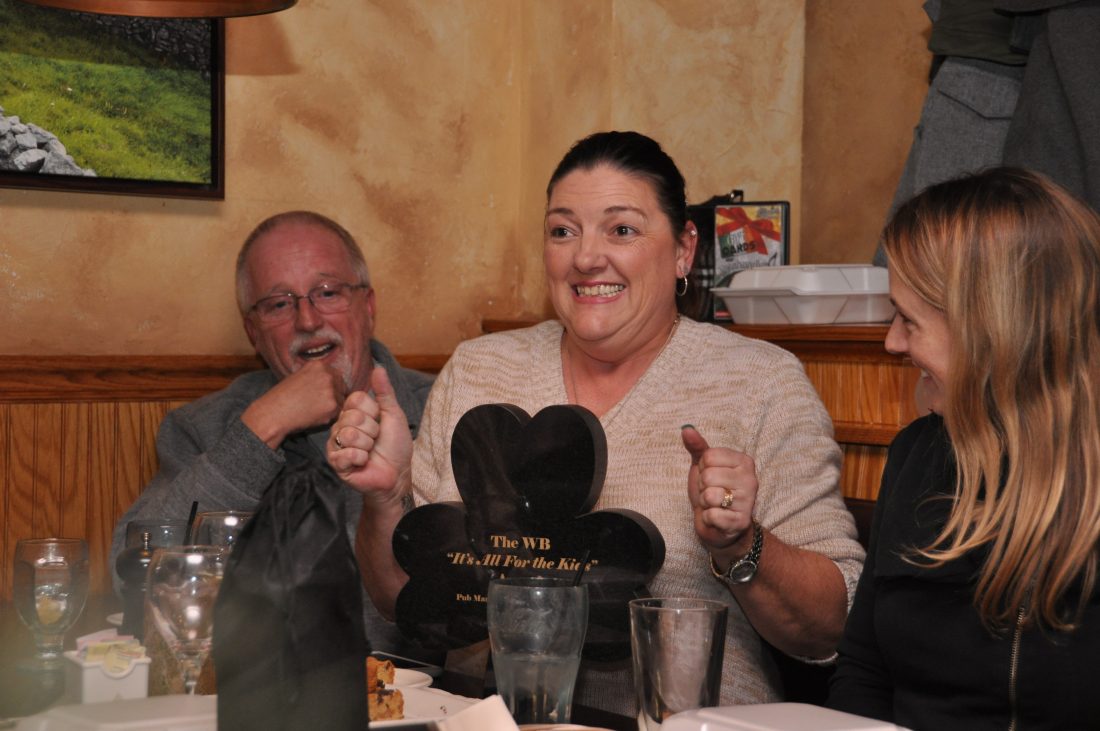 GILFORD—When Will Swart was first invited to take part in Pub Mania as a team captain by Patrick’s co-owner Allan Beetle three years ago, Swart was sure his 24 teammates could each raise the suggested $100.

Made up of employees and riders associated with the Laconia Harley Davidson dealership in Meredith, where Swart is general manager, team Laconia Harley Iron Butts felt great about the idea of raising $2,400 to benefit the Greater Lakes Region Children’s Auction. Swart remembered that a collective reality soon dawned on them, though: They could raise even more.

“Our efforts snowballed from there,” Swart said.

“We are incredibly awed and grateful to everyone who took part, and we’re proud of Will’s team—the top fundraiser at over $31,778,” Beetle said.

“Our biggest reason for wanting to get involved in Pub Mania was to channel what we can do as a business, a dealership, a group of people, into a charity that does so much for the community we live and work in,” Swart said. “Part of the joy of participating in Pub Mania is just the fun of doing it, part of it is supporting the charity itself, and part of it is the competitiveness.”

Jaimie Sousa, chair of the Children’s Auction since March, said each year the board braces itself to learn the Pub Mania total. “We hope for the best, and then we’re thrilled when the fundraising amount is even more than we expected, going up $40,000 or $50,000 each year,” she said. “It’s hard to think about what our community would look like without fundraising from Pub Mania. So many local agencies depend on it.”

Funds that funnel through Pub Mania to the auction provide such things as lunches for children in the Lakes Region who don’t know where their next meal is coming from. The dollars provide food, clothing, shelter—and even Christmas gifts—for families in need. It also offers enrichment through support of organizations such as the Boys & Girls Club of the Lakes Region and other mentoring programs that give children a safe place to play and “a glimpse of what life can offer,” Sousa said.

“This makes a difference in people’s lives,” Sousa added. “That’s what we hope for.”

The Children’s Auction was created in 1982 by Warren Bailey, then a radio DJ on WLNH, who started conducting the event on air. In 1998, Sousa said the auction became televised. It continues to follow the same general agenda: Tuesday through Saturday, during the first week of December, items are auctioned off, and the proceeds benefit dozens of local nonprofits.

Many people get involved—from donating items to raising money to shopping the auction. Some tell stories that help others understand the need. “Leaders from the nonprofits we support speak and share stories,” Sousa said, “and we have groups of young people doing community service hours and getting interested in giving back. It’s cool to see there is a next generation for the Children’s Auction.”

Swart said his wife, Kathy, is a very active member of the Iron Butts because she was once a single mother and remembers what it was like to need—and receive—community support. “Now she wants to help others,” Swart said.

In addition to raffling off the Harley, the Laconia Harley Iron Butts organized fundraising events like Biker Bingo Nights, which typically raised about $1,000. They collect donations during customer grill-outs, and one employee—the team’s top individual fundraiser—brought in more than $1,800 by selling handmade ornaments.

As captain of her own team, Fusion, Sousa also knows the adrenalin rush that comes with bringing in more—and more, and more. Fusion is made of up young professionals. They raise money through admission to networking and special events, as well as individual team member fundraising initiatives. This year, they raised over $15,000.

“I’m really happy that I can be a part of it in both ways,” Sousa said, speaking of her role with the auction and as a participant of Pub Mania. “We’re all working toward the same goal.”

She added, “I credit Pub Mania with really giving the auction a year-round face and a way to fundraise throughout the year. Thirty-one teams are all promoting their own events and fundraising in a variety of ways. It’s an amazing thing.”