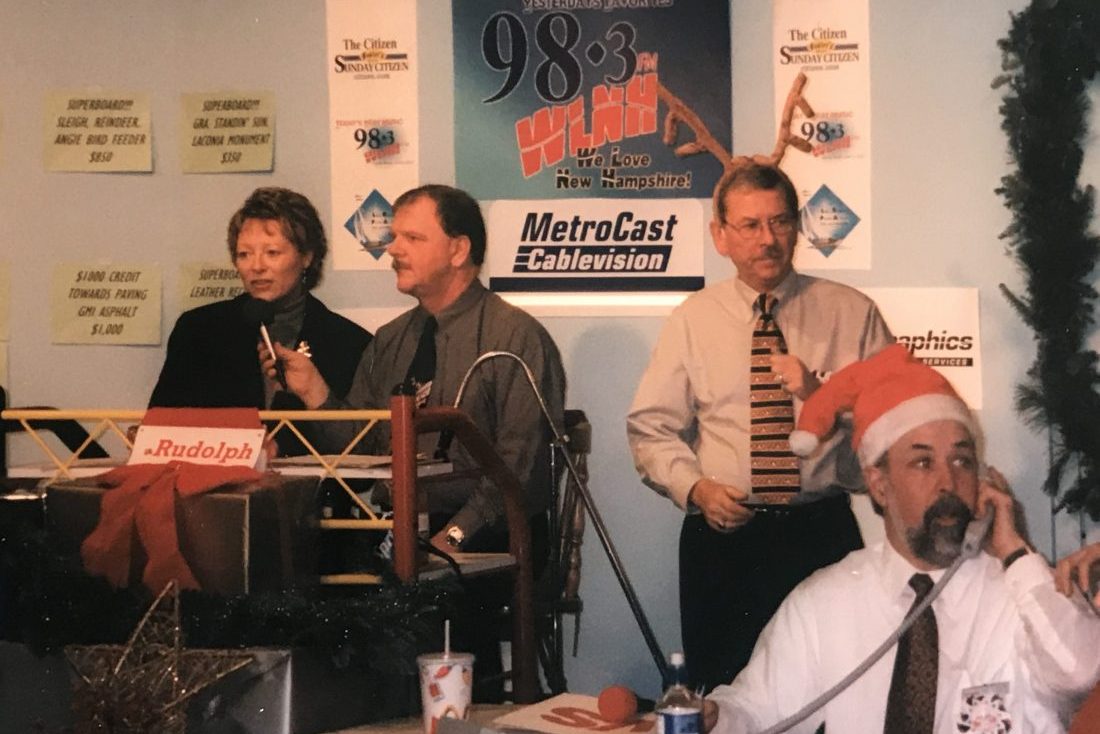 I help the Greater Lakes Region Children’s Auction in New Hampshire with promoting its good work—raising money to offer support to children and families. I interview volunteers and pen blogs about their contributions over the decades. This piece is about Terry Hicks, who offered to televise the event many years ago, greatly expanding its reach.

Back in December 1998, Terry Hicks was brand new in the role of general manager for MetroCast in Laconia. He was also a brand-new resident of the Lakes Region. When he heard Warren Bailey broadcasting the Children’s Auction from his van in downtown Laconia, though, Terry acted the way a native member of the community would.

He offered to help—in a big way.

“I said, ‘I have access to television equipment if you want to broadcast this,” Terry explains, noting MetroCast donated all the equipment to Lakes Region Public Access, and, a year later, the Greater Lakes Region Children’s Auction was televised, in 1999.

“Warren was doing a lot of stuff for the community,” Terry adds. “It just caught me that maybe this is something we could do to help him expand, and he could raise more money if he had more exposure, and sure enough, it worked.”

Terry was grateful to be connected with Warren and other fellow advocates of the Auction, such as businessmen David McGreevy, who spearheaded the building of an elaborate set from which the Auction took place, and Alan McRae, who worked for the telephone company NYNEX and made it possible for the Auction to have four phones, instead of one.

“I really enjoyed the relationships that we had,” Terry says. “They brought all the excitement. There was always a discussion about whether we’d beat the last year’s number. Every year, I was there, and I think every year since, they’ve beat the prior year. It was great. It was something you looked forward to. You started planning for it in July—what the approach was going to be, who was the staff.”

Broadcasting on WLNH from an unheated van parked on North Main Street, Warren raised $2,100 in his first auction year. Over time, volunteers like Terry began to trickle in by ones and twos and then in groups. The Auction now involves thousands, many of whom give up a week’s vacation for the privilege of taking part in dozens of ways.

Terry, who is now retired and living in Philadelphia with his wife, Cathy, worked in cable television starting in 1972. He has lived in Colorado, Maryland, New York, and Massachusetts and has worked for American Television and Communications Corp, which became TimeWarner, in various leadership roles.

He was on the team that built the cable system in Rochester, New York, and was in the general manager role in Laconia when MetroCast rebuilt the system there.

In terms of the Auction, Terry didn’t just help broker equipment for broadcasting. “I was more of a volunteer,” he says, modestly, explaining when prodded that he spent a week at the Auction each year, like many others, turning the board that, back then, kept track of what was being auctioned off, what had been bid, and the current bid amount.

“In my first year, we had a board that flipped around and showed nine positions—for nine items—on a white board,” Terry explains. “When someone called to make a bid, I’d erase the former bid and mark a new one.”

On the other side of the board, Warren’s daughter was reloading new items. “It wasn’t nearly as automated as it is today,” he says.

“I was there all day for the whole week, and every now and then, somebody would come and substitute on the board, so I could drink a cup of coffee or have a Coke or something,” Terry says. “Jennifer and Cathy did a phenomenal job of organizing the items for sale and keeping them straight.”

Terry retired from the cable industry in 2003, and in 2008, after living in the Lakes Region for about a decade, he and Cathy moved to Philadelphia to be closer to their daughter and granddaughter.

Terry has returned to the area once to attend the Auction, and still keeps in touch with Warren and David and Susan Rountree, volunteers who he called “huge motivators.”

“Taking part in the Auction was a wonderful experience for me,” he says. “It’s something I’ll never, ever forget.”