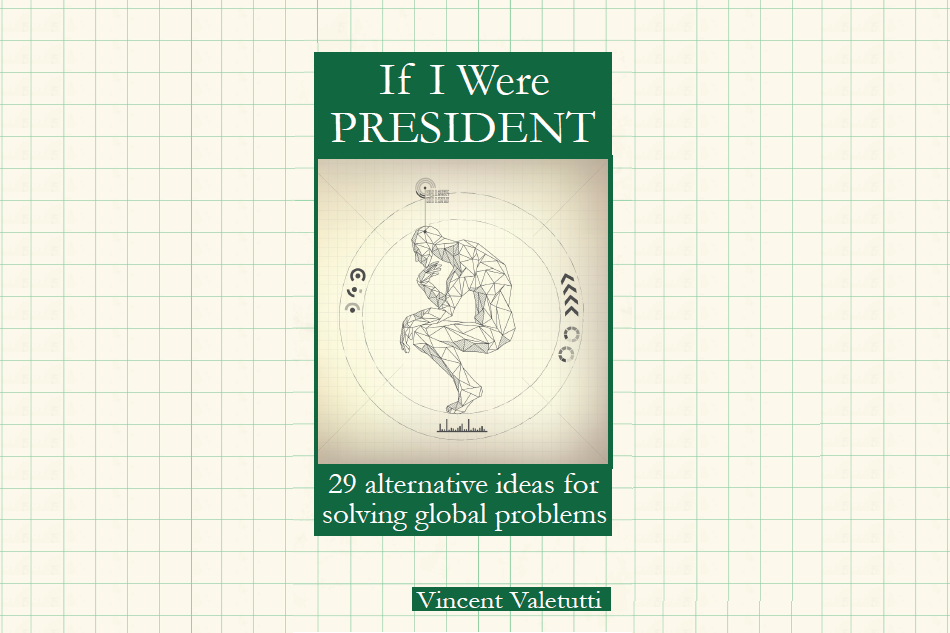 NORTHAMPTON—Vincent “Vinny” Valetutti has published “If I Were President: 29 alternative ideas for solving global problems” in the days before the presidential election to get Americans thinking about solutions—rather than controversy.

Valetutti is not a candidate for any office. His book is intended not as a platform for a campaign but instead to raise awareness and offer frustrated voters some food for thought.

“Thanks to Greta Thunberg, the young Swiss environmental activist, I was motivated to get my ideas down on paper, in this book,” Valetutti writes in the book’s introduction. “I set my ideas down, and now I hope to motivate you.”

The 29 ideas in “If I Were President” are presented in these eight categories: Invitation to All World Leaders, Military, Constitutional Amendments, Capitalism, Social Issues, Energy Conservation and Environmental Protection, Health Care, and Patents.

Valetutti is a retired engineer. What is unique about his book, and his ideas, is that they do not fall on party lines. He is not a Democrat, Republican, or Independent; his ideas are fresh and varied in terms of perspective.

As he is quoted as saying in the foreword—written by Janice Beetle of Janice Beetle Books, who helped Valetutti develop the manuscript— “I consider myself a realist.”

“If I Were President” is now available at www.levellerspress.com/product/if-i-were-president-29-alternative-ideas-for-solving-global-problems/. An ebook is also available at https://www.amazon.com/dp/B08M6382NW/ref=sr_1_7?dchild=1&keywords=if+i+were+president&qid=1603978614&sr=8-7.

Before working on his book, Valetutti’s first public show of activism came in the spring when he designed and constructed a Sea Level Rise Ruler to raise awareness about the problem of rising sea levels in the world.

The traveling flagpole assembly holds a 30-foot high banner that replicates a ruler, with exact measurements in feet. Valetutti towed the ruler to Northampton and had it on view this summer, and in September, he towed it to Washington, D.C., for viewing.

“When people stand next to the flagpole and see how high that really is, it shows how legitimate and scary the reality of rising sea levels is,” he said. “If sea levels rise this much, we will face an economic disaster that will be very significant, drastically changing the world as we know it.”

Valetutti hopes to reach concerned citizens across the country. To learn more about his Sea Level Rise Ruler, visit www.sealevelriseruler.com