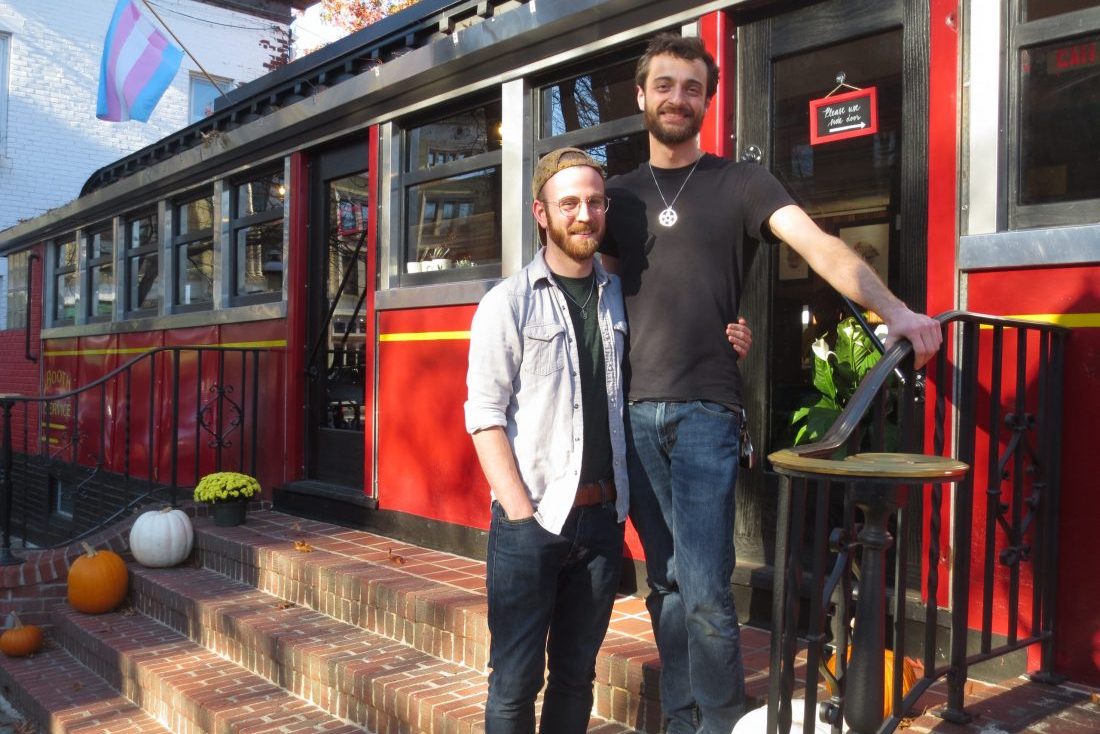 For the past few years, I’ve been writing blogs for Florence Bank that shine a light on commercial bank customers—typically entrepreneurs who started their businesses and built them over time. The blogs post in a series called From the Ground Up. This particular post features the owners of Familiars Coffee & Tea in Northampton.

Danny McColgan knew tea. His business and life partner, Isaac Weiner, had experience as a barista. Together, they had the passion, knowledge, experience, and good taste to run their own coffee house. But there were still many roadblocks to starting out on their own—fear and funding chief among them.

Then, several years ago, Isaac’s father showed them a clip from the Wall Street Journal, a feature story highlighting peoples’ various regrets, by decade. Danny says, “The regret for people in their 20s was not taking enough risk when you had the time to bounce back.”

Danny, 28, and Isaac, 30, realized then they had the time to fail, change gears, and recover, if need be. So, they threw themselves into the hard work that eventually enabled them to become the owners of Familiars Coffee & Tea at 6 Strong Avenue in Northampton; Florence Bank is proud to have them as business customers.

When Danny and Isaac put their energy into their dream, Danny had served as a manager at a loose-leaf tea retailer in Boston, and he held a bachelor’s in art history from the Mass College of Art and Design in the same city. Isaac had a solid resume in coffeehouse operations and management as well as a bachelor’s in religion and philosophy from Trinity College in Hartford, Connecticut.

Isaac was relatively new to the Pioneer Valley; Danny grew up in Springfield. They had discovered what the area had to offer in terms of coffeehouses—and Isaac had worked in several—and they thought they could compete. “We knew it was time to take that terrifying jump,” Isaac says.

The two developed an ironclad business plan, which they took to friends and family members to build financial support. Two years ago, with their own funds and those from others, they connected with Gary Perman, who owns the diner that houses Familiars.

The lunch car was manufactured at a plant in Worcester in the 1930s. Over the years, it has housed Miss Northampton Diner, the Red Lion Diner, and, most recently, Kathy’s Diner.

Perman bought Kathy’s Diner from Kathy Tefft in 2013 and originally intended to raze it and build a parking lot. When he discovered the rich history, he decided to play to that strength. He signed a lease with Danny and Isaac, and, over two years, they brought new life to the property that Perman had already gutted.

Familiars opened in February, offering a wide range of quality coffees and teas as well as breakfast and lunch. The restaurant has a new floor plan as well as high-quality vintage highlights from antique wooden walls to steel and stone elements.

With an abundance of coffee shops and cafes in the Northampton area, Danny and Isaac knew they needed a niche. What they came up with is a broad range of high-quality coffees and specialty teas, good food that is served “insanely fast”—for people who stop in on a break from work—,and excellent customer service.

“We feel like having a marriage of all three of those aspects would make us stand out,” Danny says.

Customers tend to be people who work in downtown Northampton and run over to the coffee shop on a break, people who come in to sit and work or network, and people who simply enjoy eating in coffee shops.

In working to meet the “good food” criteria, Danny and Isaac offer fresh foods and a variety of vegetarian and vegan options; avocados and tempeh bacon are featured in many menu items.

Produce comes from Boston markets, Hudson Valley, and the Pioneer Valley, when in season and available. Vegan cream cheese is purchased at Cornucopia in Northampton.

Isaac says the biggest fear he and Danny have is letting down those who supported them. That will likely not be an issue, though. “We’re ahead of schedule,” Isaac says. “We hit our first-year income projections in the first six months. I do think it’s going very well.”

The staff fluctuates between 10 to 15 people, depending on the season, which ebbs and flows as the region’s college students come and go. Danny says weather also affects the traffic in the diner. “Rain is worse than snow,” Danny says, noting people don’t want to run out for food on a rainy day.

Both Danny and Isaac are grateful to Florence Bank, which holds the business’ bank account. “We thought it would be better for our brand to work with Florence Bank,” he says. “Florence Bank is not pushy. It has a relaxed way of guiding us as new businesspeople. We receive great customer service.”

Staff also come into the coffee shop to eat, and Isaac says it’s easy for one of them to run up to the corner to make a deposit. Also, when large purchases are necessary, it’s easy to put in a call to a Florence Bank staff person to increase the spending limit temporarily.

Young people starting off in business should know that it is every bit as hard as people say it is. Danny and Isaac spend 90 percent of their time at the diner, rarely experiencing time off together and working at least 12 or 13 hours at a time.

They also say people should lean on friends and family for support ranging from funding to services. Their grassroots-friend-and-family efforts have provided them with free advice, ideas, and marketing and design services.

Currently, Danny and Isaac are involved in a rebranding that draws more on the building’s history, and they will soon launch a new website. “We’re excited with the direction we’re taking and excited we’re even able to pursue that,” Danny says.