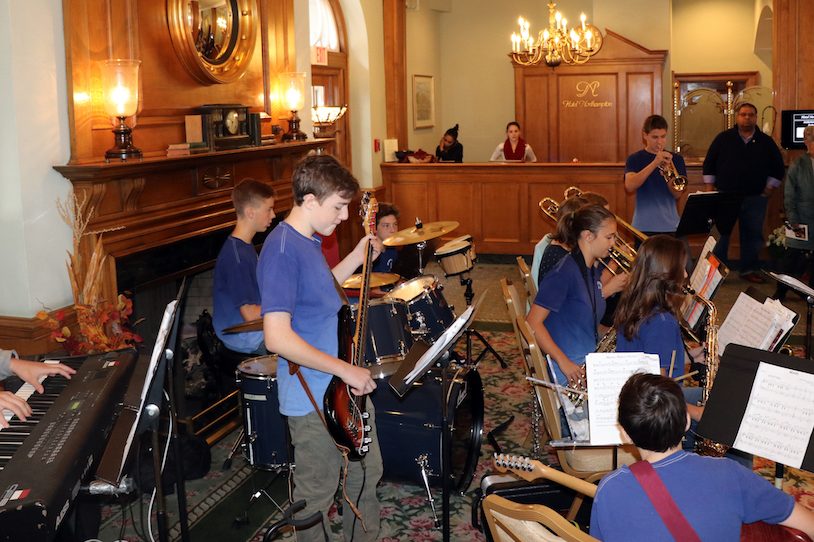 $6,000 in donations will support workshops with professional jazz musicians

NORTHAMPTON—One of the first students Paul Kinsman got to work with when he landed a student teaching position at Northampton High School was Elliot Ross. “He was a soft-spoken, kind young man who was looking to play bass guitar,” Kinsman remembered. “As a person, Elliot was funny, intelligent and had a huge soul. As a musician, he was a big collaborator. He had a large community of musicians with whom he was friends and with whom he made music.”

When Ross died on Nov. 2 last year, at the age of 21, his parents, Hank and Paula Ross, asked that donations be made to the Jazz in the Schools Program, which had been launched at John F. Kennedy Middle School in the fall of 2018 by organizers of the Northampton Jazz Festival; the goal was to expose student musicians to the mentorship of professional jazz artists. That program still exists and is called the Davis Financial Group Jazz in the Schools Program in honor of its donor.

Nearly 60 individual donations have been received in Elliot Ross’ memory, totaling just under $6,000, and those gifts will support making music available to more students, but this time at Northampton High School. This second program has been named the Elliot Ross Jazz in the Schools Program, and it will continue to expand students’ exposure to jazz at the high school level, along with the high school’s newly formed jazz band and jazz vocal band, led by Kinsman, Northampton High School’s new director of instrumental music.

“Bringing my love of music to Northampton High School has been a dream of mine, and the Jazz in the Schools program is going to be instrumental in doing that,” Kinsman said. “It’s bittersweet being able to do so with the help of family and friends of a student who passed away and an arresting reminder of how deeply we are connected through what we love.”

“We are profoundly touched by the outpouring of support that the Ross’ family and friends have provided to the Jazz in the Schools Program in Elliot’s memory,” Northampton Jazz Festival President Ruth Griggs said. “The $6,000 raised to date will support this second Jazz in the Schools Program for at least two years, with workshops with professional jazz artists occurring three times a year.”

This year’s workshops start on March 4, when vocalist Samirah Evans—billed as a “soulful” performer with New Orleans roots—and trumpeter Don Anderson, along with the Green Street Trio will be working with the high school jazz band. The students will incorporate their learning into a New Orleans jazz-themed performance during an all-school assembly at the high school on March 5 at 12:30 p.m., accompanied by the Green Street Trio. Both Evans and Anderson will then perform at Northampton’s City Sports Grille on March 5 at 7 p.m. as part of the weekly Northampton Jazz Workshop, and students will be invited to join the jazz jam in the latter part of the evening.

The Davis Financial Group Jazz in the Schools Program will continue at the JFK Middle School as a collaboration between Northampton Jazz Festival Producer Paul Arslanian and JFK Middle School Band Director Claire-anne Williams. Two programs are already scheduled for the spring semester at JFK Middle School. Workshops will be led by saxophonist and educator Don Braden on Feb. 11 and 12, and by tenor saxophonist and vocalist Camille Thurman on May 20 and 21. Both musicians will be accompanied by the Green Street Trio.

The Davis Financial Group Jazz in the Schools Program—the original program—took shape last August, when Northampton Jazz Festival organizers teamed up with Northampton public schools to bring professional musicians to the middle school to work with students in the seventh and eighth grade jazz bands, thanks to initial donations by the Davis Financial Group of Hadley. Gary Smulyan, the most acclaimed jazz baritone saxophone player in the world for 12 years, kicked off the program with an Oct. 29 workshop, shortly after the conclusion of the 2018 Northampton Jazz Festival.

Prior to the fall of 2018, students who studied jazz with Williams at JFK Middle School were unable to continue their studies at the high school level within the Northampton school system. That all changed when Northampton High School launched its jazz band and jazz vocal program with the start of the school year.

“Now, with Paul Kinsman leading the jazz band at the high school, students can continue the jazz education they started in middle school,” Griggs said. “It opens up a new realm of possibility for aspiring jazz musicians. Having the Elliot Ross Jazz in the Schools Program to enrich and expand their exposure to live jazz performance is a tremendous bonus for the high school students.”

“I hope the Elliot Ross Jazz in the Schools Program will be a longstanding program at Northampton High School,” Kinsman said. “By carrying Elliot’s name forward, we’re nodding to the fact that this style of music could be somebody’s entrance into a life-long love of music.”

As a freshman in 2012, Ross was a student in Jazz Workshop, a class Kinsman was student teaching where students would study the genre, build their repertoire and perform songs. Even after Ross graduated, Ross and Kinsman stayed in touch, reuniting in 2015 in Vietnam—where Kinsman was teaching and Ross was traveling—to talk about Ross’ musical dreams.

“Elliot’s first love was jazz, but that branched off to include other styles like funk and rock,” Kinsman remembered. “Everyone loves music, but not everyone finds their love of music through band or chorus. Elliot found that love by playing jazz with his bass, which is why carrying on his name through the Jazz in the Schools Program is so important. It means making music as inclusive as possible.”