Telling Feisty Stories for a Client 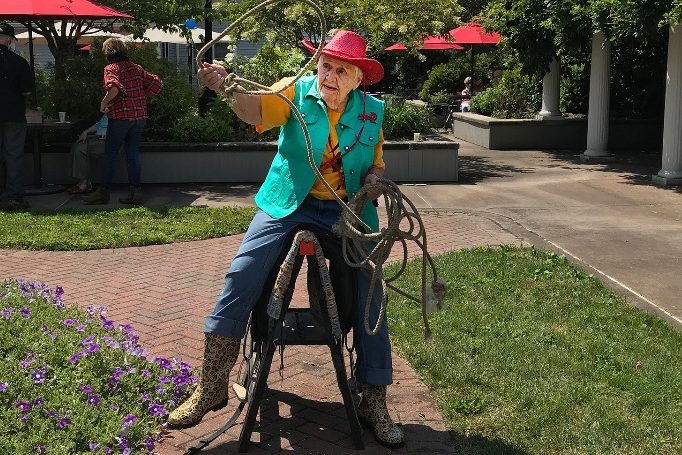 Note: For many years, I helped Glenmeadow, a retirement community in Longmeadow, Massachusetts, tell stories about its programs, services, staff, and residents. Last year, as doors began to open around the nation, I wrote a series of stories for Glenmeadow on residents and the excellent work the community did in protecting everyone during the pandemic. I had so much fun telling this story, about Marion Grimes.

(Remember, what I do for clients, I can do for you!)

Marion Grimes is so adventurous. She was the first to ride a bucking bronco in our rodeo several months ago.

Well, it wasn’t actually bucking, and it was a sawhorse, rather than a bull, but Marion was unfazed. She used her imagination. She wore a red cowboy hat for the occasion, along with a bright aqua-colored vest and leopard-spotted boots—things she keeps because, as she says, “You never know.”

“I bobbed myself up and down as if I were riding,” Marion explains. “I even had a lasso made of rope that I twirled. Life is fun for me.”

Indeed, Marion knows how to live to the fullest. She became a Girl Scout as a child, and that gave her a taste for adventure as well as travel. She performed in a drum and bugle corps, and “paraded all around New Jersey” before earning bachelor’s and master’s degrees and serving for 14 years in the United States Marine Corps.

While she raised three children, Marion also was an entertainer. She’s a professional clown with Clowns of America International, and for decades, she enjoyed making children giggle with her balancing feathers, magic wand, and juggling tricks.

Marion learned about Glenmeadow because one of her daughters, Lauren Winn, lives in Southwick. Last year, Lauren wanted her mom to move closer to Greater Springfield; Marion had lived for decades in New York, near Schenectady. Lauren picked five retirement communities to visit with Marion, and Marion chose Glenmeadow, in large part because we were the only community with a pool and jacuzzi.

Marion has loved to swim since she was a young child, and she says the jacuzzi is a must for soothing the aches and pains that come with age—and her clowning-around days.

Because of the pandemic, ironically, Marion didn’t see much of Lauren—or her son, Gary and his wife, Susan, of Milton—after she moved in here in January because the pandemic struck the region; our safety protocols meant that residents were tucked securely in their apartments.

Now, though, Lauren and Susan regularly visit Marion, take her on errands and to medical appointments, and they bring her meals. Marion’s daughter Kathe Elson lives too far away to visit regularly. She’s in Fountain Hills, Arizona, but Marion credits Glenmeadow with connecting her to her far-away child as well.

A live program that was reinvented to a virtual one during the pandemic, called “A Conversation with Anne,” gives Marion and Kathe a line of communication and discussion topics.

Anne created the call-in television show to keep the dialogue going with residents during COVID-19, and we’re pleased that connection has extended to residents’ families as well. Each Wednesday afternoon, Anne offers news and information, which is livestreamed via our in-house television channel, Channel 918.

Marion watches the show on her TV, and Kathe tunes in at home, via YouTube. “I try and watch it religiously,” Kathe says, “It brings a lot of things into focus, and it’s important to me.”

Sometimes after Anne’s show is over, Kathe calls her mother to talk about some element of the program. “We ask each other, ‘What did you think about that,’ and we have a conversation,’” Kathe says.

Says Marion, “It’s great for a mother and daughter to be able to communicate, and Anne helps us with that.”

Marion recently earned her 80-year Girl Scouting pin. She has served as a troop leader and trainer, and as an organization vice president. Also active in the YWCA, Marion has traveled around the world, and she’s collected art and artifacts along the way. When she moved here, she was pleased that our staff member John Pellan hung her masks and dolls on her walls, along with a map of the world with pins that show all the places she has visited.

While serving in the Marine Corps from 1950 to 1964, Marion rose to the rank of major. One accomplishment she is most proud of is leading a platoon of women marines through the streets of New York in a parade—as her parents watched from the stands.

Marion has not slowed down. As she says, “I’m very happy.”