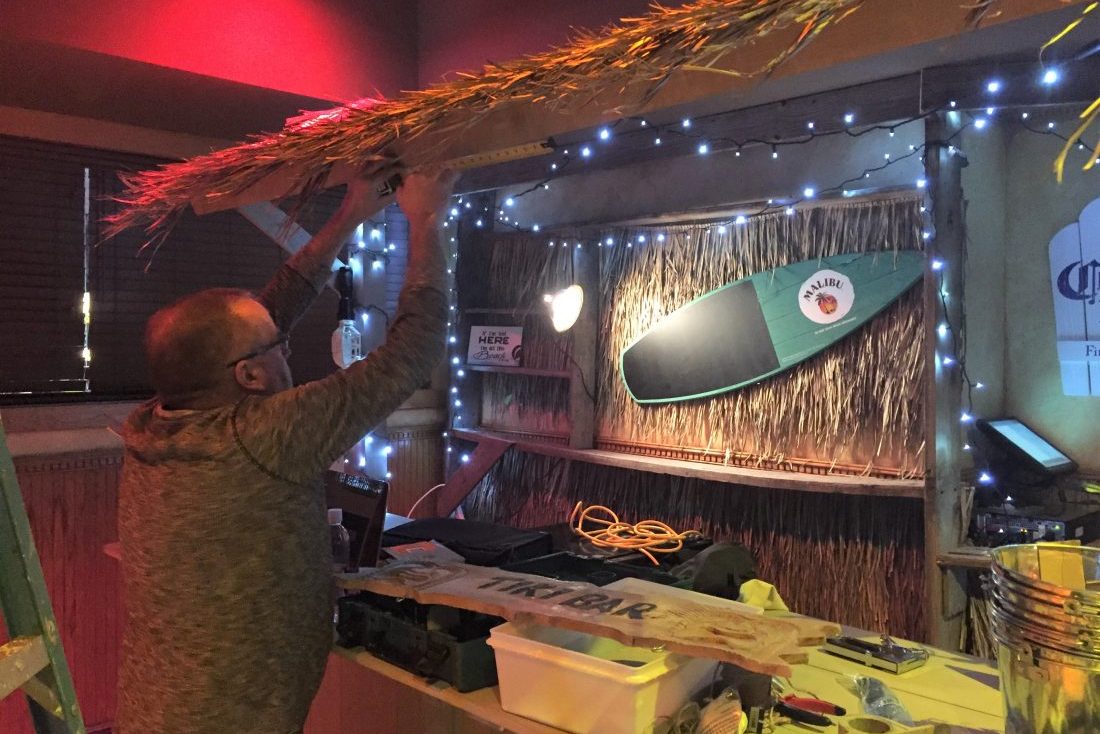 GILFORD—The owner of Remodeling Remedies, Jonathan “Jon” Booth gets summoned to Patrick’s Pub & Eatery plenty for help with renovations and other projects. But when Co-owner Allan Beetle called Jon last winter and said he had an idea, Jon sensed an innovation in the works.

“Allan sounded as giddy and excited as a 10-year-old boy,” Booth remembered. “He asked me to meet him at Patrick’s. I couldn’t get out of my truck fast enough for him that morning.”

The two men walked inside from the parking lot, and Beetle led Booth to the Emerald Room and flung open the doors. Turning to Booth, Beetle said: “Beach Bar.”

“I told him he was crazy!” Booth recalled. “I said, ‘If you’re going to go through with this, you have to go all out. You have to bring in sand, the whole nine yards.’”

He dove into the vision, and, before long, a 20-foot boardwalk and a tiki bar were assembled in the Emerald Room. Six thousand pounds of sand were hauled in by Tyson McKenna, the owner of Gilford Gardens, who spread it over a tarp on the dining room floor. A tropical oasis was born for our customers in the middle of a cold New Hampshire winter.

If you visited the Beach Bar last April, you might remember squishing your toes—or your boots—in the soft sand and drinking a fruity beverage. This month, Patrick’s Pub & Eatery is bringing the bar back on Friday, March 29 with a Grand Opening party and some great new features.

“People loved the Beach Bar,” Booth said. “They thought Allan was crazy at first, but a lot of people I know appreciated the fact that he’s willing to step outside the box. “Lots of folks came down to Patrick’s just to check out what Allan was doing. It definitely got people’s attention.”

Faith Francis, a Patrick’s customer since it opened, was amazed by the scene the first time she walked into the Emerald Room and found a beach. She didn’t get away to a warm location last winter and considered the Beach Bar her tropical escape—just a mile and a half from her home.

“It’s a really cool endeavor for Allan and Jeff to bring a little Caribbean flair to the Lakes Region when there really isn’t anything similar without getting on a plane,” said Francis, who works as regional sales manager for Binnie Media.

Beetle leaned on Booth to bring his plan to life. Booth created the boardwalk and tiki bar, building the latter upstairs on the patio in 25-degree weather; then, he dismantled it and reassembled it inside. He said Megan Page, Patrick’s general manager, was a huge help in the process.

Booth has been a loyal Patrick’s customer for more than 15 years, and he said having the Beach Bar helped mix things up at the restaurant during a traditionally slow month.  “We added lots of fun things to really create the atmosphere we wanted,” he said. “Floor-to-ceiling, full-color posters, sand, wind, beach smells, the sound of waves, and more all came together to put you in that kind of mood.”

In addition, Booth enjoyed the wall ring-toss game in the Beach Bar—also an idea of Beetle’s. He took part in the game tournament at the end of April, splitting the $500 prize money with four other local residents who were in the top five slots.