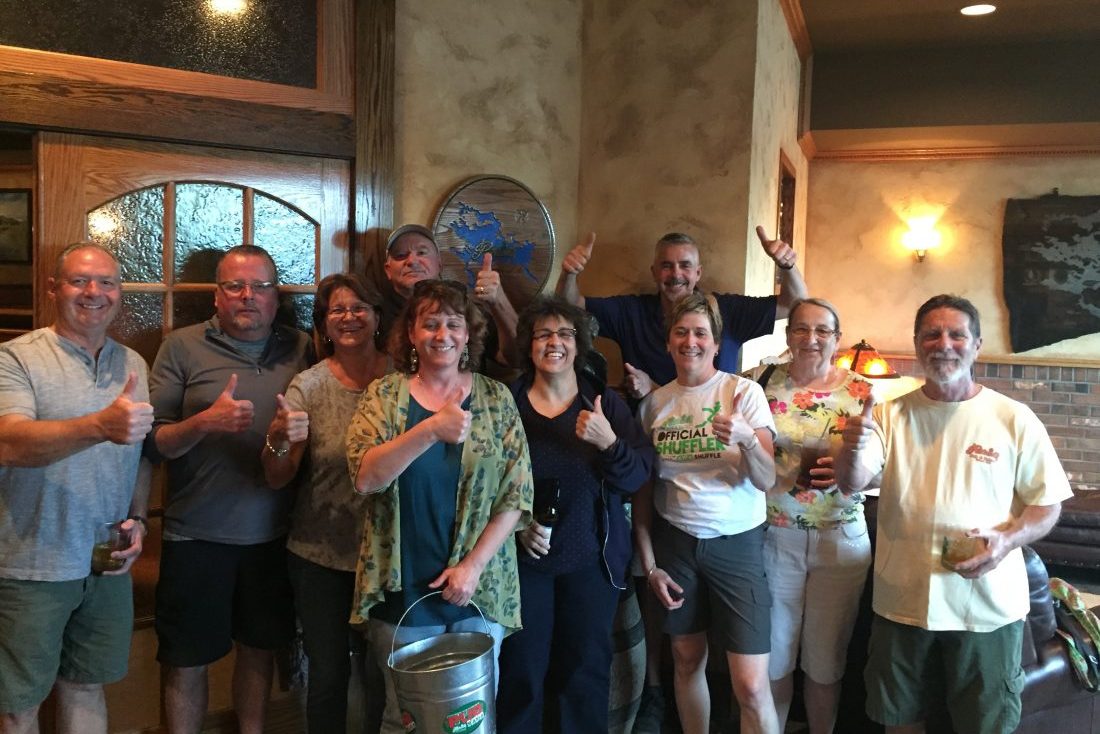 GILFORD—When Kate Flaherty moved back to New Hampshire from Massachusetts in 2015, she was drawn back into the fold by her longtime friends at Patrick’s Pub & Eatery as a volunteer for the Pub Mania Shuffle and the Pub Mania event itself.

These days, Flaherty’s face is often the first one that new members of Pub Mania teams see when they arrive in the pub parking lot to Shuffle on a Wednesday evening in the spring or fall, and it’s Flaherty who offers the welcome and draws people in.

“Every time we do a Shuffle, we always meet new people; they come down because they’ve read about the event in the newspaper,” said Flaherty, who mans the ticket booth at the Shuffle along with fellow volunteers Jennifer Beetle, Jennifer Bailey, and Lisa Cornish.

Flaherty’s Shuffle story, and that of the fundraiser itself, is told online at www.patrickspub.com in a new blog Patrick’s launched on Aug. 13.

Flaherty said they all enjoy telling Shufflers how the two-mile walk/run supports Pub Mania, which, in turn, provides a large portion of the proceeds for the Greater Lakes Region Children’s Auction. Last year, Pub Mania raised $303,630 and has raised over $1.6 million in its first nine years.

This spring, the eight Wednesday Shuffles raised $9,020 for the 2018 Pub Mania event, bringing the five-year Shuffle total to over $52,000. The fall Shuffles begin tonight and continue through Oct. 24. All are welcome to attend.

“What I have noticed is that the Shuffle gets people from different parts of the Lakes Region together, and our common goal is making this beautiful place even better and helping children who need our support,” Flaherty said.

“Many people don’t know about Pub Mania or the Children’s Auction,” she added. “It’s always a conversation I have that starts with, “Did you know…? We love telling that story.”

This because the Pub Mania story is an exciting one.

Fundraising by Pub Mania’s 33 teams is ongoing all year, bolstered by the Shuffle, which Patrick’s launched in the fall of 2013 to bring more fun and healthy competition into the mix and to keep the Pub Mania conversation going all year long.

Flaherty said everyone does the Shuffle differently. Some people make the $10 required donation and walk the two-plus-mile course that begins at Patrick’s, heads to the Bank of New Hampshire Pavilion, and winds back. Others run. And some people simply take their raffle and complimentary drink tickets into Patrick’s to have a drink and check out the menu and the specials.

“People can get what they want out of it,” Flaherty said, noting that after Beetle has biked the course and made sure everyone made it back safely, Shufflers have their cocktail, usually with apps or dinner, and hope to win a Patrick’s Frisbee or sweatshirt in the raffle. “They give away good stuff.”

Pub Mania teams have fun competing in the Shuffle over how much money they are raising and how many team members show up to take part—just as they do in the 24-hour event.

Flaherty said her job as Shuffle ticket master is an easy one, but she does have to pay attention. “I have to give out three raffle tickets and one drink ticket to each person—and not the other way around,” she jokes.

The Shuffle has been around long enough, Flaherty said, that it’s become a tradition for many. “It gives people in the community a chance to connect with one another while exercising and raising money to help people in need at the same time,” she said, adding, “I’ve learned from Jennifer and Allan that fundraising can be a lot of fun. It doesn’t feel like work.”