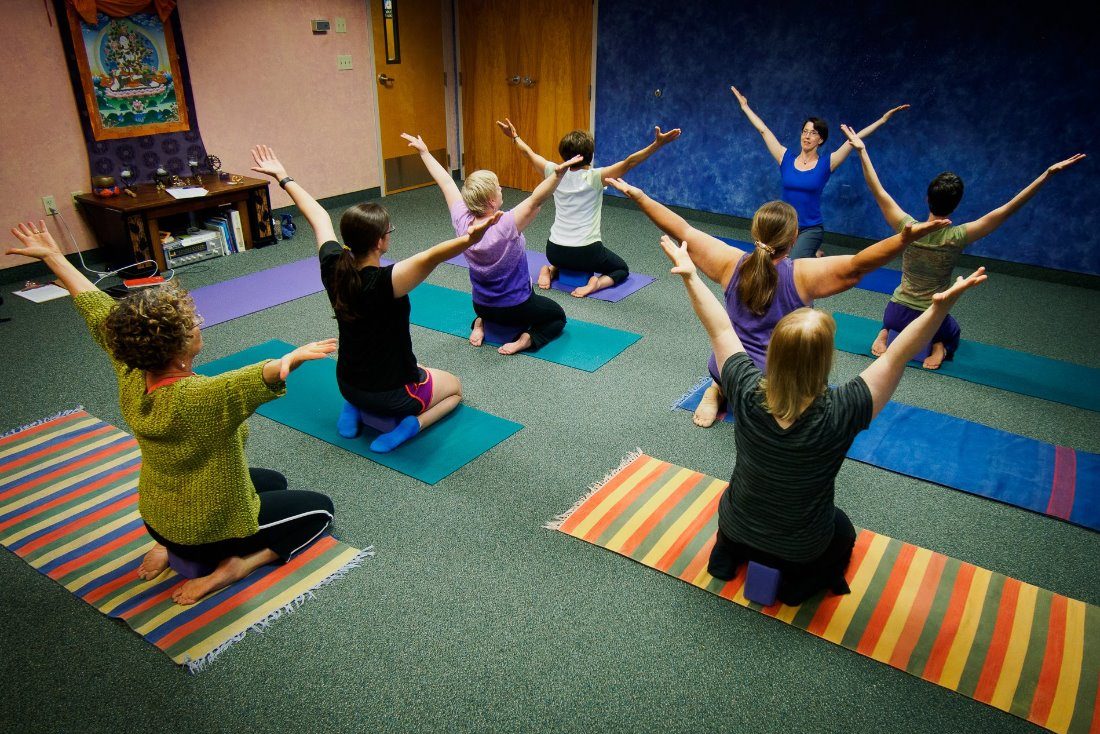 AMHERST—Ginny Hamilton was diagnosed with scoliosis at 9 years old and suffered chronic issues with neck and jaw pain for most of her life. For years, she tried—unsuccessfully— to reduce painful spasms using standard western medicine as well as alternative approaches.

Five years ago, acting on a tip from a friend, Hamilton, now 47, met in a private session with Lee Albert, a pain specialist at the Kripalu Center for Yoga & Health in the Berkshires. What Hamilton learned allowed her to keep the pain at bay in a way that was “incredibly gentle and simple.”

A pain specialist herself who uses yoga and reiki as treatment modalities, Hamilton wanted to learn Albert’s treatment method, and on Oct. 15, after 300 hours of study, she was certified as an Integrated Positional Therapy Professional in the Albert Protocol for Muscle Pain Relief.

“It worked for me, so I wanted to go deeper to understand it for myself,” said Hamilton, now one of 18 people with this certification, earned after four levels of classroom instruction with Albert and 200 clinical hours, during which Albert supervised her practice on individual clients. “IPT has put my care in my own hands, and now I can teach others how to manage their pain.”

Hamilton, of Amherst, owns Ginny Hamilton Yoga and has been a Registered Yoga Teacher since 2010. She has also been studying reiki since 2013 and is currently an apprentice with Haleya Priest at Sanctuary Healing Arts Center of Amherst, seeking to become a Certified Reiki Master Teacher; she is on track to receive the credential in 2018.

Hamilton works with people in group classes, one-on-one, and she also leads workshops in the workplace. Her work is based on the philosophy that most chronic pain is caused by muscle imbalances in the body—from sitting, driving, typing, texting and other repetitive motions.

In working one-on-one with people, Hamilton said she first holds a two-hour session with a new client to hear about their physical challenges; the session includes at least one hour of Integrated Positional Therapy bodywork and reiki, received by the client while fully clothed on a massage table or yoga mat, and the session ends with a personalized wellness plan.

“Muscles work in pairs,” she explained. “We often tend to have one stronger than the other because of how we use our bodies every day. These imbalances can create muscle pain. It’s about knowing what to strengthen, what to stretch, and specific body positions to slacken and release muscle tension.”

Hamilton’s group classes are also built on the stretch-and-strengthen principle. She leads a class at the Hadley Yoga Studio in the Hadley Health Center on Route 9 on Fridays at 10 a.m., with drop-ins welcome, and at Serenity Yoga Studio in the South Hadley Village Commons, in six- or eight-week clusters on Thursdays at 7:30 p.m.

Students rave about Hamilton—as much as Hamilton raves about Albert.

Norma Friedman in South Deerfield, a student in Hamilton’s yoga classes and a private client, is a retired professor who has several physical ailments that cause chronic pain, including scoliosis and spinal stenosis.

“Those two things, on top of a work lifestyle that had me sitting, reading, and working on the computer, has caused me to have pain all 40 years of my adult life,” Friedman said. “I’ve tried a variety of modalities, and there was really nothing I could do about it except work on posture issues.”

Several years ago, Friedman attended Hamilton’s yoga class. “Within two sessions, the knots in my back were completely gone. Even my physician noticed I was sitting taller. I started to work with Ginny on a one-to-one basis,” Friedman said. “I have found remarkable results. It is just incredible, loosening muscles when they get too tight. It seems so logical to me that the stronger my back muscles become, the straighter I stand and the better I feel.”

Hamilton also leads workshops in schools and businesses around the Valley. Diane Chamberlain, the principal of Fort River Elementary School in Amherst, brought Hamilton in this fall to lead a self-care workshop for staff during a professional development day.

“There was a 100 percent success rate,” Chamberlain said. “Ginny was fantastic and lovely and receptive to different questions people had. It was a great educational opportunity for our staff, and they learned stretches they put in practice right away for themselves, and they are also teaching what they’ve learned to students.”

Likewise, Kara Noonan Pear, director of Human Resources at Noonan Energy Corporation in Springfield, said Hamilton led workshops for about 35 employees in March and May after a technician—who she helped with a muscle-release suggestion while he was servicing her boiler—raved about what he learned.

“She showed them stretches to do on the job and at home,” Noonan Pear said. “I wasn’t sure how the techs would respond. I thought they might be cynical or skeptical, but many employees came to me and thanked us for doing the sessions.”

Hamilton is the former executive director of the Fair Housing Center of Greater Boston and the former policy director of the Massachusetts Coalition for the Homeless. She holds a bachelor’s degree in sociology from Tufts University. She writes a parenting column for the award-winning Hilltown Families blog.

She is a member of the International Association of Reiki Practitioners and the Yoga Alliance.

For more information, visit ginnyhamilton.com or contact Hamilton at 413-253-0949 or ginnyhamiltonyoga@gmail.com.