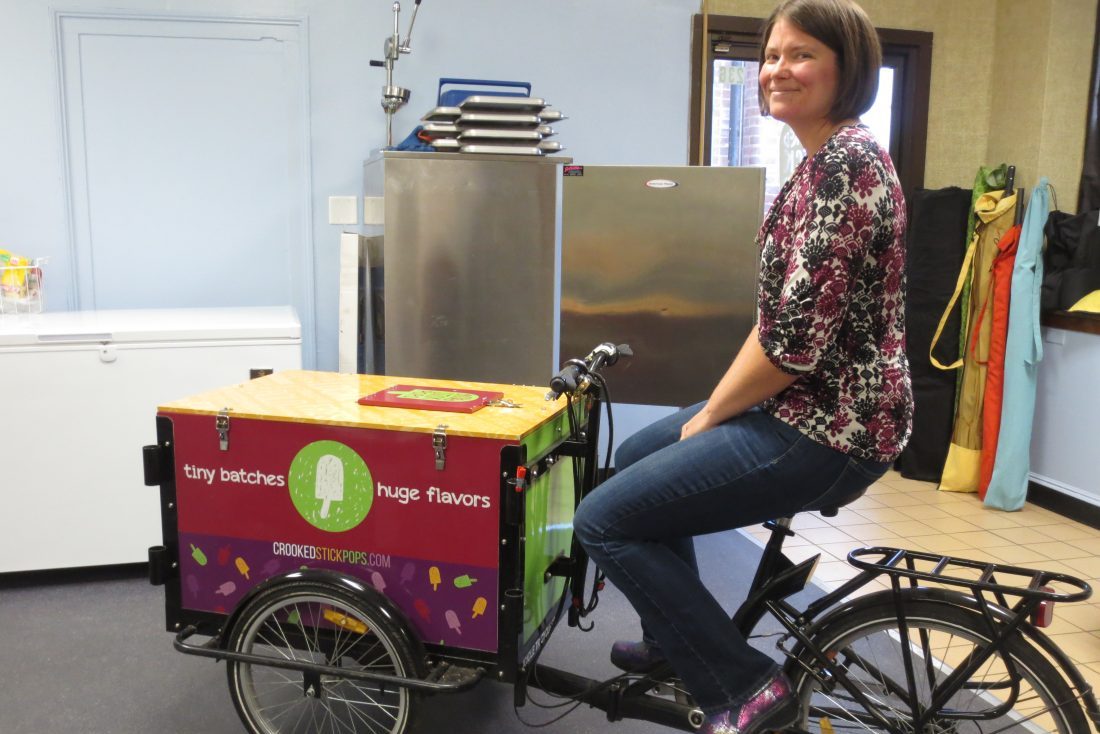 One of my favorite aspects of writing for the Springfield Republican’s annual Outlook section is having the chance to meet and interview a wide range of business owners. I am always listening to see what I might learn from them and enjoy the chance to expand my own network of business leaders.

In addition to Lili Dwight, this year I also wrote about Julie Tuman and her business in Eastworks, Crooked Stick Pops. The day I interviewed Julie, I also bought three pops, which I have since devoured. I had chai, key lime, and orange creamsicle.

I recommend you check her out this spring and summer. She also visits area fairs and events. Be on the lookout for a woman on a cart that looks like a giant tricycle. That will be Julie!

Also, here’s a fun story that didn’t fit in the Outlook piece:

Julie named her business Crooked Stick Pops because, in the beginning, she had a great deal of difficulty getting the pop sticks to freeze in a straight position; she figured the name would make it seem intentional. She later purchased a machine that ensures straight positioning, but the name was already set in stone, so, she adjusted her machine. The sticks are indeed crooked!

Julie Tuman’s inspiration for her Crooked Stick Pops comes in part from her experience with mixing interesting cocktails as a pastime. Her sense of smell plays a big role as well. In the summer, she’s apt to be found walking around a farmer’s market, holding local peaches in her hand while sniffing other vendors’ wares for the right companion flavor. This is how Tuman landed on her peach and goat cheese pop last summer.

“I get bored easily. I can’t just do strawberry-lemonade,” Tuman said, noting that she uses her entire range of spices in her frozen treats, often incorporating clove, ginger and star anise, as well as herbs. Because she is creative—and her pairings work—Tuman said her customers have learned to trust her sensibilities.

Tuman’s three-year-old venture is mainly mobile spring through fall; she takes a cart to festivals, fairs and farmer’s markets. Ten months of the year, a shop in the Eastworks building of Easthampton—where Tuman also lives with her husband, William—supplements sales of pop, which contain ingredients from local farms. Flavors include Maple Pear, Blueberry Lavender, Strawberry Sriracha and Bourbon Caramel Peach.

At 41, Tuman finds herself in an entrepreneurial role that couldn’t be further from her academic studies or the first several decades of her career. She holds a bachelor’s degree in Asian history from Appalachian State University in North Carolina, and a master’s degree in Chinese from the University of Massachusetts, Amherst.

Tuman previously worked for nonprofits that ensured compliance at overseas organizations. She was charged with ensuring these businesses were not violating human rights or labor laws. “The stakes were high,” she said. “If you made a mistake, a child could end up working in a fireworks factory.”

She later marketed organizations that provide international education and study-abroad opportunities for college students. She traveled a great deal and was experiencing burn-out after several organizations she worked for went through mergers and buy-outs.

In the fall of 2015, Tuman decided to launch her own business. Inspired by her love of cocktails, and a pop shop in St. Augustine, Florida, she landed on her idea to make frozen treats. She employs eight people as seasonal, part-time workers and runs her shop March through December. “I need January and February to recuperate,” she said.

Tuman said what sets her wares apart is that they are fruit-based; she flash-freezes local produce in a commercial kitchen she operates in the nearby Keystone building and will not supplement with fruit from outside the region if she runs short. “Even pops in December are made from strawberries from Sunderland,” she said.

Selling at $3.50 each, 3 for $10, or 10 for $30, Tuman’s pops cost more than those one would buy in the grocery store. Hers, though, are low in sugar and do not contain water and artificial flavors. In addition to bad weather that keeps thirsty buyers away, helping customers understand the cost is one of the challenges she’s faced. Tuman said, “Great fruit makes great pops. Mediocre fruit makes mediocre pops, so I only get fruit when it’s in season and at its best.”