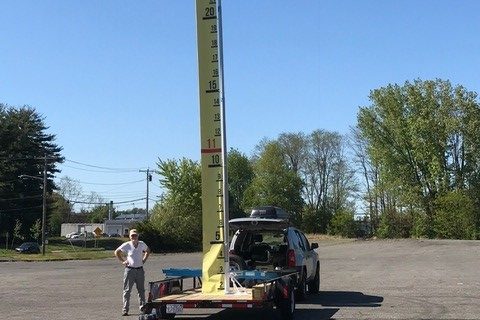 “I simply hope to make people aware of the reality of sea level rise, as it is a unique part of the global warming discussion,” said Valetutti, of Easthampton. “People tend to not focus on sea level rise because, at first glance, the daily effect is insignificant, but ice melt has a cumulative effect.”

Valetutti stressed how rapidly sea levels could rise in our world and how little the problem is discussed. “Sea level rise is real. It is scary, and there is no way to time it,” he said. “Mother Nature can work fast.”

The movable educational tool has been parked in Northampton, and Valetutti also hopes to take it all along the East Coast to raise broader awareness.

A retired professional engineer with a passion for energy conservation, Valetutti keeps current on the science of climate change and awareness and was inspired in 2019 by young activist Greta Thunberg, who lives Sweden.

“I wanted to take a stance on the side of climate change that is not always talked about—rising sea levels due to global warming,” he said.

With his engineering background, Valetutti designed and constructed the traveling flagpole assembly that holds the 30-foot high banner that replicates a ruler, with exact measurements in feet.

“I marked the 11- and 22-foot levels in red, because those indicate where our sea level would rise if only 5 or 10 percent of Antarctica and Greenland were to melt,” he said, adding, “When people stand next to the flagpole and see how high that really is, it shows how legitimate and scary the reality of rising sea levels is. If sea levels rise this much, we will face an economic disaster that will be very significant, drastically changing the world as we know it.”

Valetutti hopes to reach concerned groups across the country and have them help share his project and message. To learn more, visit www.sealevelriseruler.com