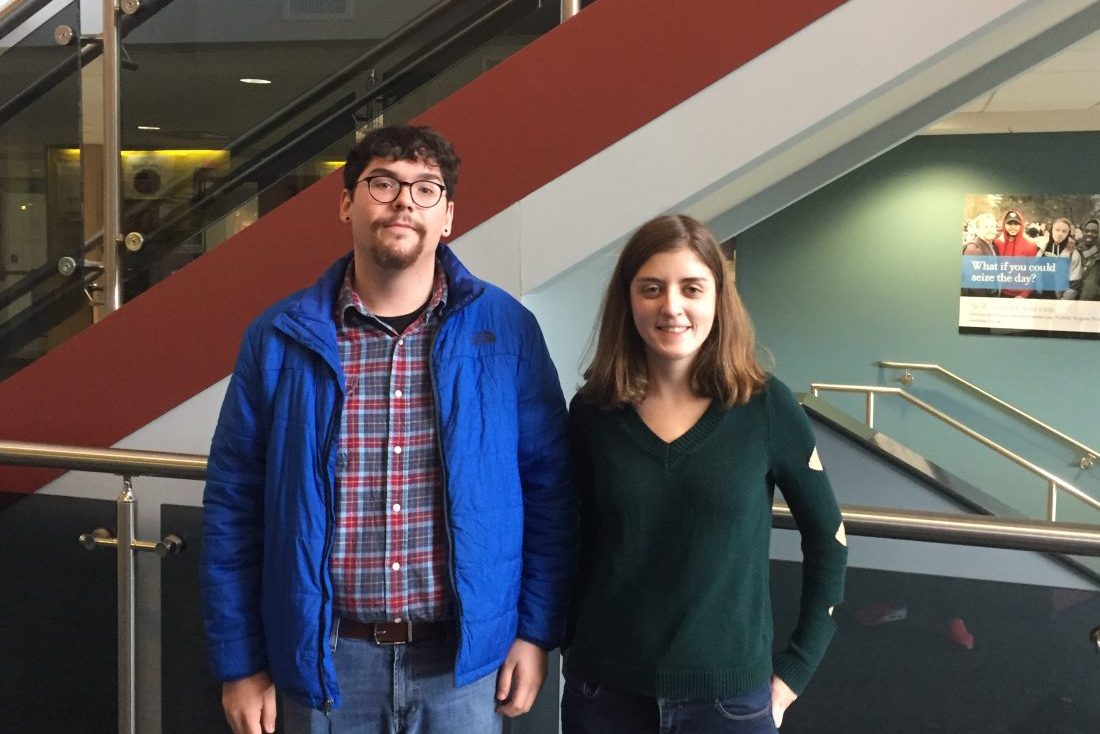 The beginning of the fall semester signaled another beginning for Beetle Press in that two new interns came on board in September. They are Colleen Looby, a senior at Westfield State University, and Nicholas “Nick” St. Pierre, also a senior at my alma mater.

I interviewed both students in the summer. What I usually look for in the interviews is not skill or experience but hutzpah, and I felt they both had it. Nick had a lot of energy and excitement about all facets of the work—from the creative writing and editing pieces to developing press releases and blogs. Colleen had a quiet confidence and a deep interest in several manuscripts I am working on.

Let me introduce Colleen and Nick to you.

Colleen is a communication major and writing minor at Westfield State. This is her second internship, having worked last summer as a marketing intern at Building Engines in Boston, where she learned much about the world of software creation.

The Beetle Press internship interested Colleen because she loves to write and hopes to one day develop a series of books. So far, in addition to various broad-scope tasks, she has helped to copyedit a manuscript that is now in the design phase, contribute to social media posts for Beetle Press and JaniceBeetle.com, and she has written a press release for TEDxEasthamptonWomen.

Colleen became interested in being an editor in high school. “I thought this internship would help me learn how to bring a manuscript to life and could also expose me to talking with different people and listening to more of their stories,” she says.

One new learning for Colleen has been interviewing people for blogs and press releases. “It can be a little nerve-wracking when you’re not used to it,” she says, adding, “Although, it’s more likely that the person on the other end of the phone is a lot more nervous.”

Colleen’s dream career is to be an editor at a book publishing company. Once she graduates, she would be interested in a writing job and is considering journalism (my roots) as well.

Nick originally pursued the idea of teaching English at the secondary level, but his experiences early on in his college career persuaded him to follow a different road.

Focusing now on becoming a better writer—creatively and professionally—Nick has narrowed the concentration of his degree to writing.  Following this path is what led him to become one of my interns.

Nick has experience with business and technical writing, but he says that “the work I’ll be doing for Beetle Press is going to provide me with some serious experience in the professional writing world.”  He also is helping to ready a client manuscript for publication, and he has done several research projects for Clarke Schools for Hearing and Speech, and written several press releases and blogs based on interviews he conducted.

Nick learned about the Beetle Press internship from Michael Filas, one of Nick’s Westfield State professors. Nick expressed an interest in developing his skills in the realms of public relations and freelance writing, and Michael suggested interning at Beetle Press as the perfect opportunity.

Nick hopes he will gain a variety of knowledge and skills that will prove useful later in his career as a writer, and he knows Beetle Press is the place to cultivate such tools.  “I am extremely grateful for this opportunity to grow as a writer,” he says.