The Evolution of a Book Name and Cover Design 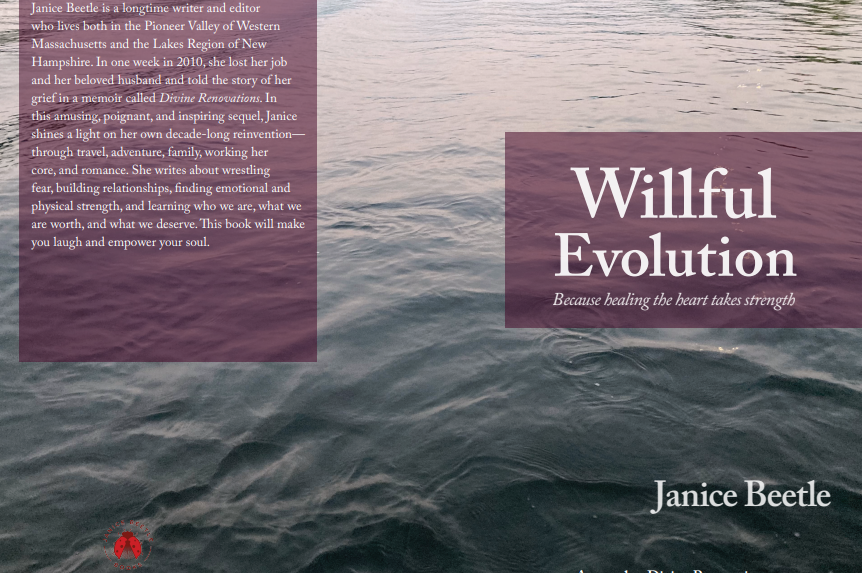 As I considered a name for my first book, I went through a process that was methodical but not very productive in terms of getting me to a name I loved.

After months of thinking and brainstorming words and combinations, I still had nothing that rocked me. Then, I passed by a religious compound in the Berkshires with “Divine” in its name on a walk with my friend Judith Kelliher and her brother Bill. And it came: Divine Renovations. A perfect name for a spiritual-leaning book about a carpenter, a home renovation, and a life renovation.

I went through a similar process in naming my second book. With friends, colleagues, and interns, I brainstormed words and word phrases, and dreamed up titles and subtitles. Nothing felt quite right, but I landed on Core Strength: Because healing the heart begins in the center.

While that name said it all, the people counseling me and I thought potential readers might think the memoir is about physical fitness when in fact it’s about personal growth and transformation.

Also, “Core Strength” is a common phrase. I wanted a zinger.

One week, over the course of a few days, I was relentless in bringing the book title topic up with my husband, Steve. He’d listen to me, offer suggestions, and listen some more. Still, nothing popped.

Then, I started designing the book’s front and back covers. I sent design options to Steve, my daughters, my interns, and my thought-leader friends. I got big rejection stickers over the images I was choosing, which were from travels only mentioned in the book but which said nothing about the book’s purpose.

My daughter Sally suggested a photo of water—like from the river I boat on in Western Mass, the Connecticut. I played with that idea in designs, using photos that showed an entire landscape—water, trees, the river’s edge. It still felt wrong.

“Ask one of your designer friends,” my daughter Molly said.

So, I took the whole title-design problem to Maureen Scanlon, who has partnered with me on some client books, such as Seasoned and Hand, Horse, and Motor. In a fifteen-minute phone call, Maureen steered my focus away from Core Strength and random images by suggesting that this second book be marketed as a sequel to Divine Renovations, which indeed it is. The first book tells the story of the death of my late husband, Ed, and the second, the story of the next decade.

Further, Maureen suggested that the image could be parallel to that on the cover of Divine Renovations: something meaningful that also has great detail. I knew it had to be a water shot, as Sally suggested, and then I knew it could be close-up, showing movement, since the book is about getting from one place to another, in my spirit.

I went back to the name-drawing board with poor Steve. Every time a new combination came to me, I’d throw it out, interrupting normal conversation. Then, I threw out Willful Evolution: Because healing the heart takes strength.

Like I saw on the dating app, Bumble, when I was matched to Steve over two years ago, there it was: Boom. Just in my mind and not on my phone screen. We both knew that was the name.

That night, Steve and I went out on the boat, and we both took dozens of photos of just the water—nothing on the landscape. I got the one that appears on the cover at dusk. The engine was running, creating the rings and bubbles in the foreground, and a boat had just passed, creating the waves.

In the design, I drew out the pink in the water with a magenta screen, and I used the same parallel design from Divine Renovations, which was developed by my friend Lisa Stowe.

This book is coming soon. I’m guessing October or November. I was delayed by my move to a new home later this month.