Helping an Author Get His Book Out 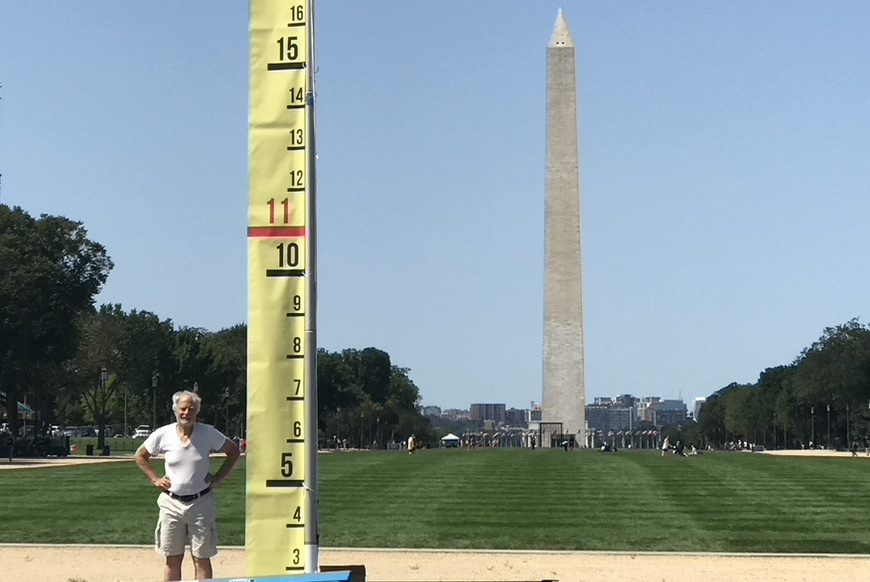 Vincent “Vinny” Valetutti is my friend Becka’s partner. I met him several years ago when he offered to drive our entire book group to a vineyard in a van so we could all relax and enjoy. Meeting all of us for the first time, Vinny was friendly and pleasant, and also a good driver!

This spring, I assigned a student intern working with me in my PR business to interview Vinny and write a press release on the traveling, thirty-foot-high, mock Sea Level Rise Ruler he created to raise awareness about rising sea levels. When standing next to the ruler, one has a close-up, dramatic view of how high the sea would rise if only five to ten percent of Antarctica and Greenland were to melt.

Vinny towed his ruler on a trailer and parked it in a lot in downtown Northampton, Massachusetts, so people could visit it and learn more about one impending circumstance of climate change. Earlier this month, he towed his giant ruler to Washington, DC.

Helping get some media attention on this innovation gave me a deeper view into the mind that is Vinny’s. So, when he contacted me a few months after his initial outreach and asked for help with a book, I was interested in working with him. I have since learned much about the man behind the ruler.

Vinny grew up north of New York City and began to be fascinated by how things work at a young age. A retired engineer, Vinny has a great deal of experience in energy conservation and with heating, ventilating, and air conditioning (HVAC) systems in office buildings.

Vinny’s career and his travels inform and inspire ideas of all kinds. As he imagines, he meshes his deep passion for the environment with his knowledge of history and politics, his global savvy, and his lifelong experience as a pragmatic, creative problem-solver.

His book, due out this fall with a working title of If I Were President: 29 Unique Ideas for Solving Global Problems. As the name suggests, Vinny offers 29 ideas in his book, presented in these eight categories: Invitation to All World Leaders, Military, Constitutional Amendments, Capitalism, Social Issues, Energy Conservation and Environmental Protection, Taxation, and Patents.

Many of the ideas are interconnected. Some have the basic premise of supply and demand at their core, and others were inspired by Vinny’s take on the bible from his childhood learnings.

Vinny says he sees the world differently. His lens doesn’t focus solely to the left, or the right, and it also doesn’t land in the center. “Think of my mind like a sphere,” he explains. “You have a diameter, and you have the right hemisphere and the left hemisphere. I’m anywhere in the volume of the sphere. Sometimes, I also think outside the sphere—kind of like thinking outside the box. I’m a warehouse of boxes, and sometimes, I think outside the warehouse.”

I offer the disclaimer that the Janice Beetle Books indicia on the book jacket does not signify an endorsement of the specific ideas within but rather wholehearted support of the author’s creativity and innovative thinking.

I hope you’ll check out this title when it’s released. It’s interesting reading in difficult times.