Thornes Marketplace to Become a Canvas for Wall Mural 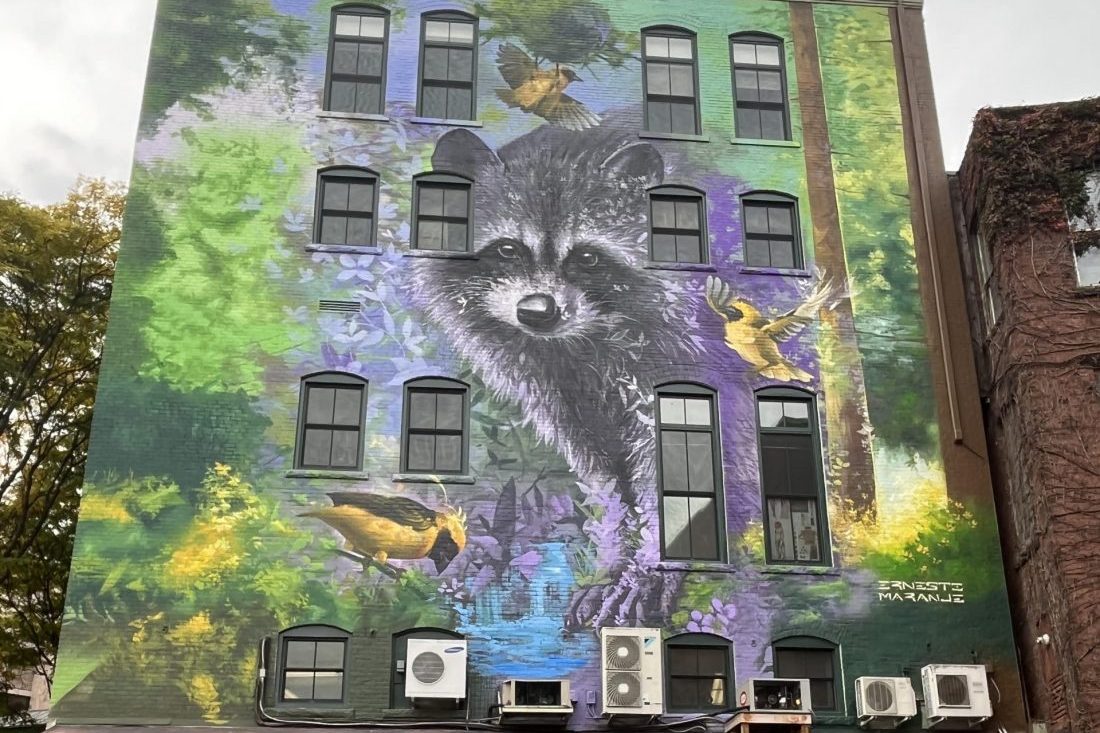 I have been the PR partner for Thornes Marketplace for about six years now, working with Jody Doele, co-owner and marketing director of the historic and eclectic shopping center in Northampton, Massachusetts. My work is to help brainstorm topics for press releases, then develop and distribute them. When the release has gone out to the media, I also repurpose the story as a blog, which Thornes posts on its website. This release about the new wall mural behind the Thornes building drew a record high media response. It was sent to the media in late September 2022, and the mural was completed in October 2022.

The back side of Thornes Marketplace will soon become a sprawling canvas for a Florida artist who will paint one of his nature-inspired works of art on the 67-foot-high by 50-foot-wide structure.

Chosen from a field of 87 applicants for the $20,000 project funded by a grant from the city of Northampton, Ernesto Maranje will begin his work at the end of September, and it is expected to take roughly two weeks to install the art. His design features weaver birds and raccoons, created with layers of much smaller images of flora, fauna, and creative touches.

“Weaver birds have continuously been a symbol in my work. I imagine that they are the ones constructing my pieces, weaving together leaves, twigs, flowers to create the finished piece,” Ernesto said. “The weaver birds are the composers of the design.”

He is excited about the shape of the east exterior wall of Thornes, adjacent to the parking lot and the entrance to the parking garage and is excited that the façade has a lot of windows—16 to be precise. “I like that challenge,” he said.

The finished mural will cover the entire back side of the building, from the parapet to the ground, including the space under the roof and awning.

A $20,000 grant from the city of Northampton will be expended to cover the fee for Ernesto’s services and supplies, and Thornes will cover the roughly $6,000 in other costs associated with the project. Jody Doele, marketing manager for Thornes; Brian Foote, director of arts and culture for the city of Northampton; and Mi Belitsky, a member of the Northampton Arts Council, reviewed all 87 applicants and chose Maranje’s work.

“Thornes is super excited by the project,” Jody said. “Northampton’s continued vibrancy and relevancy are important to all of us, especially at this point in its history. We believe public art adds enormous value to the cultural, aesthetic, and economic vitality of a community.”

She added that Northampton’s downtown faces economic and social challenges currently, and as a dominant retail player in the downtown, Thornes wants to help insert vitality and positive change. “Thornes remains committed to doing what it can to help Northampton thrive,” she said.

Brian said the grant was funded by two donations from D.A. Sullivan & Sons, Inc., both earmarked for mural art, and he noted Thornes owners have for several years expressed interest in hosting a mural.

“It’s great to see building owners excited to invite mural art, and D.A. Sullivan & Sons has been a longtime supporter of projects intended to improve the city for everyone,” Brian said.

He noted that last year, the city was involved in installing two murals on Short Street and Kirkland Avenue with permission and support from Jordi Herold, owner of the Iron Horse Music Hall and a developer of historic properties in Massachusetts.

Ernesto, of Sunrise, Florida, will travel to Northampton with his wife, Hilary Maranje, his business partner, from Tennessee, where he is currently painting. He said he began exploring art as a vocation in 2012, when he was serving as a diesel mechanic in the U.S. Coastguard and became injured; he was assigned to work on land, doing odd painting jobs.

“One of the painting tasks was to paint the California flag on a pair of window shutters,” he explained. “Someone had started the job, setting up a grid on the shutters, and then transferred the project to me. Basically, from that day on, I’ve never stopped painting. I fell in love with it. I started going home after work and painting.”

Ernesto took art classes at the Art Institute of Miami for several years before he was invited to take part in mural festivals in Europe and the Middle East. Along with other invited artists, from 2015 to 2018, Ernesto painted murals on walls, residential houses, and the sides of buildings in communities with orphanages and refugee camps.

“The goal was to lift spirits and expose children to artwork,” Hilary said.

The festivals were not paid jobs; they provided Ernesto with experience—and stipends. By 2018, he was being commissioned by companies and developers for paid projects, and he launched his own company; his wife manages the business side of the operation.

Ernesto mainly paints murals with acrylics and spray paint and has created roughly 80 murals to date. He also does smaller gallery work.

“The inspiration comes from different avenues,” he said. He enjoys the hard work that comes with painting murals—lifting, walking up stairs, waking up early. “Another inspiration is seeing the final product—seeing the wall complete and being satisfied with completion. Inspiration for the subject matter comes from biology. I have a fondness for evolution and species. There are lots of animals and organic elements in my work.”

In the request for proposals for artists, the artwork goals were to create a decorative, large-format design that is visually captivating and will promote goodwill and tourism. Artists were asked to create a design that is not Northampton-centric in terms of history or geography.

The city requires that Ernesto will use Smog Armor paint and primer products on fifty percent of his final work because it is proven to reduce air pollution and is non-toxic. Two coats of paint are also required.

To learn more about Ernesto and his work, visit www.maranje.com.