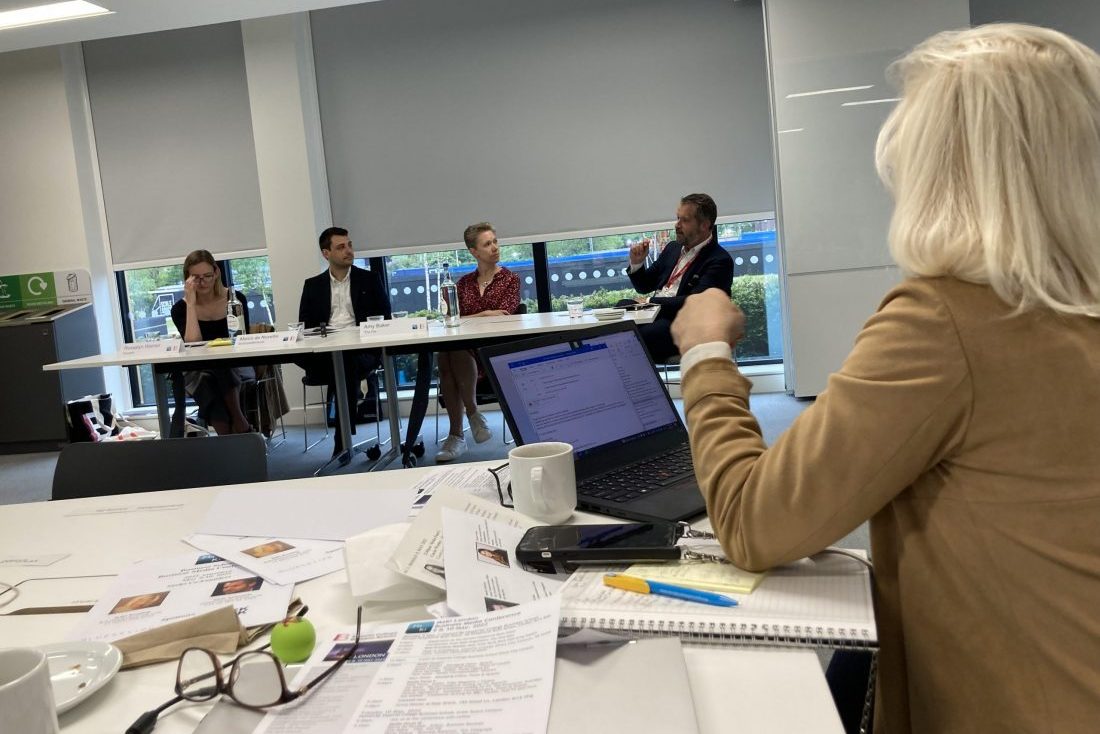 Kiki Keating and I arrived in the Shepherds Bush section of London on May 7, a few days before the MakiNetwork Business Media Conference was to begin. A world traveler, Kiki has been to London many times and served as a good guide in the taxi!

After dropping our belongings in our room about 8 p.m., we wasted no time heading down to the conference room in our hotel, where the first portion of the event would take place. We spent a few hours packing the tote bags—branded by our conference hosts, Imperial College London—with the event agenda, attendee and journalist bios, and fun giveaways. Then, we found a place to eat a late dinner and had a drink at the pub on the corner—until it closed.

We had a day of play on Sunday, traipsing around the city, and then work began first thing Monday morning, as attendees registered, received the goodie bags we’d packed, and settled in for 48 hours of intense learning.

Marketing and communications professionals came from the US, Canada, France, Germany, Amsterdam, Ireland, and England but there were also attendees from as far away as China and Singapore.

Journalists were presented in groups of three or four on six different panels over the two days, representing top-tier outlets such as Reuters, Forbes, the Financial Times, and BBC News. They spoke to us openly and honestly, passing on everything from the types of stories they are interested in to how they want PR folks to reach out to them.

One theme that resonated with all journalists was the future of work—what models are becoming the norm in our sort-of-post-Covid world and how are these changes affecting businesses and families? And in terms of keeping in touch, they all stressed PR professionals should keep their pitches brief and make sure they are succinct, clear, and well-communicated. They all also noted that because they get hundreds of emails each day, they respond to pitches less often.

In addition to taking in the information being served up, I enjoyed watching Kiki and her Maki co-founder Matt Symonds at work. Kiki has an ease with people; attendees were eager to speak with her and spend time catching up, and she easily shepherded them, answered questions, offered add-on information. Matt introduced the panels and made us laugh often with his witty repartee as he offered questions to our esteemed panelists.

Together, Kiki and Matt ensured that attendees and speakers alike had a positive experience, felt welcomed, and got what they needed from the event.

Kiki and I are a lot alike, personally and professionally, except that Kiki’s sphere of influence and the circles she runs in are far broader. While I excel at promoting clients across New England, Kiki’s reach is global. And while I’m fast, efficient, and enjoy learning and growing, Kiki can outpace me in these areas as well. I am known as a person who introduces groups of women from various sectors to build relationships, but Kiki has friends and colleagues she has drawn together around the world; she is well-known as an inspiring, empathetic, wise machine.

Very humbling. And lots of fun.

While we worked hard, we also played hard.

I enjoyed taking in the history of London, visiting key landmarks like the iconic Globe Theatre, where we saw “Much Ado About Nothing”, and walking along the Thames and crossing London Bridge; visiting a museum, however briefly; and sampling all kinds of wonderful food.

I lived and learned. What a beautiful combination.

If I am lucky, the Maki Conference in Singapore in December will be in my future.